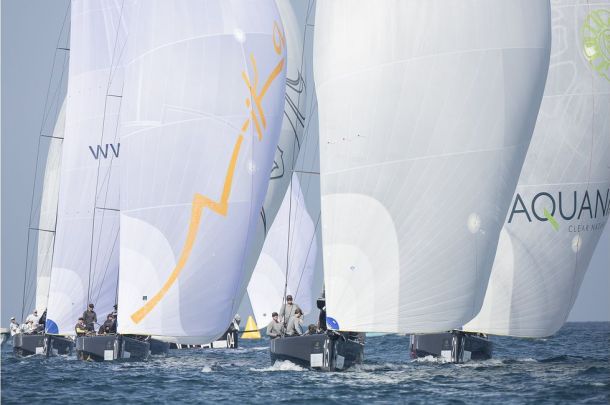 With less than a month to go, eleven teams are eagerly anticipating the 2015 RC44 Championship Tour season-opener set to take place in Malta's renowned capital of Valletta, the historic 'City of Knights', from 25-29 March.

The crew line up for the RC44 Valletta Cup reads like a who's who of sailing greats and top international businessmen, guaranteeing that it will be a highly competitive fleet racing right in the heart of the Mediterranean.

While the majority of teams have opted for strategic consistency, retaining the same crew as last year, a few key changes promises to mix things up.

Team Aqua remains the boat to beat, starting off 2015 as the defending Tour Champion for the fourth consecutive year. Chris Bake will be sharing the owner-driver role with Sweden's Richard Goransson this season, while top match racer Cameron Appleton remains a permanent fixture as tactician.

The increasingly competitive fleet, however, is sure to challenge Team Aqua for event wins and Championship titles.

Following an extremely strong first year in the Class, Nico Poon's Charisma will be vying for a podium position after finishing fourth in the 2014 Tour. American Olympic silver medallist Morgan Reeser will be joining the team as tactician, replacing Tom Slingsby whose focus is back on his America's Cup programme with Oracle Team USA.

Reeser said: “The RC44 class has a fantastic reputation as being incredibly challenging while also offering a friendly and welcoming environment. I can't wait for the first event in Valletta and being part of the team onboard Charisma for the 2015 Tour.”

A consistent challenger at the top of the RC44 fleet since joining the Class in 2008, Team CEEREF are returning to the Tour after taking a break for the duration of the 2014 season. Owner Igor Lah had made a one-off guest appearance last year to take the helm of Bronenosec and win the fleet racing at the RC44 Sotogrande Cup.

With a taste of victory, Lah and his team are looking to improve and will be pushing for the podium this season under the direction of new tactician, Britain's Adrian Stead.

Stead commented: “I'm looking forward to joining Team CEEREF along with fellow RAN sailors, Matteo Auguardo and Jon Gunderson. As a team, we'll be aiming for consistency and pushing to get as many top results as possible in this competitive fleet at the RC44 Valletta Cup.”

Having finished 2014 on a high by securing the RC44 Oman Cup with a race to spare, Team Nika is aiming to keep the momentum going by welcoming America's Cup sailor Dean Barker onboard to call tactics in Valletta.

Current RC44 World Champions, Bronenosec Sailing Team are a strong, up and coming team owned by Vladimir Liubomirov, commodore of the Yacht Club of Saint-Petersburg. With Italian America's Cup sailor Michele Ivaldi calling tactics by his side, Liubomirov and his team will be ones to watch to challenge Team Aqua's Tour title.

Double Olympic gold medallist and America's Cup Team Manager Iain Percy will once again be leading Artemis Racing alongside owner Torbjorn Tornqvist. The team will be looking to improve on last year's results as they embark on their second year of the Tour with the same crew.

Peninsula Petroleum Sailing Team is a serious contender this season after really pulling together as a team in 2014 and finishing second overall in the Tour, a personal best since joining the Class in 2010. Having briefly taken the 'golden wheels' off Team Aqua at the RC44 Cascais Cup last season, owner John Bassadone will be pushing his team to reclaim the coveted prize.

Katusha, MAG Racing and Anywayanyday are relying on their experience within the Class and maintaining the same crew as a way of climbing the ranks. All three teams have the potential to mix it up at the front of the fleet and will be looking to steadily progress throughout the season.

For more information on the teams competing in the RC44 Valletta Cup visit: http://www.rc44.com/teams.