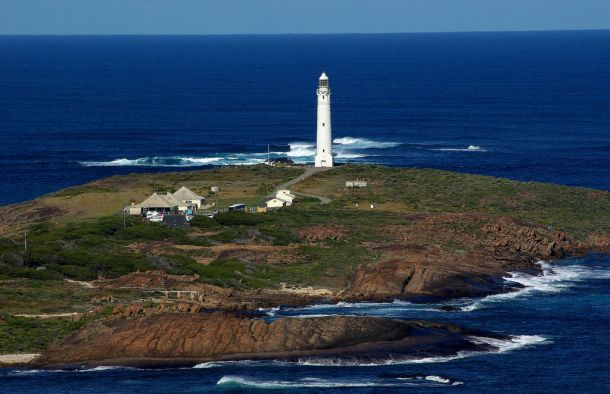 Cape Leeuwin, the south-western point of mainland Australia, is one of the three great southern capes, along with Cape Horn at the tip of South America and the Cape of Good Hope in Africa.

For cruisers attempting to circumnavigate Australia, however, it has long been a point of consternation. It's the place where the Southern and Indian Oceans meet and is famous for its strong westerly winds and huge swells, as well as for shifting sand banks and numerous hidden reefs. Most cruisers give it a wide berth, passing well out to sea under the watchful gaze of the Leeuwin lighthouse.

Until now, the major problem for cruisers has been the lack of a safe overnight anchorage when sailing between Cape Naturaliste, which guards Geographe Bay and the towns of Busselton and Dunsborough, and Albany on the south coast. On one of my two passages around Cape Leeuwin we anchored overnight at Hamelin Bay, which is midway between Augusta and Margaret River, but that is a fair weather haven and is exposed to north-westerlies, in particular.

Now, however, thanks to the Western Australian Royalties for Regions program, cruisers have a safe haven at the new $36.47 million Augusta boat harbour. The new facility was officially opened in November 2014 after almost three years of construction, including the creation of 600 metre and 150 metre breakwaters using 500,000 tonnes of granite from the onsite quarry and 40,000 cubic metres of imported sand fill.

The harbour features 2.8 hectares of sheltered water and 5 hectares of land for service facilities including:

It will also serve as a regional base for sea search and rescue operations, supported by the Augusta airstrip.

About 28 of the available 40 pens have been allocated on an annual hiring basis. There are currently a number of pens available for casual hiring by visiting vessels. DoT has a state-wide overnight berthing charge for recreational vessels of $50 (GST included) per vessel. Different rates apply for longer term stays and charges by pen length. Penholders have their own toilet and shower facilities but no laundromat.

According to a spokesperson for the Department of Transport, which manages the harbour, prior bookings should be made to ensure a pen vacancy is available. Enquiries regarding berthing applications and associated fees and charges at the harbour can be directed to the Department of Transport’s (DoT) Bunbury regional office on (08) 9792 6607 or email regional.servicessouthwest@transport.wa.gov.au

The spokesperson added that there are currently no shops within the harbour, however DoT is in the final stages of issuing a licence for a mobile food van. DoT is also currently negotiating with a successful applicant for the provision of fuelling services.

“While it is the responsibility of the skipper to determine the appropriate route, DoT has compiled detailed information on the boating and marine facilities in Augusta which is available in the Boating Guide to Augusta Margaret River  on DoT’s website. It is also recommended that people consult the DoT website for information regarding data for local sea conditions and tides.

“Please note local knowledge is essential at the ocean entrance of the Blackwood River, as there is a sand bar with frequently changing water depths,” DoT concludes.

This harbour will make a big difference to cruisers in the southern part of WA, which is a superb cruising ground. Esperance and Albany on the south coast are both excellent towns to visit. The Recherche Archipelago, which is accessed from Esperance, is the equal of any cruising area in the world with its pure white sands, deep indigo blue water and the friendly reception that can be guaranteed from the locals.

With the opening of the Albany harbour, it is now a much easier sail from either of those towns to Geographe Bay and Fremantle, or vice versa.