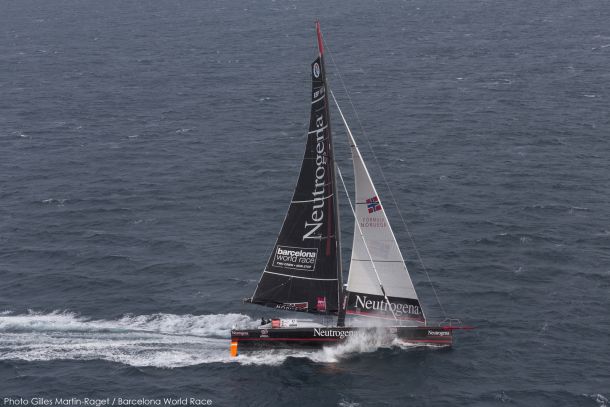 After a pit-stop in Bluff, in the very south of New Zealand, which according to skipper Guillermo Altadill would have done an F1 motor racing team proud, Neutrogena is back on the Barcelona World Race course this Saturday afternoon but only making moderate speeds as Altadill and Jose Munoz try to plunge southwards with maximum speed to find the first east-bound low pressure system.

An inconveniently positioned high pressure system means that for the moment Neutrogena has not so much roared out of the pit stop in a cloud of burning rubber at 0530hrs UTC this morning as headed south at a fast clip. But the two very highly motivated skippers on board the boat which is back primed to 100 are fully rested and fired up ready to fight for maximum speed over each and every mile to the finish. The duo expected to be into stronger, favourable breezes by tomorrow.

The seven times circumnavigator pledged that he will not look at the rankings and torture himself over coming days. He plans to ignore as best as possible the fact that race leaders Cheminées Poujoulat have now escaped to be 936 miles ahead, nor indeed today's news that Bernard Stamm and Jean Le Cam are still hobbled by only light breezes themselves. Both first and second placed crews were making just 9.6kts this Saturday afternoon.

Altadill, in good humour and appreaciative of hi s shore team's coordintated quick efforts said, “I will not worry, I dont want to look at the reports of the other boats. I know Cheminées is quite far in front. The boats behind were 1200 miles behind and probably they will be ahead of us, we don't know. I dont want to know. For the next week I will not check any position reports. I will just concentrate on our boat.”

The Spanish skipper explained the engine problem which forced Neutrogena in to New Zealand was a chain of problems linked to water being taken into the engine and various electrical shorts. But the shore team made a thorough inspection of the boat, made excellent use of the mandatory minimum 24hrs, and – according to Altadill – found a few other lurking problems which were sorted which could otherwise have proven expensive.

Neutrogena still has 430 miles in hand over third placed Anna Corbella and Gerard Marín who in turn are 312 miles ahead of Renault Captur. The Spanish pair have earned another dozen miles on the pursuing fourth placed Jorg Riechers and Sébastien Audigane.

Bruno and Willy Garcia on We Are Water have been negotiating a powerful storm north working SE along the exclusion line. The brothers are now at the “Australian toboggan run” where the Antarctic Exclusion zone slants SE and so they will likely escape the worst of the low. “The option is not faster but safer,” said Bruno Garcia today. Tomorrow should be quieter for the Barcelona brothers.

Strong W'ly winds allow both One Planet, One Ocean & Pharmaton and Spirit of Hungary to profit nicely. Although they are separated by over 700 miles they are on the same weather system and both averaged 13kts today. Aleix Gelabert and Didac Costa were within 400 miles of Cape Leeuwin at 1400hrs this Saturday afternoon.

Guillermo Altadill (ESP) Neutorgena: “The main engine runs the alternators which charge the batteries and we had a problem with the main engine which we could not start. We had our engineers there and they found water inside the engine for some reason. When we tried to start it many times then the pump was sucking water and then it started shorting out in a few places, so there was a chain of problems, but the main engine was not working. So we could not charge our batteries.

“The shore team did an excellent job. In 24 hours they did all these jobs and put everything together, they got the parts and cleaned everything, and they did other things like the mast and sails. We loaded more food. Basically we did a mini refit in 24 hours, the guys did a great job to have us ready at the right time. So a big thanks to them. We have the boat at 100 per cent so we can keep pushing, keep going, keep fighting for the next 12,000 miles.

“We spent a few hours with the team going over a few things we needed to change and to check, then we got a dinner which was good. We had fresh food which was great after 40 days with no fresh food, and as well we slept in a dry bed. We took a shower this morning. That was a luxury for us. We woke up this morning really fresh, and in the last 24 hours we slept more than in the last 10 days. So now we are full on. Now the batteries are charged, not only the boat batteries but our own batteries, we are ready to keep racing.

“Our plan is to get to the south and catch the first front, to go as fast as possible to recoup the miles and the one important thing is not to worry about the other boats, the strong ones or the ones in the back, we don't worry, we are ready to just push for the next 12,000 miles. So we found a few problems. We are sorted. We are very confident with the boat. We have made a positive from the pitstop. You lose miles but we checked the boat and so we keep sailing, we try to get to Cape Horn as fast as possible. I will not worry, I dont want to look at the reports of the other boats. I know Cheminées is quite far in front. The boats behind were 1200 miles behind and probably they will be ahead of us, we don't know I dont want to know. For the next week I will not check any position reports. I will just concentrate on our boat.”

“It is not our objective to go south and get big winds and perhaps find risky conditions. We are not looking to gain perhaps 5%. So we want to avoid very, very difficult conditions to go sailing in, but if we are in the 50s, OK we will be there and it will be nice to tell our children that we were in the 50s once.

“We Are Happy with what we have done but we dont feel like we have done nearly 50%. We still some immediate objectives, like crossing this depression. But the next objective is really getting into the Pacific.”