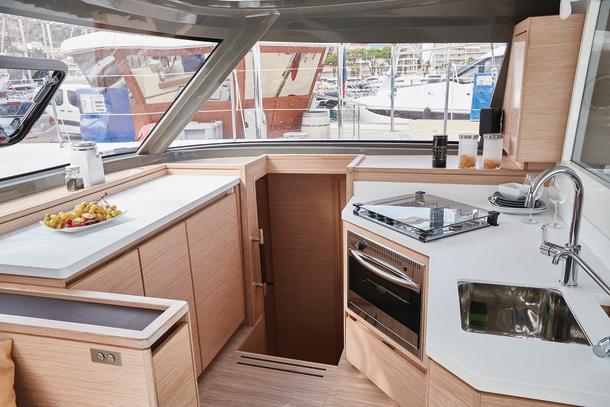 We tested the original Nautitech Open 40 back in August of 2016; shortly after Bavaria Yachts bought the multihull boatbuilder and shortly before that company went into administration.

When a venture capitalist management company took over Bavaria one of the first announcements they made was to state that the Nautitech factory would continue as is. Such was the strength of the brand and the length of the order book.

Since then, of course, the Bavaria monohull name is also back in the market, as strong as ever.

So, in those ensuing three years, has much changed with this specific yacht in review? At that time, I mentioned this was one of my favourite yachts tested for 2016. Have they improved on that position?

All the best bits have been retained in this latest iteration of the Open 40, which makes sense. Most of the specifications should remain the same when you have a good template to begin with.

Side on you would think not much has changed from the last version: high freeboard intersected with a sharp chine, offset by the sloping aft sides and the low, stylish cabin top.

On the specs I was given I did note that the new version is a little heavier, but only by four per cent. Not enough to affect its base speed but maybe enough to add a little extra luxury perhaps? Other noticeable but minor changes is a thinner overall beam but wider hulls in the latest version, which may account for the heavier weight.

All the same advantages of a catamaran are evident: large open back deck with a hard-cover bimini; big table set to starboard with bench seating; bench seating mirrored on the port side; aft bench includes seating as well; wide opening between the indoor saloon and the outdoor; plenty of shelving without having to worry about tipping; and so on.

The galley has been reconfigured so the sink and a bottle rack are closest to the cabin entrance. The dinette/lounge is also bigger and can form a day-lounge.

Other minor changes include larger hull windows, a slight reconfiguration of the galley with the sink and a bottle rack closer to the back deck action; plus the dinette/lounge is bigger to form a day lounge.

Also repeated is the outboard steering postions set well aft on the hulls. Back in 2016 I found these a nice reminder of my monohull preferences. Many multihull sailors are not enamored with the position, preferring the usual position of along the cabin wall or above the back deck bimini in a separate bridge deck.

Our test version had a steering station bimini that nicely covered the helm area without hampering any view. It is also removable if the steerer prefers. Being well outboard on the hulls it makes it easy to see all the sails and the telltales while getting the breeze on your face and making you feel part of the sailing experience.

The other advantage in having these stations well aft, people can move around the back deck easily and access the foredeck by stepping up between the helm station and the back deck. More space on the back deck without the steerer losing touch with the conversations.

Design-wise it is difficult to see much difference between the previous iteration and the latest design, certainly not without proper specifications. It can be seen that this is a slippery little yacht.

We took her sailing in around 15 knots to 20 knots in Sydney Harbour and had a marvellous sail at speed. We could pinch it up to 40 degrees apparent when the breeze was over the 15kn, but why would you?

Drop it down to 45° and the cat leaps out of the blocks doing over eight knots sailing a much better course upwind.

The reason is probably the use of its Solent rig with the self-tacker for tight upwind angles. Useful also in wider apparent wind angles in high wind speeds when a spinnaker or even the gennaker may be a handful.

Doing the off-the-boat photography our tender had a bit of a challenge keeping up with her when she rolled the asymmetrical genny out and headed up Sydney Harbour. The high aspect ratio rig, standing as tall as many longer catamarans, works well. A lot of sail area in the forward sails is easy to handle on the roller furlers.

Standard sails are both Dacron, with the fully-battened angle-top mainsail having two reefs and a lazy jack bag. The rig itself is a standard twin spreader with double diamond rigging.

All the running rigging leads back to the two steering stations with suitable Harken self-tailing winches to do the duty.

On the bimini Bavaria have installed a deep handhold around the edge of the hardtop, which doubles as a water catching trench during downpours to fill the water tanks. A simple idea.

As with most yachts nowadays, everything is about the ease of use. As mentioned the line controls are within reach of both steerer or crew.

The bimini hardtop is strong enough to take two people’s weight to control the mainsail. In fact the boom is low enough to allow a person to reach across the boom to the other side if need be, which it often is.

The side decks are wide and the forward trampoline a safe haven.

The twin Volvo 15 kilowatt (20 horsepower) engines sit behind the steerer and have plenty of room for access plus include storage of any necessary tools.

Our test yacht had upgraded its engines to 40hp, which will push her up to ten knots in flat water. Both engines feed off from dedicated 215 litre fuel tanks.

As with most multihulls there is a distinct advantage in having the engines so far aft, noise in the main cabin, plus even on the back deck as well, is minimal.

The semi-keels sit underneath hulls that are full fibreglass below the waterline; careening this baby up a handy beach at low tide should be no problem. The rest of the hulls and deck are manufactured using Bavaria’s patented ‘VacuTec’ system of a foam core sandwich panel via vacuum infusion.

This reduces the weight of previous hulls by 20 per cent, making them lighter while increasing strength; along with effective protection against osmosis by the use of isophthalic resins.

There are, of course, different package options available according to the type of sailing the new owner prefers including the addition of window covers, solar panels on davits, drop down cockpit table, washing machine, spreader lights and more.

Access to tanks, wiring and seacocks is within easy reach of any body size as it usually is with most multihulls. Hoses are double clamped to the through-hulls.

To head to the sugar scoop transoms, the passageway may not be as wide due to the outboard steering stations but the platform area is not similarly restricted, plenty of space for all to enjoy the access to the water.

Since the emphasis for use of this yacht is to be outdoors, it stands to reason that the indoor table setting is not as large as the outdoor. In fact the entire length of the indoor area is probably half of the outdoor. But, with a solid overhead bimini and the ability to completely enclose the outdoor with canvas and clears, these dimensions are irrelevant. Add to this the wide opening of the doors between the two spaces it would be seen and used as one space in any weather.

The indoor seating is really a day relaxing area, maybe using the small dropable table to check the charts or to cuddle up and watch the television that can be added to the bench on the starboard side. The dropable table extends the cushioning into a cosy U-shape.

The galley takes up the rest of the starboard side splitting across the stairs down to the hull accommodation. Here there is plenty of bench space, cupboards and pull-out drawers. To a monohull sailor the image of the galley screams ‘danger!’ But, really, on a multihull the chances of being thrown off balance and down the stairs is unlikely.

That aside, the interior panel work compliments the lightness of the area with a light-toned oak over a foam core. Cabin doors are solid wood, cutting down on exterior noise.

Our test yacht had the three cabin version. The port side hull is the master suite and it has a pull across door at the base of the steps for privacy.

Mid hull on the port side has a large office desk with a seat. The desk has recessed leather panels on top to stop your Mont Blanc pens rolling onto the floor.

In the bow section is the head/shower set up. Even though the shower is furthest forward this is a huge area thanks to the hull chine design of Marc Lombard to overcome the thin, performance-enhancing hulls. The shower head is huge and the floor could easily hold two people.

The master suite bedroom is also huge, but it is here where the only disadvantage to outboard steering stations rears. Rear facing windows have become de rigeur for aft cabins nowadays but, due to the outboard position of the steering station on the Nautitech this window is restricted. There is still plenty of natural light in the cabin from the almost full-length hull window and overhead hatch.

By the way, neatly tucked away in the master hull head cabin was a Daewoo mini laundry machine. These little beauties will take a two kilogram load without taking up much weight.

The starboard hull, coming off the galley, holds a double bed cabin both fore and aft with a communal head midway. The beds are huge but the head and shower are tight albeit reasonable.

All beds and the rooms were comfortable places to hide away from the crowd, with plenty of storage options all around.

Which probably sums up this latest version of the Nautitech 40. The emphasis is definitely on safe, comfortable sailing on the aft open deck, but that leaves plenty of space down below to live your own life onboard. ≈