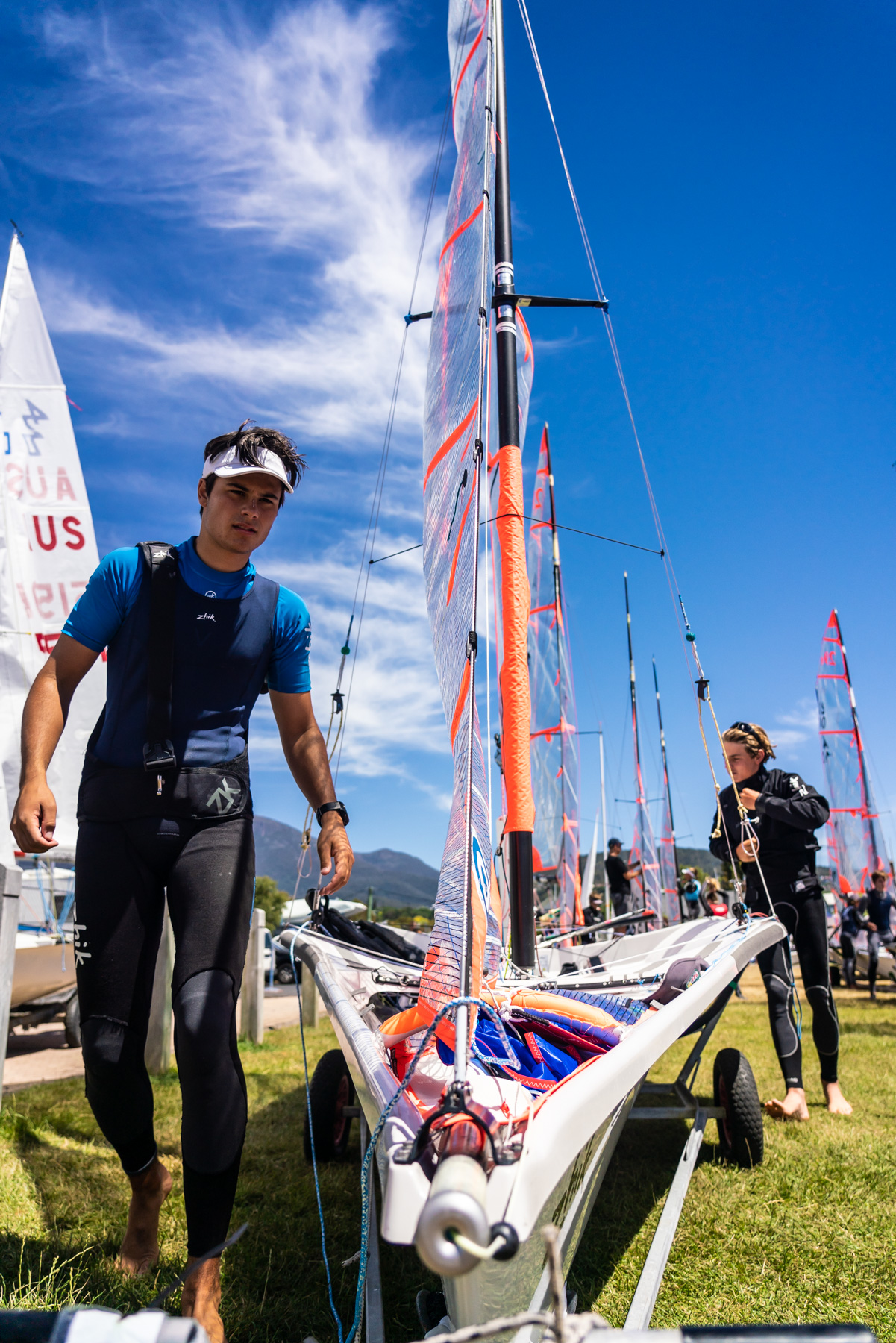 Young gun Zac Littlewood may have conquered a world championship, but there was one title missing from the cabinet – and he provisionally wrapped it up on the penultimate day of racing at the 2019 Australian Youth Championships, presented by the Australian Maritime College today.

Zac has an 18 point lead in the Laser Radial class with one day left to sail on the Derwent River, and was elated to have one hand on the title that had eluded him, despite being the current Laser Radial world champion.

“I got the Youth spot last year (Youth World Championships), but finished fourth at the Youth Nationals. It’s a great step. I’m also looking forward to going back to the Youth Worlds in Poland this year and hope to tussle it out with the top guys again.”

The Youth Australians are the second and final qualifying event for youth sailors to represent Australia at the Youth Worlds n Gdynia, Poland in July.

In the Girl’s division, Paige Caldecoat has overcome sickness to have an almost unassailable lead in the Laser Radials. She was able to find the right side when it mattered and now sits ninth overall in the class.

“I did say in my game plan that I wanted to keep an eye on the tide, and I did and it worked and that’s always nice” she said at the end of the day’s racing.

In the 420 class, Victorian twins Lily and Matilda Richardson look likely to add the Girl’s National Youth title to the National title they won at the same venue last week.

After being the first Girl’s crew home in each of the three races today Matilda said, “It was a little bit tricky, we just tried to lengthen the gap between us and the next girls to take the pressure off for tomorrow.”

It was a perfect day on the water for the 29er team of Archie Cropley and Max Paul from Middle Harbour Sailing Club, with their three bullets putting them in an unbeatable position coming in to the last day of racing.

A national title has been a long-held dream for Paul, who said “It was a pretty good day, pretty surreal that we wrapped it up with a day to go. I’ve been working a long time for this; it’s my fifth youth nationals.”

The team is coached by five-time Australian Olympic Head Coach and Australian sailing legend, Mike Fletcher. The two have been the form team of the season after also winning the Australian title last week.

In the Girl’s 29er fleet, local team of Alice Buchanan/Dervla Duggan from the Sandy Bay Sailing Club have continued their hot form and look set to be take the top step of the podium tomorrow. They hold a 39 point lead over the next Girl’s crew and sit 12th in the Open division.

It is going to be a huge last day in the Nacra 15 class, with just a couple of points separating the top teams. The major contenders are Georgia Payne/Kai Colman from South of Perth Yacht Club who are 3 points ahead of Will Cooley/Bec Hancock, with another 6 points to Ashley Swadling and Nathan Bryant.

Racing will conclude tomorrow, with a new set of National Champions to be crowned. The teams to represent Australia at the World Youth Championships will also be announced at the presentation dinner hosted by the Royal Yacht Club of Tasmania.

Follow all the Youth Championship action online at www.sailingyouth.org.au