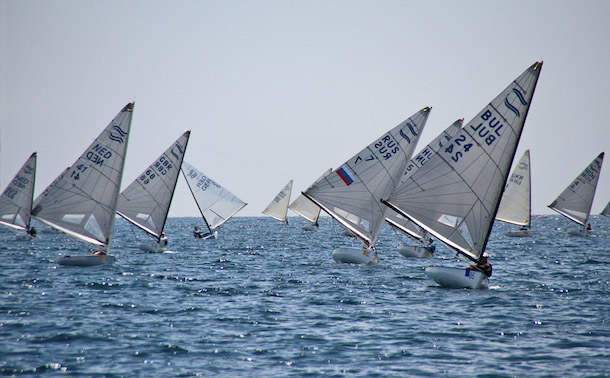 Twelve years on from his last major Finn regatta Martijn van Muyden (NED) has taken a narrow lead at the Finn World Masters in Kavala, Greece from Yuri Tokovoi (UKR) and Vladimir Krutskikh (RUS). However, the story of the day was 70 year old Henry Sprague (USA) winning the first race to give him a clear lead in the Legend fleet at the half way stage of the regatta. Other race wins went to Thierry Van Vierssen (NED), Dmitry Petrov (RUS) and Laurent Hay (FRA).

After a two hour delay to wait for the sea breeze to fill in, two more races were sailed in a building breeze that topped out at about 10-14 knots in the second race, while in the first it remained light and patchy. The second race produced simply superb sailing conditions with great waves for the downwind legs so everyone had a great time, wherever they were in the fleet. It doesn't get much better for Finn sailors than surfing downwind in  nice waves, a solid breeze, 28 degrees and brilliant sunshine.

In Yellow group, the first race produced some high scores for some of the front runners, with some new faces at the front. Jake Gunther (AUS) led at the top from the Legend that is Henry Sprague (USA). Sprague took the lead on the second upwind to win from Dmitry Petrov (RUS) and Mihail Kopanov (BUL). Petrov went one better in the second race to pass the initial race leader Marc Allain des Beauvais (FRA). Walter Riosa (ITA) crossed in third.

In the blue group there were also two winners. Thierry Van Vierssen (NED) led all the way in the first race of the day to win from Andre Budzien (GER) and Martijn van Muyden (NED). In the second race Laurent Hay (FRA) rounded the top mark in fourth, before moving into the lead downwind for the race win from Paul McKenzie (AUS) and Yuri Tokovoi (UKR).

With four races now completed, the championship is valid, but one more is needed to be able to hold the medal race on Friday. Forecasts for the rest of the week show further challenging light wind conditions, though everyone here wants more of what we had today. Only two points separate the top four boats.

Overall leader van Muyden was one of the world's best Finn sailors a decade ago but hasn't sailed a major regatta since 2003. He said, “It's all pretty close so far. I think the Finn Masters is really nice. The competition is great. For me I initially thought that something in the top 10 wold be ideal, but I haven't really sailed that much since I stopped. I didn't really know what to expect especially as there have been some changes in gear and I am still using my old boat and mast, but with a new sail. It is pretty hard here and many people are going really fast so it's a very good competition. Hopefully more of the older guys will join us. Many still have their Finn.”

On his strategy for the racing. “I think here you shouldn't take too much risk. Basically take the beat from the layline and watch the other competitors to decide where to go. Just try to avoid too much risk at the start and on the beat.” It is also his first expedience of free pumping. “Yesterday we had it for one race and today we had none, but I got a yellow flag on the final reach today. There's still four races to go so lots still can happen.”

His countryman van Vierseen said of his race win, “I started about three-quarters of the way down the line. For me it was perfect as I had enough speed to come out of the group and sail free. So I tacked away and led at the first mark. I was lucky to stay in front. Nothing else changed. It was a nice race, good for me.”

“The competition here is excellent. Very professional guys and I know them for quite a long time. I said to the guys this morning that I am so happy to be here for a holiday but I miss the 'fire', what I need to win. And luckily today it went well, but I need to be more aggressive. I am really enjoying it.”

Yellow Group Race 3 winner Sprague, won the Grand Grand Masters last year and is now a Legend (70 years and older). This could be the first time a Legend has won a race at the Masters. He explained his race. “On the third start [after the recalls] I nailed the start and got right into a good position, dropped over and and my boat was really moving well. I didn't worry about the boats around me I just sailed toward the mark on the shifts and I got some really good wind shifts. I got to the top mark in second and held on downwind. There was a really nice guy from Australia [Jake Gunther] in front and and we talked a little bit. I said. “You can get first place, I'd be happy with second.” So we are going up the second beat and at one point we got this big header and I tacked into a big lead and I had him by 10 boatlengths. Then there was a Russian coming up fast behind on the run, but I pulled out and realised I might win this, Then I got really happy.”

“It was so exciting to get the gun. I don't think I have ever got the gun at a Masters worlds before. It was a great moment of joy. And I didn't get it by hitting a corner, but by playing the wind shifts. I sailed a good race.” Sprague is being coached here by Olympic campaigner Björn Allansson (SWE).

Hay said of his win. “It was very tricky because we had a very long line and if you didn't have a good position your race was over. In the first race I made a mistake on the line but in the second race I was fourth at the top, and had good speed on the downwind. The conditions are very tricky because there is a lot of different pressures on the race area and it is very difficult to see.”

The fleet is full of rock stars, but real life rock star Gunther told his side of the story, “I got some nice pressure out of the left and got across the fleet comfortably. I had a conversation with Henry the whole way round When we lined up for the pin he was trying to talk me into going at about 20 seconds. I understood the humour involved.”

“But then I got gobbled up on the second beat as soon as the younger guys with their lightweight sails got some clean air and some room. But it was a good race and a lot of fun and I was able to hold my position most of the way round until the second upwind. The second race was a similar scenario. I started at the pin and waited and crossed across again but it was nice to see Marc dominate that race. It was very lumpy.  A lot of grunt but a lot of fun.”

McKenzie said on his first Finn World Masters experience, “It's much harder than I expected. The standard is pretty high and there are a lot of god guys here. I have only seen one group so far as it didn't change much, but it's a really good level. The conditions are tricky. The second race was great, but the first race was really hard and once you get back a bit, it's hard to get through the fleet. You have to get out to a side and if you do it night not be the right wide. It hasn't always been the same side that is favoured.”

Third overall, Krutskikh, is also sailing his first Masters. “It's not only my first Masters but also my first event for many years. There are lots of good sailors and very difficult conditions. It's not easy for me as a lot of guys have very good body condition and good equipment. Its also very difficult to get a good start and a good first beat. I am happy but I hope tomorrow we have more wind so we have free pumping which is better for me.”

Racing in Kavala continues until Friday with one more race scheduled on Wednesday at 14.00 after the Annual Masters Meeting is held in the morning. You can follow live race by race finishes on the event website each day at: http://www.finnworldmaster.com