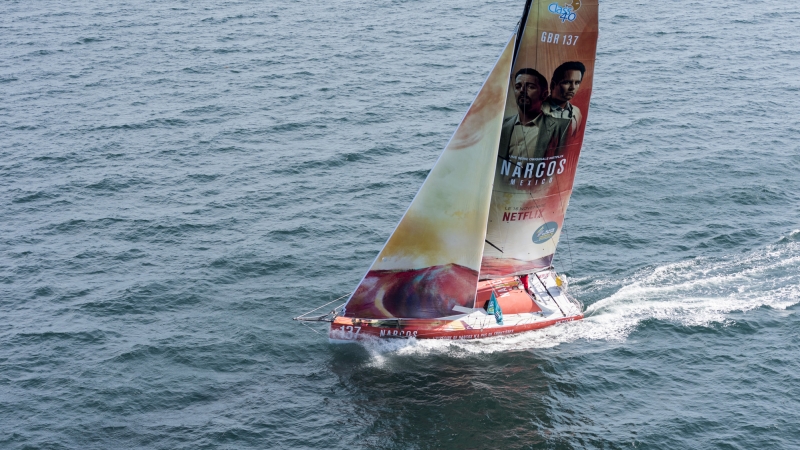 Sam Goodchild on board his Class40

It is not every day that you come across a sporting campaign sponsored by a TV crime drama. But that is exactly the case for British yachtsman Sam Goodchild as he prepares to compete in the eleventh edition of the Route du Rhum-Destination Guadeloupe solo transatlantic race.

One of the favourites in the huge 53-strong Class40 fleet for the 3,542-mile marathon from Saint-Malo in Brittany to Pointe-à-Pitre in Guadeloupe, Goodchild is sponsored by the Netflix mini-series Narcos Mexico which is shortly to be released in France.

The sailor who hails from Falmouth in southwest England but also spends much of his time in Lorient, has the two starring actors in the drama pictured on his mainsail and on his foredeck, plus the tagline: “Narcos Mexico – the Narcos series knows no borders.”

A hilarious post on Facebook features a video shot to promote the campaign with Goodchild sailing along on Narcos Mexico (Peter Harding’s Phor Ty also known this year as All in for the Rhum) accompanied by a ”police” helicopter with the pilot demanding on the radio that Goodchild “identify himself.”

For the Brit whose long-term goal is a Vendée Globe campaign, the Netflix sponsorship came just at the right time when he was thinking of pulling out of the race two months ago because of a shortage of funds. Then he got the call that he had been selected for this most unusual of promotional campaigns.

“It was a phone call when you were trying to figure out which one of your friends is paying a practical joke on you because you don’t believe it,” joked Goodchild, aged 28, who is the second highest British finisher in the modern era in the Solitaire du Figaro (11th in 2013).

“No, it’s incredible considering where I was two months ago,” he added, “and considering that the only TV show I ever watched is Narcos – there’s quite a lot of coincidences coming together at once.”

So what of Goodchild’s chances? Like his fellow British competitor in the class, Phil Sharp, whose boat is a sistership of Narcos Mexico, Goodchild knows he does not have the very latest design and that the newer boats will be more powerful, especially on a reach. But Goodchild is going to give it his best shot on the long road to Point-à-Pitre.

“You have to try and go with the theory of controlling the controllables and unfortunately the boat design element comes in as one of the uncontrallables at this stage,” mused Goodchild.

“But the dream is to win, for sure – that’s the goal. I haven’t really let myself think about what would happen if I won – it’s more about how I can give myself the best chance of winning before the start and then, once I’m racing, what I can do to try and make the least errors.

“To win would be incredible and that’s what I’m aiming to do and we will see where we get to. I’d like to get to Guadeloupe without any regrets and at least feel that I have done the best I could – even if that means finishing 10th or first,” he added.

In the past the Route du Rhum-Destination Guadeloupe has featured a very tough opening section as the fleet sets sail in November into Atlantic depressions and Goodchild is well aware that this year’s race could start with a bumpy ride. “I am preparing myself for that and getting all the storm sails ready because the chances are the first three days, if not more, are going to be pretty full-on,” he explained.

Goodchild is looking forward to this challenge, something that he hopes will be another step towards his dream of winning the Vendée Globe one day, and he already has butterflies in his stomach as he prepares to do battle in the biggest Class40 fleet ever to take the Rhum start.