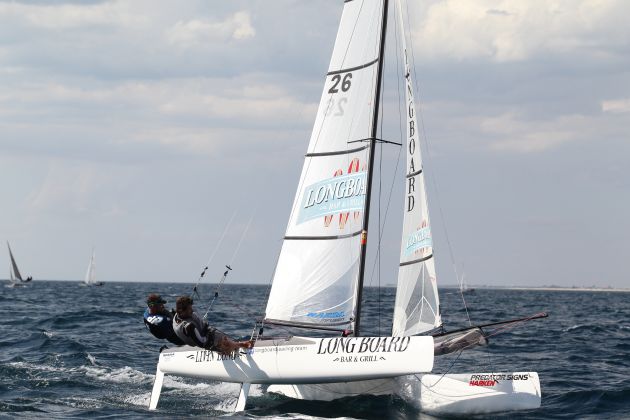 The 38th Nacra nationals were held at the Adelaide sailing club over the new year. Thirteen races were held ranging from 5 knots to 25 knots with large seas. The race committee did a magnificent job to get 13 races in with the first day losing three races due to a lack of breeze.

Three classes competed in the event.

Michael Guinea managed to win the title but was forced to sail all races and had some very nervous moments when in the first race while leading missed a clearing mark and was scored DNF. In the 8th race they had some minor gear failure and scored another DNF .

The local South Australian boats showed some great speed through the week with three boats managing to score a first place.

Racing was extremely close with six different heat winners over the series, most race finishes were only seconds apart.

Was won by Bundaberg crew of Matthew Caldwell and Bruce Potter this is their third year in a row of winning this title. They showed extreme speed in the windier races winning some races by minutes.

Another Bundaberg sailor finished 2nd overall Brad Knoning who had some very close racing with Warren Guinea. Warren was leading the last race until he went around the OK dinghy mark not the Nacra mark which gave Brad 2nd place.

Was won by Ross Guinea ahead of Nick Hiller who had a chance to win going into the last race.

Ross managed to fight of Nick to claim the title.

The Nacra 430 class has been growing rapidly with over 34 boats sold in Australia.

Results can be found at  http://www.topyacht.net.au/results/adelaidesc/2015/events/nacranats/index.htm

Next year’s nationals are to be held at Lake Cootharaba Sailing Club on the Noosa River, Sunshine Coast Queensland.

A large fleet of over 75 boats are expected.