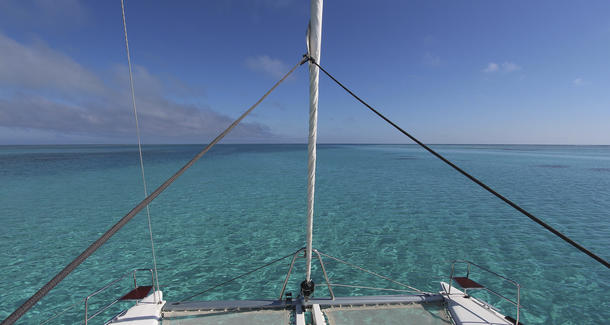 For many cruisers (your author included) one of the most appealing images of the cruising lifestyle is sitting at anchor in some very beautiful and secluded spot, surrounded by nothing but sea and scenery. For those cruisers (again including your author), a reef anchorage is up there with the stuff of dreams.

Fortunately for cruisers in Australian waters, reef anchorages are both available and the world’s best.

Let us step back a moment to be clear on what we mean by a ‘reef anchorage’.

Any feature lying beneath the surface of the water may be called a reef. Hence, there are man-made reefs placed to improve fishing or diving and abiotic reefs formed with non-living components such as sand bars or wave eroded rocks. For our purposes here, however, we will focus on the largest and most widely distributed type of reefs, viz. tropical coral reefs formed by the combined efforts of coral polyps and calcareous algae.

Coral reefs are then further described depending on how the reef is situated to nearby land: a fringing reef is contiguous to an island; a barrier reef creates a lagoon between the reef and the shore; an atoll is a ring reef with no land present.

Coral reefs are one of the oldest ecosystems on Earth. Although coral reefs cover only 0.2 per cent of the total area of the oceans, they provide habitat for at least 25% of all marine animals.

Many scientists suggest that only humans can alter the surface of our planet, more than the tiny polyps that create coral reefs.

Thus we cruisers need to take great care to ensure that we do nothing to harm these magnificent creatures.

Our idyllic reef anchorage is therefore within or near a coral reef and most of our readers are blessed with the Great Barrier Reef (GBR) nearby for seeking such anchorages. The GBR is enclosed within the Great Barrier Reef Marine Park (GBRMP) which stretches 3000 kilometres roughly parallel to the north east Australian coast, at 65 to 250km in width.

The GBR itself ranges between 15 to 150km off the coast and is considered one of the seven wonders of the natural world. The only living thing on Earth that can be seen from outer space.
Some notable features describing both the spectacular beauty and the incredible biodiversity within the GBRMP would include: it covers 344,400km², it is larger than the UK, Switzerland and Holland combined; it is the world’s largest coral reef ecosystem; there are more than 1000 islands including 300 coral cays; over 1500 species of tropical fish; over 200 types of birds; all included in approximately 3000 coral reefs!
With the GBR being so vast, we hasten to admit that our reef anchorage experience probably amounts to no more than one toe on the GBRMP doorstep. With that admission out of the way though, we can say confidently that CatNirvana’s reef anchorages were among her best ever and we are happy to share those experiences with our readers here.

CatNirvana’s log records our experiences while anchored within the surrounding reef off Lady Musgrave Island; on Fitzroy Reef and on Hardy Reef. Before we turn to each of those beautiful spots, we should begin with a few general observations about anchoring on a reef.

To ensure you enjoy your reef anchoring as much as possible, you should be very focussed on the weather before you embark toward the reef. Reef anchoring is almost by definition very exposed.

While Lady Musgrave Island provides some theoretical shelter, the island is small and there is no practical shelter. In each of Fitzroy and Hardy Reefs, there is no land shelter at all.

It is therefore suggested that reef anchoring should be avoided in winds over 20 knots. It is particularly important to keep sea state in mind and avoid any sort of sustained strong weather from one direction where the swell will be large and create uncomfortable, if not dangerous, conditions inside the reef.

It is easy to find reports of vessels dragging in reef anchorages, but happily we cannot add to those reports. We were fortunate to experience near flat-calm and truly spectacular conditions on both Lady Musgrave and Hardy Reefs, but less so on Fitzroy where we found ourselves in clear but windy conditions.

There was no large swell around Fitzroy so it was still enjoyable, but it was not good for snorkelling as the sea surface was just too choppy.

Having arrived at a reef, the uppermost priorities should be safety of your vessel and crew of course as well as protection of that beautiful environment.

The most immediate safety concern as well as the concern to not damage the reef will be the reef entrance. In this area, Hardy Reef stands out, albeit in a negative way.

Both Lady Musgrave and Fitzroy presented well-marked entrance channels for CatNirvana. Even though we were a bit concerned about the width of those channels with our 7.7 metre beam, both entrances provided no problems. The general rule is to enter a reef on a flood tide, ideally early to mid-tide, with the sun overhead. Our experience following that general rule confirms it will markedly reduce stress on both captain and crew.

Hardy Reef distinguishes itself by the entrance being completed unmarked, not at all clear to the eye and with very little margin for errors. It is, therefore, a particularly strong case for following the general rule!

For our readers keen to test themselves and attempt entry into Hardy Reef, a copy of Lucas’ ‘Cruising the Coral Coast’ (or some similar detailed cruising guide covering the area) should be studied for useful notes on the approach. CatNirvana’s log recorded the Hardy Reef entry at 19°43’.823S 149°11’.176E.

Once inside the reef, you will be looking for a suitable spot to anchor. Now your priority needs to be fully focussed on not damaging that beautiful environment.

With the sun overhead, following the general rule of entry of course, you should be able to clearly see and avoid the coral bommies common to every reef anchorage. There will also be specific areas either designated for anchoring or specially marked ‘no anchoring’. These GBRMP rules are to protect this very special environment.

When you locate a suitable anchorage area, allowing for swing, you should pay out generous scope reflecting the very exposed position. Our experience in all of Lady Musgrave, Fitzroy and Hardy reefs was that there was good holding sand available.

Relaxing on anchor inside the reef, your eye will be drawn to the horizon. Fitzroy distinguishes itself as being completely out of sight of land. It is indeed an awesome sensation to feel your vessel swinging to an anchor with nothing but sea to the horizon all around!

At Hardy Reef you will see Hook Island low on the western horizon. But civilisation is much closer in the form of Reef World, the large and semi-permanent community of platforms and numerous vessels situated in the deep channel between Hardy and Hook reefs.

Anchoring at Lady Musgrave the island is close at hand and clearly visible.

Even at Hardy and Lady Musgrave, however, the hard objects seem small as compared to the vast open water.

Here are a few specific notes on each of CatNirvana’s reef anchorages.

Situated 52nm north of Bundaberg and 32nm north-east from the nearest mainland facilities at the town of 1770, Lady Musgrave Island is a 13 hectare coral cay with 2930ha surrounding reef.

Heading north, the island is the second in the GBR island chain, the first is Lady Elliot 22nm to the southeast, it is intensively used. Anchored inside the reef, Lady Musgrave is a beautiful spot with spectacular and immediate diving and snorkelling opportunities as well as the attractions of fascinating bird and turtle life on the island.

Perhaps the biggest negative feature would be the heavy and constant/daily tourist traffic visiting from 1770. When CatNirvana anchored there we found one of the smaller tourist vessels. It appeared to be a glass bottom boat taking around the visitors who came out to the island in the large power catamaran, it was particularly and offensively loud for long periods during the middle of the day … every day.

We would urge any cruisers visiting Lady Musgrave to anchor well away from the island, there is plenty of room to do so, in which case Lady Musgrave will be an enjoyable reef anchorage.

Situated 37nm north-east from 1770, Fitroy Reef is a spectacular 3650ha drying, closed-ring reef with a large, deep (6 to 10m) lagoon and a well-marked entry.

Out of sight of land and with little in the way of visiting traffic other than a few cruisers, this would be our Captain’s pick for the best get-away-from-it-all reef anchorage.

The GBRMP information suggests there are “20 tourism operators … to Fitzroy Reef”, but we either did not see them or they were of the live-aboard variety and thus appeared as just another yacht. There were only two other yachts on the reef during our visit, albeit mere specks a long way away in the vast, open water inside the reef.

With a windy stay during our visit preventing us from snorkelling, we were unable to explore what the GBRMP describes as an area rich with sea life and very well suited to snorkelling. We will definitely be looking for an opportunity to return to Fitzroy with a better weather window.

Scientists suggest Hardy Reef has reached its full height and is now expanding outward which means (and this is very clear to any visitors) there is a sheer wall along the reef’s outer edge which drops virtually vertically down to the sea floor up to 60m below.

Within Hardy Reef are many of the smaller reef formations often seen in the spectacular aerial reef images, e.g. the iconic Heart Reef. Many of these formations are, however, in designated ‘no anchoring’ zones.

As already noted, the entry to Hardy Reef is difficult, very likely dangerous in poor conditions. The large tourist community nearby, Reef World, is busy but not really close to the anchorage area such that it is not overly troublesome. We were visited one evening by a group of pleasant young fellows working at Reef World and enjoying a dive in their free time.

Apart from Reef World, CatNirvana enjoyed Hardy Reef all to herself. A fact, no doubt, reflecting our heart palpitations as we entered the reef and the understandable reluctance of other vessel’s skippers and crews to put themselves through the same raised blood pressure!

Reef anchorages are not for everyone. However, for all those like the Captain and Admiral on CatNirvana in pursuit of beauty and solitude, a reef anchorage on a fine calm day is hard to beat.