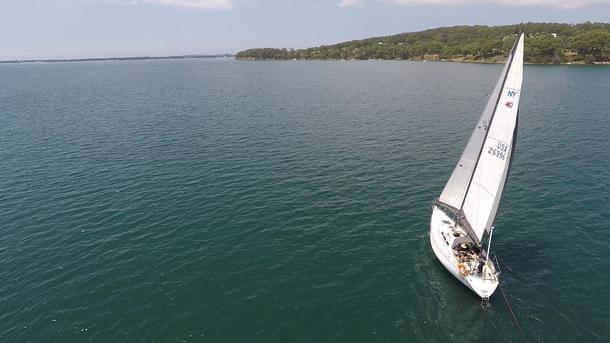 How do you know when it’s time to upgrade? We struggled with that question ever since we bought our first boat, Serenity.

Reece was constantly looking at what boats were for sale, even on the day we got the keys for Serenity. For six months I had to listen to “check out this one” or “I found us the boat”.

But, finally, a boat actually caught my attention as well as his. In my view, its main appeal was its size, combined with being a limited edition: one of only 21 made.

When we had looked at boats in the past, certain boats had stood out based on the name, sparking something familiar which made it seem fated that we should own it. However, our new boat did not fall into this category; Daybreak is not exactly the most appealing name I can think of for a boat; a little generic and boring, if I am honest.

Barnaby is a 40 foot New York design, built in 1979 and spent most of its life in Lake Michigan, a large freshwater lake in the United States. Designed by Doug Peterson for New York Yacht Club members as an offshore one-design class between 1977 to 1979, the original owner’s grandson bought it five years ago, had it boxed up and shipped to Australia.

Every time someone hears the name Barnaby, they ask us if it has any correlation to Barnaby Joyce. For a while we just laughed it off, but after a while we figured, why not play along? We have now dubbed our tender Joyce.

After seeing the listing online, we arranged with our broker to go and check it out. It was a strange moment making our way towards her in the tender, it was love at first sight. I had felt the same way just looking at the photos online, but now actually seeing her in person, I imagined it was the same feeling a mother gets looking at their new baby for the first time.

Her exterior was immaculate, so streamlined and beautiful and the interior had such great potential that I turned to Reece and said, “this is our boat. Let’s buy it.”

As with any boat we have had, we had some work to do to get Barnaby up to live-aboard standards. Fortunately, the boat was dry-docked and the whole exterior was repainted only a few months before we bought her due to an insurance job when she got hit by another boat.

This meant that she also got surveyed and antifouled at the same time. The fantastic news was that because of this we did not need to get her surveyed again in order to buy her. Reece rang the surveyor and the boatyard to pick their brains about any issues and there was nothing we didn’t already know about.

We took her for a test sail in winds gusting 15 knots to 20 knots and she did not even hesitate. We only had the mainsail up and she got up to 5kn to 6kn. The heeling was a lot less severe than in our first boat, a 27″ Columbia.

The Columbia was a great boat to learn to sail on, but we decided an upgrade was necessary to do some more serious sailing. We wanted to sail not just around Lake Macquarie our home port, but sail north to the Whitsundays and south to Tasmania and round to Western Australia.

We realised how much easier the trip would be in a bigger boat, especially if we want to take anyone with us or get away from the coast and head for Lord Howe Island.

Being an ex-racing yacht, Barnaby draws 2.4 metres but, because she sits so heavy in the water, she sails just beautifully.

The most important things we needed to do in order to be able to live aboard were replacing the electronics and the gimbal oven. The rest is largely cosmetic: a new spray dodger, bimini and new upholstery throughout.

We did discover some water damage, unfortunately. The bilge pump under the bathroom floor had stopped working quite some time ago and a large section of floor from the bathroom to the V-berth was left irreparably damaged; to the point where Reece put his knee through it. So we ripped it out and replaced it.

The biggest change to the interior we made was to replace the vinyl ceiling with white aluminium composite panel. This simple update has changed the whole feel of the boat’s interior. No longer is it dingy and old, but light and bright, especially since Reece added LED strip lighting to either side of the galley.

When we had to replace the damaged floor we did so with 18 millimetre marine ply and topped it off in adhesive vinyl planks with a whitewashed wood look. Combined with the new ceiling it has made such a big difference to the interior, we are so happy with how it turned out.

Our biggest issue, to date, was a dodgy shaft seal on the prop, which was supposed to drip water once per minute only when the engine is running. But instead, it dripped constantly.

This was causing headaches because Reece had to pump out the water by hand, which at times was as much as 60 litres. Fortunately, our bilge is fairly large so we were never in danger of sinking. But, as I said, it was very annoying.

Needless to say, we got it fixed as soon as we could but that led to us discovering another problem: the skeg needed to be replaced. Under motor, it vibrated so badly.

It seemed to have been an issue for a while because someone had made a temporary ‘fix’ by using what looked like poly pipe and shoving it into the skeg around the prop shaft to act like a sleeve. However, the skeg had corroded and now needed to be fixed properly. Wow, was that expensive!

Like a lot of younger sailors, we started blogging our repairs and adventures on YouTube, finding inspiration from channels like SVDelos and SailingLaVagabonde. Unfortunately, we are not the only ones who thought it was a great idea because YouTube has been inundated with sailing vlogs over the past two years. Due to the influx, it has made it a bit difficult to stand out from the crowd.

We noticed, however, that most of the channels available explore the same locations: either the Caribbean or South Pacific. This is largely due to the majority of them being American.

But we intend to sail around this enormous beautiful and dangerous island of ours first and experience all of its natural wonders and document it for all to enjoy. ≈