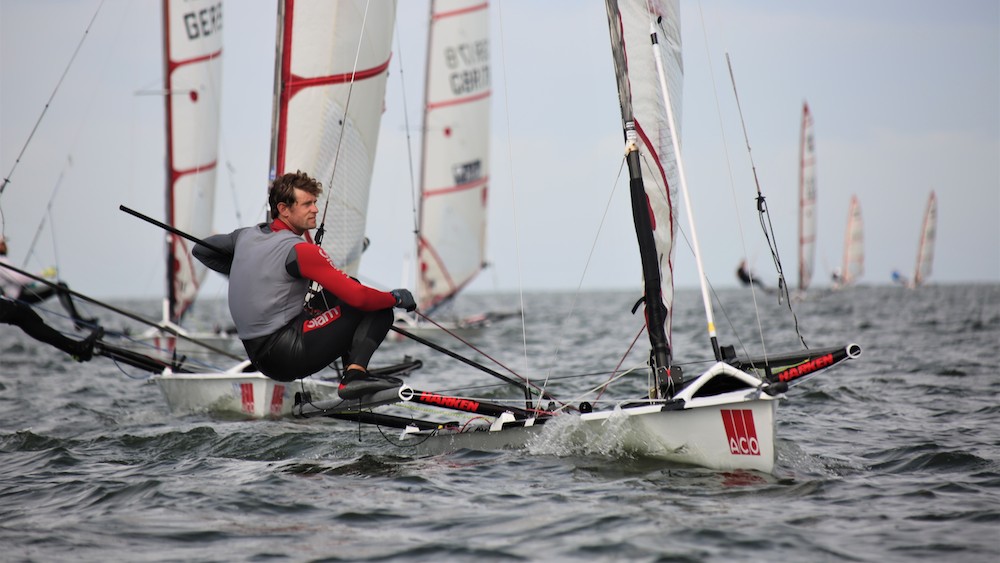 The battle for gold at the ACO 10th Musto Skiff World Championship 2019 is heating up in Medemblik, Netherlands, and despite thunderstorms and heavy rainfall on Friday; the race committee got two out of three scheduled races in.

Bruce Keen (GBR) won a second race to take over second place overall and closed the gap on Rick Peacock, who is now leading by just one point. Title defender, Jon Newman (AUS), also climbed up the leader board and is in third overall, one point behind Keen and three ahead of fourth placed George Hand (GBR).

“It is still all to play for tomorrow; it could be some tight racing”, said George Hand on the dock.

Hand and Peacock started the day in the two leading spots and enjoyed close racing, which started at 1630hours after the weather had cleared up.

Hand: “In the first race both of us were just keeping an eye on each other. In the second race I felt he was doing the same to me, but I managed to keep a point between myself and Rick.”

Hand finished 11th and 16th, but was not able to hold on to his second position overall, which was taken over by Bruce Keen.

Although Peacock remained the overall leader, he could not avoid the comeback of Keen and Newman.

“In the first race I would have been OK at the top mark, but I tried to hoist before the wing mark and then couldn’t make the mark and hit it. I had to drop the kite, do a 360, and that slowed me down. It was quite tricky,” said Peacock, who finished 12th and saw his lead decreasing to only one point ahead of Hand.

“In the second race I had a better start, but not really close enough to the biased end on the left-hand side. I struggled a bit, had a good catch up, but I was not aggressive enough.” That resulted in an 18th position, which became his second discard.

Newman got himself back in the race for Gold by finishing third in the second race of the day:

“I had a good tussle with Andy (Tarboton) and Bruce (Keen). We ended up 1-2-3. The conditions were much better for me. The wind had picked up a bit and it was more consistent. The downwind was still difficult, it had holes in it, but it was much better than in the first race,” the Australian said. “It was very close with Andy on the line.”

It was Tarboton who finished second just ahead of Newman. With Keen and Newman closing the gap on Peacock, the heat is on for the final racing day tomorrow.

“I hope to have a good time, to get off the start line nicely and don’t do anything silly,” Peacock said.

On these Worlds, Newman said: “It’s been hard-fought so far with a couple of extras, which made it fun. It’s not just been the few regulars that are usually in the front, but others who aren’t usually there. That is interesting.”

Dutchman Paul Dijkstra was flying to victory in the first race, which brought him back in the top five overall. He was even in the mix for a podium position until bad luck hit him in the first upwind leg of the second race.

“My trapeze hook broke and subsequently my joystick, so I had to replace it to at least get to the finish. I worked hard for these Worlds. I had a good season so far and am up to speed. I know I can do it, but I do have breakdowns. It is frustrating”, he said after dropping to 11th place overall.

Tomorrow will be the decisive day for the podium positions. Four favourites will fight for the medals. Two races are scheduled, but the race committee has the intention to add an extra one in.