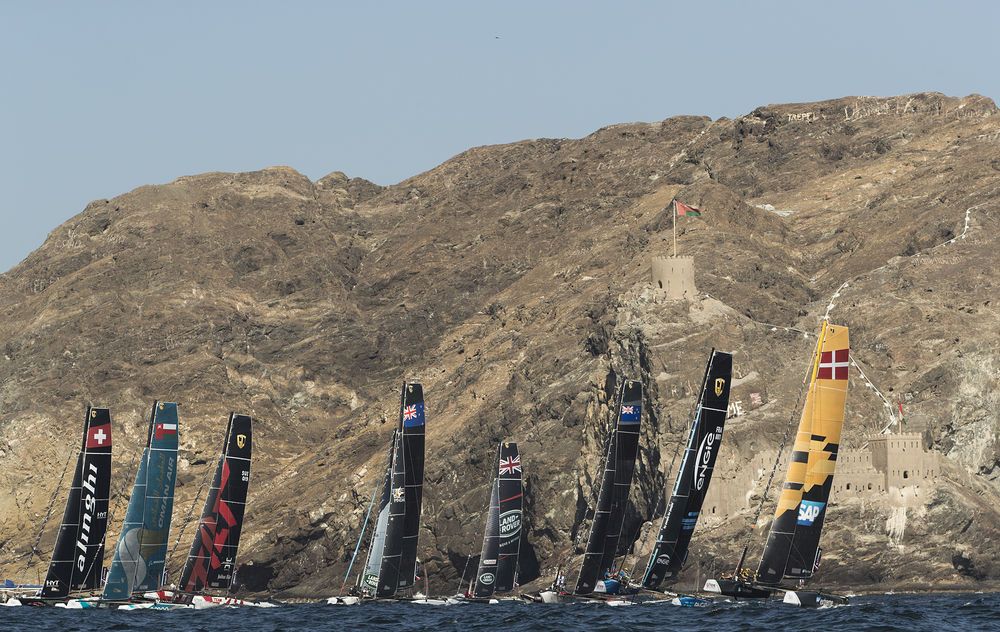 The GC32 fleet raced in front of Muscat's Old Town

Muscat's old town of Muttrah provided a stunning backdrop as nine international crews went head to head in their super-fast foiling GC32 catamarans for the first time this year.

The kick-off of the 11th season of the Extreme Sailing Series was marked with seven trademark fast and furious races around a short course set in front of Al Alam Palace, the ceremonial palace of Oman's ruler Sultan Qaboos.

A beautiful breeze of around 15 knots combined with bright blue skies and the Gulf of Oman's warm waters created perfect conditions for the 'flying' GC32s to revel in.

Fresh from their third-place finish in last week's GC32 Championship, Danish-flagged SAP Extreme Sailing Team emerged as the crew to beat as they stormed to victory in the opening race of the day before adding another two wins to their tally.

The new-look team, with America's Cup sailor and former match racing world champion Adam Minoprio at the helm, proved almost uncatchable early in the day before tailing off in the last couple of races.

“At the start of the day it felt like we had good speed and we couldn't really make any mistakes,” Minoprio said. “As the afternoon went on the breeze started to die and the wheels fell off a bit, but on the whole it was a good day. To be top of the table after day one when you're racing against these teams is a good way to start.”

Meanwhile the battle between Alinghi, winners of the 2016 Extreme Sailing Series, and their old rivals Oman Air and Red Bull Sailing Team resumed the moment the first starting gun fired.

Red Bull Sailing Team and Oman Air each picked up a race win and three thirds to see them end the day in second and third respectively, while Alinghi's three seconds puts them just one point behind in fourth.

Oman Air skipper Phil Robertson, who has taken over the helm from Morgan Larson this season, said that despite their solid results the team struggled to find the form that saw them win the GC32 Championship.

“The sailing conditions were great but it was an awfully tough day for us, and there wasn't a good feeling on board,” Robertson admitted. “The conditions were changing quite fast and we were always on the back foot and struggling to keep up. We managed to pull it together though and secure a string of podium finishes. It's pretty much what we expected and we've just got to work a bit harder to make sure we're at the top end of the leaderboard.”

Wildcard crews Team ENGIE and Team Tilt notched up podium finishes as they made impressive Extreme Sailing Series debuts while Tawera Racing ended the day with two race wins on their scorecard.

“It was a really fun day out there,” Tawera Racing's co-skipper and helm Chris Steele said. “It was a big improvement for us and we're very happy. The boys are just getting better and better. The shorter races that are more about the starts and manoeuvres than the speed suit us. We're just happy to come away with some good results.”

The young guns of NZL Sailing Team end the day one place above Land Rover BAR Academy who were forced to miss the first three races because of problems with their support boat.

An incident with Team ENGIE and SAP Extreme Sailing Team on the start line of race seven saw Land Rover BAR Academy's bowsprit damaged, threatening the stability of their mast. They have been awarded redress for the race.