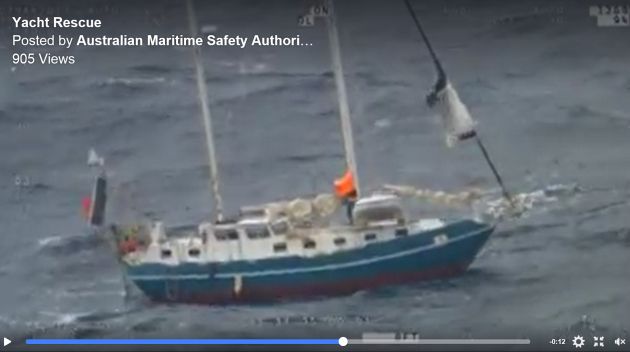 Screen shot from the AMSA video.

In a joint operation between the Australian Maritime Safety Authority (AMSA) and NSW Police, two people have been rescued from a yacht in distress about 210 nautical miles (NM) east north east of Sydney.

AMSA has been in regular contact with the yacht since March 4 after they informed the Joint Rescue Coordination Centre (JRCC) of a broken rudder. The two crew, an Irish and French national, were on board the 40-foot yacht that was travelling from New Zealand to Australia.

AMSA issued a broadcast to shipping in the area requesting assistance which was answered by the container ship ANL Elanora.

In six-metre swells and gale-force southerly winds, the Nemesis reached the yacht at 8.30am this morning (Wednesday 8 March 2017).

Both the man and the woman were successfully transferred to the Nemesis with the assistance of the ANL Elanora and are reported to be uninjured.

The Nemesis is now returning to Sydney and is expected to arrive at 8.30pm tonight.