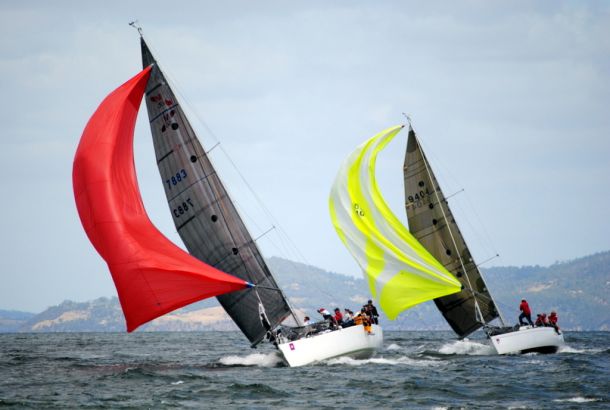 Hobart’s three Mumm 36s are within one point of each other after three of the five race series in Bellerive Yacht Club’s Eastern Autobody Winter Series. BYC’s Tas Paints (Ian Stewart) heads the Division 1 points by just one point from HostPlus (Jeff Cordell) while Madness (Gavin Adamson) from the Royal Yacht Club of Tasmania is on equal points with Host Plus after winning today’s race.

Conditions were ideal for winter racing today, chilly but sunny with an oscillating breeze that swung between north-east and north-west during the morning, ranging in strength from 6 to 12 knots, with some stronger gusts.

Today saw Gavin Adamson achieve his best result yet against his opponents from Bellerive, with Madness finishing in third place across the line, with Tas Paints and HostPlus comfortably astern in fourth and fifth. On corrected time Madness won the race from Nexedge (Ian Douglas and John Mills) and Pirate’s Pride (Peter Masterton) while Tas Paints (8th) and Host Plus (9th) finishing at the bottom of the Division 1 fleet.

Veteran yachtsman Tom Kirkland sailed Ragtime to victory in Division 3, lifting to just two points behind series leader Kharis (Andrew Dalby) which placed sixth today. Kharis is on 8 points after three races from two wins and a sixth while Ragtime’s score is 10 points from placings of 3-6-1. Equal third overall on 11 points are Off-Piste (Paul Einedor) and Magnum (Colin Gray).