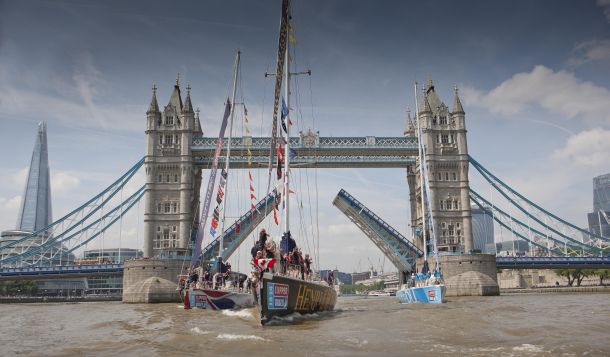 Winning boat Henri Lloyd and the Clipper Race fleet have returned to a heroes’ welcome in London eleven months after setting off. Having conquered Mother Nature’s toughest conditions during the 40,000 mile ocean odyssey, the team was victorious in the overall Clipper 2013-14 Race, claiming a total of eleven podiums and five overall wins to beat second-placed GREAT Britain.

Thousands of spectators lined the banks of the River Thames to welcome home 270 international amateur crew on 12 70-ft yachts as they formed a Parade of Sail which concluded with Tower Bridge lifting for the top three teams.

A total of 670 crew members from 42 different countries have battled hurricanes, survived a tornado, dealt with medical evacuations and the miraculous rescue of a man who went overboard in the Pacific Ocean for 90 minutes.

Henri Lloyd was presented with the Clipper Race trophy at a prizegiving ceremony in St Katharine Docks this afternoon having been victorious in the world’s longest ocean race.

Canadian Skipper Eric Holden said: “It has been a life-changing adventure for the crew and I. The team’s drive, determination and strength has led us to exhaustion at times.

“Whenever I thought the team couldn’t be pushed any harder, they dug deeper through some of the worst sailing conditions I have ever seen on the planet. This is a very special moment for the team and I to be crowned champions.”

Sir Ben Ainslie CBE, BAR Team Principle and Henri Lloyd ambassador, congratulated the team.
“What a fantastic effort by Eric and the team on board Henri Lloyd. The race has been a real marathon around the world over the past 11 months. To take part is an incredible achievement and congratulations to all those who helped the team claim the win overall.”

Clipper Race founder and chairman Sir Robin Knox-Johnston, the first man to sail solo, nonstop round the world in 1968/9 said: “The crews have crossed all the world’s oceans, suffered the frustrations of the calms, the apprehension of the largest waves to be seen anywhere on the planet, experienced the vagaries of the weather systems, seen ports and scenery that they never expected, met people from vary different cultures, and, perhaps most of all, shared all these adventures with a group of people who were strangers just over a year ago but who will now remain friends for life.

“They have widened their horizons and have memories to cherish that can only be won through real hands-on participation.”

Crew members range from doctors to lawyers, farmers, housewives, sports stars and students and are aged between 18 and 74. 40 per cent had never sailed before they participated.

Meg Reilly, an American round the world crew member on Henri Lloyd, said: “This year has been a test of will and determination, finding our individual limits and pushing beyond them.

“At the beginning of this journey, our skipper Eric built this team on a foundation of respect; and that's why we are a happy boat who ultimately became round the world race champions. We've learned more this year about ourselves and human nature than we ever will. The sailing part was just an extra bonus.”

The race left the UK’s capital on 1 September 2013 and since then the teams have visited 16 ports in 11 countries and six continents during the 16-race series. The circumnavigation sees people from all walks of life join together in the only race of its kind for amateur sailors.

Each team is led by one professional skipper.

The Clipper Race was created in 1996 by legendary British yachtsman Sir Robin Knox-Johnston to give people from all walks of life and ages the opportunity to experience ocean racing including the option to complete a full circumnavigation.

Sir Robin became the first person to sail solo, non-stop, around the world 45 years ago, when he completed the Sunday Times Golden Globe Race on 22 April 1969 aboard his 32ft ketch Suhaili. At 75 the grandfather of five is still sailing competitively and will take on another transatlantic solo race this autumn in his open 60 yacht Grey Power.