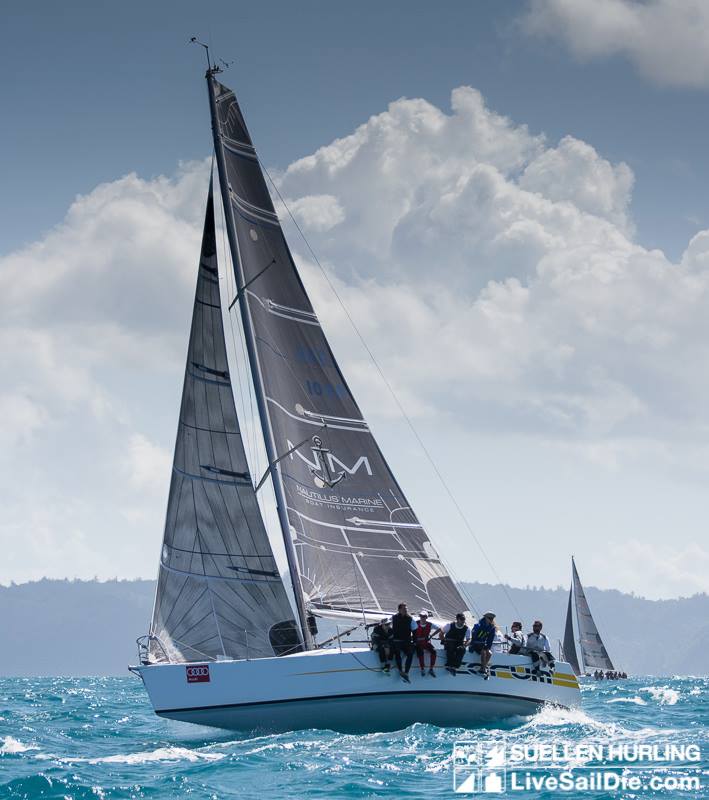 The Mumm 36 was designed by Farr as a highly competitive boat to sail at grand prix level at reasonable cost. CORUM is that and then some. Starting life as an Admiral's Cup racer she has since been extensively modified with a Hugh Welbourne T bulb keel, mast section replaced and moved aft setup with twin 22 degree swept back spreaders and a squaretop main to be even quicker on all points of sail and a record to back it up. There was a huge scope of works in 2005 to remove and change keel to hollow stainless section with modern bulb and a much more modern underwater profile in step with modern keel shapes.

The new 7/8 fractional rig set up meant a stiffer mast and all new sails including jibs and masthead spinnakers allowing for in line peels from the new halyard configuration.

CORUM is very well known on the QLD Coast as a proven placegetter in IRC Offshore events and Windward Leeward racing. Bang for buck it is very hard to find a 36 footer in Australia that delivers as high performance and is as rewarding to sail as this modified Mumm 36. In light air and hard downhill running she is still a weapon getting up on the plane easily.

Built by Cookson Boatbuilders arguably the best of the Mumm range, the hull and deck are very strong and showed zero osmosis. Great attention has been paid to the underwater surfaces which are faired beautifully and antifouled with VC Offshore in Nov 17. The deck was stripped bare, faired and repainted in 2014 with Awlgrip and presents very well. The dark cabin windows were replaced in 2014 also. The hull was repainted in 2010 with Awlgrip and is still in good condition.

Corum is configured with an IRC Prodder for a top down furling MHO and A1.5 / A3 but also runs a carbon spinnaker pole and Symmetrical Spinnakers for the best of both worlds. She has twin running backstays for the Norths Squaretop or can be reconfigured easily back to the pinhead main with one fixed backstay. Adjusting the rig is easy – she comes with mastjack and full shimset. Fully adjustable forestay, caps and lowers, intermediates.

A lot of time and attention has been paid to keep this boat light with a new carbon boom in 2016 and soft vang setup.

Cockpit layout is customised for clean controls and weight savings. The original control box in cockpit has been modified for easier use of controls and weight gains. She is truly a beautiful boat to sail and provides a terrific level of feel through the high aspect ratio rudder and centre of effort.

Corum is an IRC threat at any regatta and a high quality machine that does not need anything spent to go racing right now. To build a boat like this now would be significantly more than replacement, 36 foot is the right size for east coast, they are half the cost of 40 footer for sails and gear.