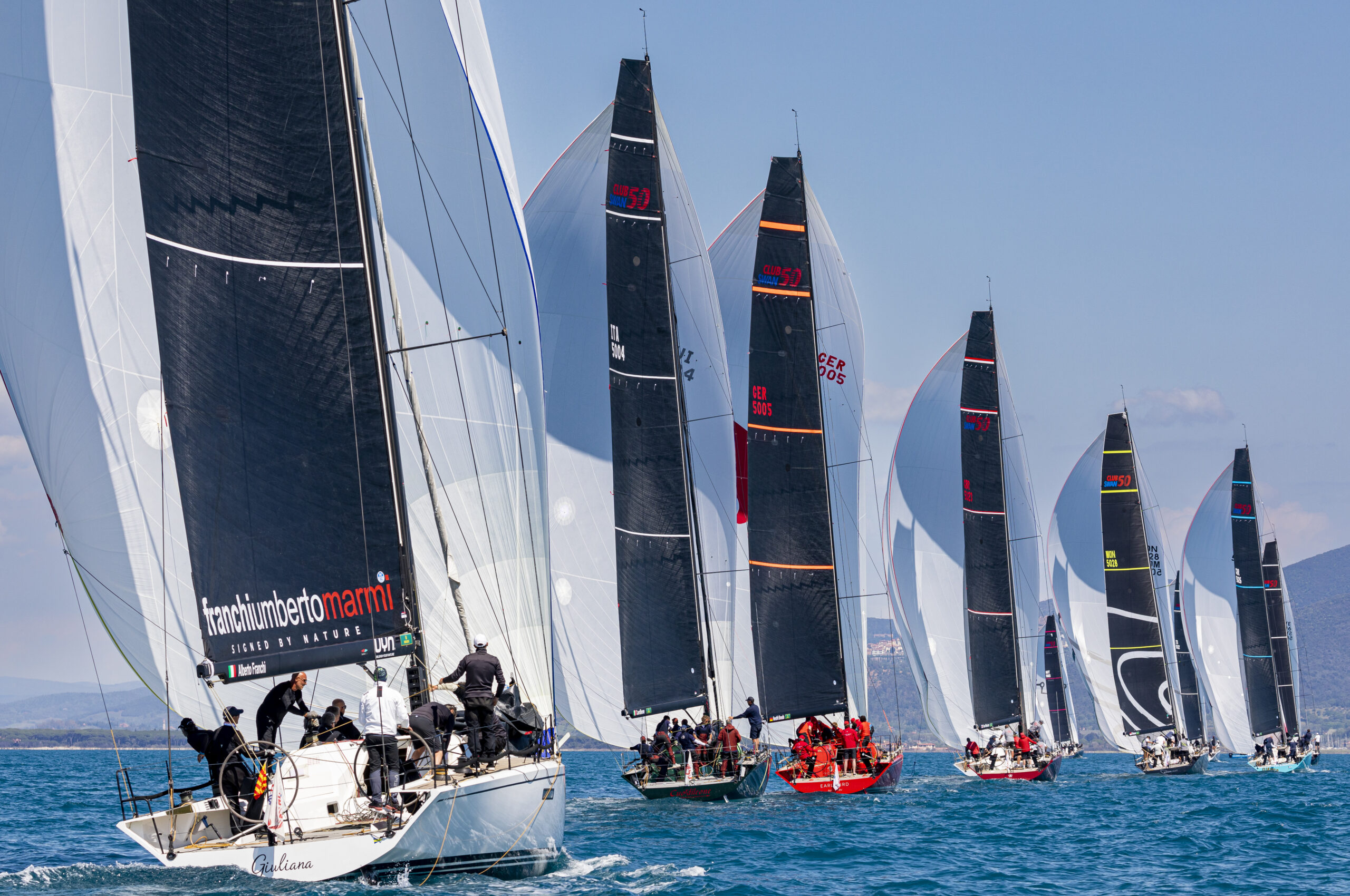 Italy: Preparations finished, practice completed, the Swan Tuscany Challenge got serious today – and with four different winners in each of the four races held the competition looks like it will be wide open across the two one-design fleets.

On a day of varied conditions out on the Gulf of Follonica results on the water confounded some of the expectations generated in the practice race, as well as the form book from previous seasons.

In the 13-strong ClubSwan 50 class the first race saw a nail-biting finish, with Hendrik Brandis’ Earlybird leading the fleet around most of the course before holding off a last-ditch challenge from Andrea Bianchedi’s Drifter Sail to take the win by just three seconds, with Stella Maris completing the podium.

In the second race the Austrian-flagged Stella Maris further lifted her game, with August Schram’s team taking a well-deserved victory to lead the ClubSwan 50 class on countback, level on points with Drifter Sail who placed second again.

A delighted Schram said: “A combination of many little things come together to give us this great result today. Firstly, we have new sails and have done some great training. The team is relatively young with just five years of sailing in big boats, but we are all experienced dingy sailors and work as a super tight team. We are really pleased, and it has paid off well today!”

At the same time the team aboard Drifter Sail were equally pleased with their performance: “Our ambition of course is to be at the top of the ranking, and we have come from winter training so we are ready for the season,” said navigator Simone Busonero.

“The conditions were eight to 10 knots with very flat water and a bit of southwest breeze – it was very nice and sunny and really good to be here in Scarlino for the first event of the season.

“We have been able to sail with the same crew for the third season and we try to be as consistent as possible – a day like today means a lot.”

Sweden’s Regina 2.0, co-owned by Jacob Wallenberg and Gutta Johansson, are third overall in the ClubSwan 50 class with a consistent fifth and third place, while Earlybird slipped to fourth with a ninth place in the second race.

In contrast, Nautor Group’s usually competitive Cuordileone, helmed by Leonardo Ferragamo – who won Tuesday’s practice race – finished eighth in both races. Meanwhile another regular contender, Marcus Brennecke’s Hatari, was penalised for a rule infringement in the second race and ended the first day at the foot of the table.

It was also a close-run affair in the ClubSwan 36 class with the top five boats in the seven strong fleet each taking at least one podium place apiece. John-Christian de Champs’ Cuordileone finished the day top of the table after taking a third spot followed by a win in the second race.

“We had a marvellous day,” said tactician Diogo Cayolla. “The wind was light but perfect conditions for the first day of racing. It was our first real race, so we are happy to end up like this. I think we did pretty well, we were able to do most of what we wanted to do, and we had good speed.

“Even though we have not been able to train very much we had some good manoeuvres, and the team was working really well for our first day of racing. When that happens you get in front. Looking ahead we expect the wind to increase with some breezy days and some good sailing.”

Just a point behind is Giangiacomo Serena di Lapigio’s G-Spot, which held off Nikolai P. Burkart’s Goddess to win the first race of the day. Mehmet Taki’s Facing Future is in third spot overnight with a 4-2 scorecard.

“We didn’t start the first race so well, but we were able to climb up to first place – in the second race we were fourth, so we ended up second and we are happy,” said Lapigio. “In light winds you need some luck and I would say we were missing some in the second race.”

Back ashore in the Marina di Scarlino, the Tuscan home of Swan in the Mediterranean, owners and crews were able to celebrate at the daily prize-giving ceremony held in the Regatta Paddock in the heart of the elegant marina complex.

Garmin – a ClubSwan Racing partner across the 2022 One Design season – provided the awards for the winners across the fleet.