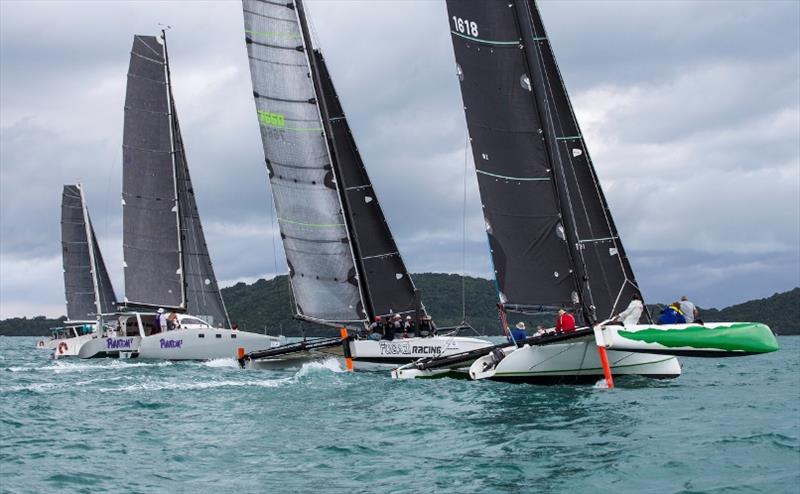 Multiple races today put smiles on competitors' faces and got the 2019 Cape Panwa Hotel Phuket Raceweek back on track, with IRC Zero, IRC I, IRC II and Firefly 850 completing three races, while Multihull Racing completed two and Cruising Monohulls one.

All this racing after an AP on shore greeted sailors first thing in the morning, while an offshore storm cell passed taking the breeze, momentarily, with it.

The unusually wet and stormy conditions so far have caught many by surprise, and today was payback for all the hard work the on-water Race Management team has done, getting in some fair racing for all the classes.

In IRC Zero (which is being jointly scored with IRC I entries) Ray Roberts and his crew on Team Hollywood (AUS) had a good day, posting three bullets. Adding to their one yesterday, they comfortably lead the standings. In the first race of the day, however, there wasn't much in it, as the Sydney 40 AquarII (AUS) was less than a minute back on corrected time.

In IRC I, a double-win in today's first race for AquarII (AUS) – line honours and on corrected time – gave the Australians their first win of the series. Looking to repeat the result in the second race, AquarII were edged out of it by just six seconds on corrected time and had to settle for second, behind Megazip (RUS) in first while Jessandra II (GBR) placed third.

Damage to East Marine Emagine in the second race resulted in a DNF, but they bounced back in the third and final race of the day to win it, and stay in contention.

A second in the final race for AquarII and fourth for Megazip see these two tied at the top with just one day to go.

The conditions haven't fazed Phoenix (DEN), and after barreling across the finish line yesterday in a storm with spinnaker up, she was back out there today with bit between the teeth. It paid off, with three more bullets and a comfortable lead in IRC II.

Elsewhere in the class the two Platus are having a battle royal and today it was Sydney Premier Karting Park (AUS) that got the better of The Dragon (AUS) and with that are now tied on points. A 3,3,4 scoreline today see Farrgo Express (AUS) four points further back.

In a single long race for the Cruising Monohull rounded a mark off the north-eastern tip of Bon Island, then around the safe water mark off Laem Panwa before heading into Chalong Bay to round the outer port channel mark, Koh Lon and to the finish.

With just five seconds separating them across the line, Lady Bubbly (AUS) corrected out ahead of BeauX Esprits (AUS) to claim their first win of the series. After handicaps were applied, Venture (AUS) slotted into second place and BeauX Esprits had to settle for third.

Two races for Multihull Racing and two more wins for Phantom V (AUS), making it three from three and a healthy lead at the top of the standings. Bonza (GBR) sailed to two second places and hold onto second overall ahead of Fugazi (AUS) in third.

Voodoo (GER) reveled in today's conditions and found their groove adding two wins and a second to their tally. In the process they jump to the top of the standings tied on six points with defending champion, Twin Sharks (GBR), which finished the day with a 2,1,2 score.

Despite two third places today for Surf Patrol (AUS), they remain in fourth overall behind Moto Inzi (FRA). If a fifth race is completed tomorrow, expect some changes as the drop race is introduced.