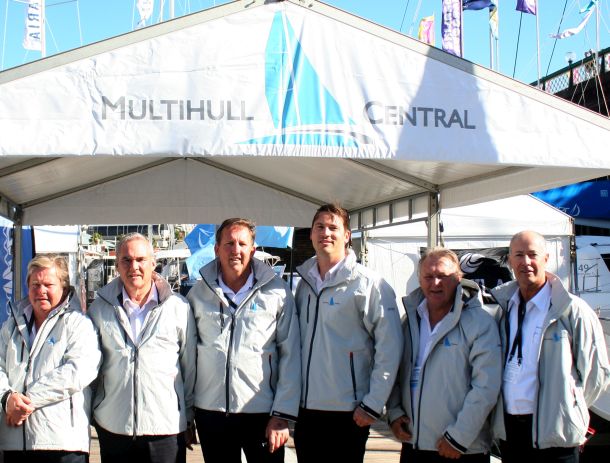 Multihulls are the fastest-growing category in the sailing industry at present, with increasing entries in regatta weeks and many more cruising cats heading along the coast or out into the Pacific.

According to Multihull Central director Brent Vaughan, his company is supplying many of those boats.

“We have seend incredible growth in the last few years, with a 64% increase in business in 2014 and 2015 on track for a strong year also.”

Outremer fills the top-end of the Multihill central range. The Outremer 5X was 2013 European Yacht of the Year and the range includes the new 51 and 45 models.

“With over 200 boats built and 30 years experience building fast, safe but beautifully simple catamarans, Outremer have built up a world wide reputation for their speed, quality and ocean going ability,” the Multihull Central website records. “The tiller steering that compliments the wheel steering is a testament to their desire to build catamarans that are a pleasure to sail.”

Seawind is an Australian legend, having been formed in 1982 to design and build performance cats for the Australian market. Now built in the Seawind Vietnam factory, the range follows the Seven Principles of Multihull Design (see related content).

In addition to these sea-going cats, Multihull Central also represents the Corsair range of trailable trimarans.

“Corsair Marine has more than 2000 trimarans sailing in all parts of the world. From one design racing to family cruising; day trailer sailing to longer explorations of the Arctic and tropics, our Corsair Marine fleet will help you to achieve your sailing dreams at twice the pace,” says the company.

Multihull Central will have a display stand at the Sydney International Boat Show from July 30 to August 3 and also has six locations including Sydney Harbour), Manly, Gold Coast and Airlie Beach (QLD), Melbourne and Perth.

For more information, see related content or go to www.multihullcentral.com or call 1300 852 620.