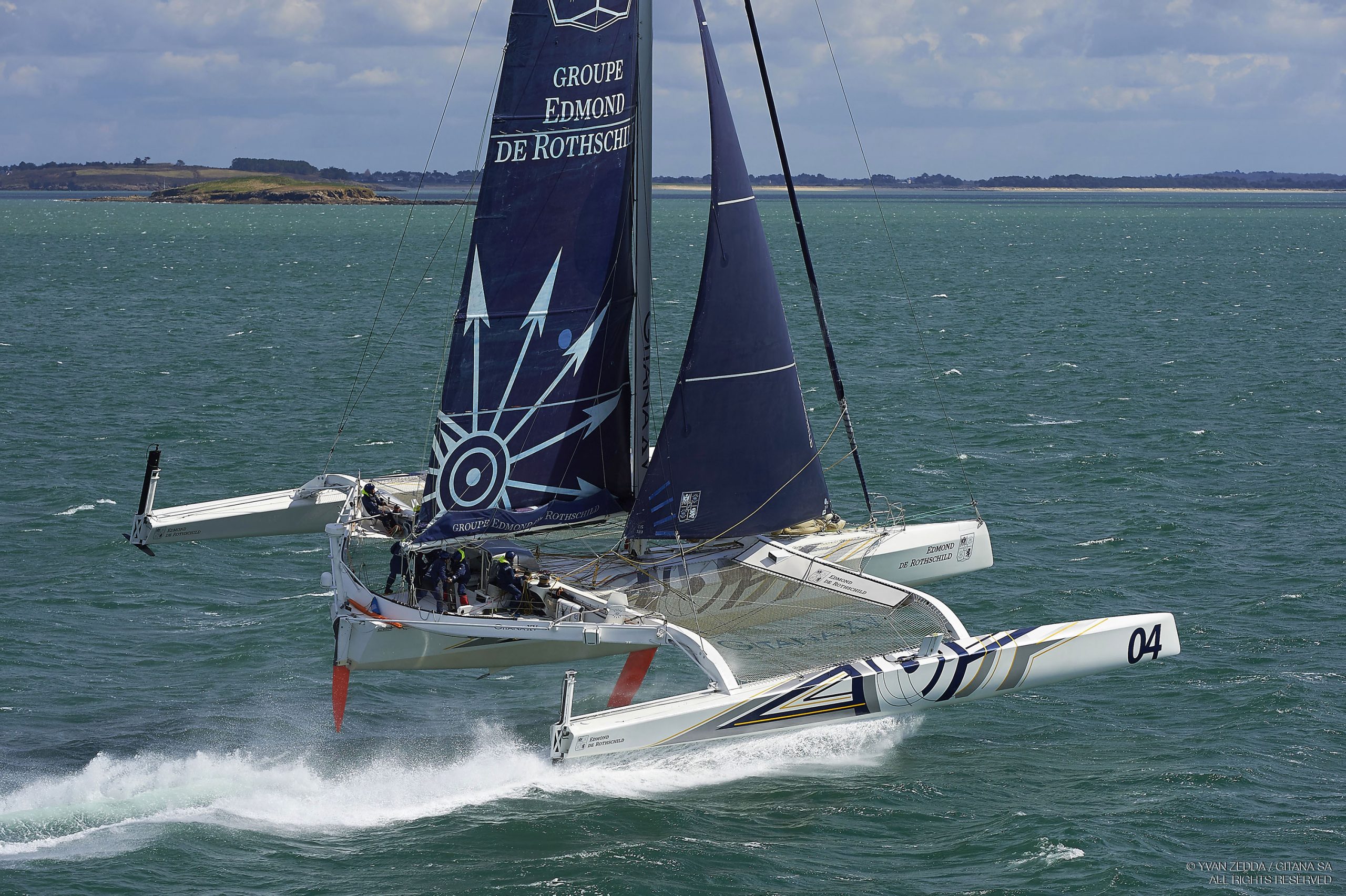 In late 2013, the members of Gitana Team embark on an adventure that is as thrilling as it is complex: overhauling the Multi70 Edmond de Rothschild, a 70-footer initially built to race in crewed configuration on a one-design circuit, in a bid to become the first flying offshore trimaran. It is an ambitious project. Like Rome, which wasn't built in a day, the transformations to Gitana XV call for over two years' research and innovation to satisfy the objectives of the five-arrow team. However, everyone agrees that the interplay is very worthwhile. Just a few days ago, equipped with her new appendages, the Multi70 Edmond de Rothschild definitively took flight, racking up some 43 knots on the speedo in 20 knots of breeze and thus validating the efforts of a whole team, supported by the passion and commitment of the boat's owners, Ariane and Benjamin de Rothschild.

There is nothing new about the idea of flying� but the 34th edition of the America's Cup, which was held in 2013 in San Francisco, revived this quest to such an extent that it has changed the face of contemporary offshore racing, modifying the vision and the ambition of the sailors who shape the milieu. The spectacular images of the AC72s, the winged catamarans created during the last Cup, quickly find an echo within Gitana Team. However, true to the aspirations which guided its creation in 2000, the stable founded by Baron Benjamin de Rothschild is keen to gear its sights towards the open ocean. We review the team's perfectly choreographed ramping up of activities.

In this way, from late 2013, a series of studies is launched with a view to a participation in the Route du Rhum in the main Ultime multihull category. In a bid to do well and stand a chance of keeping pace with the class' XXL competitors, which measure between 30 and 40 metres compared with Gitana XV's 21 metres, all the appendages (rudders and foils) need revising, as does as the sail plan. However, there isn't much time left and the full jobs list is abandoned in favour of enhancing the boat's reliability in a manner that is more coherent with the sports programme: T-foil rudders replacing the classic rudders. A new genre of appendage for an oceanic trimaran, they are the result of a close collaboration between the Gitana design office, naval architect Guillaume Verdier, who is as talented as he is modest, and the members of Team New Zealand, Jamie France, Bobby Kleinschmit as well as the Pure Design company. The intended speed gains are considerable. However, as ever, the theory still has to be transferred to the water. Sébastien Josse's very fine third place in the famous transatlantic race between Saint Malo and Pointe-à-Pitre has a rather positive ring to it for the five-arrow team.

� The system of lifting surfaces developed by Gitana Team, in collaboration with Guillaume Verdier's team, has clearly proven itself and the rudders have made it to Guadeloupe intact. This transatlantic has enabled us to validate the system's reliability in rough weather over the first days of racing, as well as throughout the remainder of our journey. The T-foil rudders create an indisputable turbo effect on the boat on certain points of sail. They are also appealing in terms of safety as we've made solid gains in stability, which notably enabled me to go on the attack during the first few days in the big breeze, without feeling that I was putting myself in danger. Gitana Team's gamble was a daring one given the short amount of time we had for development and making her reliable but the experiment is a success. There is still considerable room for improvement and the next stage of the adventure promises to be thrilling,� Sébastien Josse comments on his arrival in Pointe-à-Pitre on 11 November 2014.

The feedback from the Route du Rhum backed up the theories put forward by the naval architects and reinforced Gitana Team's choices. For all that, Sébastien Josse and his men are only at the start of their journey. Now free from any sports programme, the Mulit70 Edmond de Rothschild is to become a fantastic test laboratory. With the appendages trialled during the Route du Rhum proving to be super efficient, it's time to switch to the second phase of the initial project, namely equipping the trimaran with new foils. Favouring a research approach, it is decided that these appendages must be asymmetric: L to port and C to starboard. This highly informative and promising test phase results in the boat's debut flights offshore.

The third and final phase must enable Gitana Team to take the project to another level and live up to the expectations of the original project. To achieve this, the members of the technical team have to make structural modifications to the platform, particularly around the foil casing. These will be the main focus of the winter refit. Meantime, new foils with profiles more geared towards flight are built. On 22 March, Gitana XV puts in her first tacks as the 2016 iteration: the sensations are excellent as are the speeds! With many miles in flight making between 35 and 40 knots, the boat racking up a record 43 knots in 20 knots of breeze and the shared sentiment that they have a lot more to discover� The first part of the gamble has paid off: the Multi70 Edmond de Rothschild has just taken flight!

�Theory is one thing, putting it into practice is another. Despite the calibre of the project's contributors and the ground we've covered in terms of digital calculation, nothing replaces miles on the water. Being in a position to benefit from a platform like Gitana XV throughout this period of reflection, followed by the construction of the future Maxi, is an incredible opportunity, which we've been able to make full use of.

Dedicated to flight, this second test campaign has proven to be more than positive! The sea trials we're carrying out right now are just incredible, so much so that I never thought I'd see the day� With our new appendages, we've exceeded speeds we hadn't expected to reach in this configuration, or at least not as quickly! Speed is a very important thing, but on top of that these latest sea trials have also taught us a great deal about how the boat handles, which is clearly very different to our understanding thus far. The boat no longer floats, she flies along on two blades� We've passed a very important milestone. We've also learned very interesting lessons about what steps to avoid in the future in terms of both our architectural choices and the on-board systems. As such, the design office has a significant amount of data with which to continue its research. The work never stops and the sea state is still something we need to make progress with!� explains Sébastien Josse

However, the incredible sensation of flight on such a machine, as pleasant as it is to be powered up at over 40 knots, is not Gitana Team's only objective of course. Following the announcement made in May 2015, the five-arrow team also began construction of a maxi-multihull at the Multiplast yard in Vannes, south-west Brittany back in November. This craft, the twelfth in the history of Gitana Team, will reap the full benefit of the trials carried out on the Multi70 Edmond de Rothschild from 2014 to 2016. Indeed, Sébastien Josse and his men have been able to build the future on the water rather than solely at a desk.

�Today is massively satisfying and I feel immense pride for the entire team that I manage. The project seemed a bit crazy when we began in late 2013 but once again, within Gitana Team, we benefited from the unfailing support and enthusiasm of the owners of the boat, Ariane and Benjamin de Rothschild. When we presented the project to them, they immediately understood the challenges and the appeal of staking out the future and they didn't hesitate an instant in encouraging us along this pioneering route. We were in a transition phase because we were at the dawn of major technological change. Indeed, the switch from sailing in Archimedean mode to flight mode might be compared to the switch from steam engines to combustion engines. Although the America's Cup had gone a long way to showing us the direction things were heading in terms of flight in inshore racing, transferring that knowledge to offshore sailing was a whole new ball game as the very philosophy of flight is different. It's a far cry from simply getting big multihulls to fly around the world as the AC72s did in San Francisco bay� It's something else entirely, but the expected gains are huge and this is where the future's at. We've passed a milestone and a new adventure is opening up in front of us!� admits Cyril Dardashti, Director of Gitana Team.