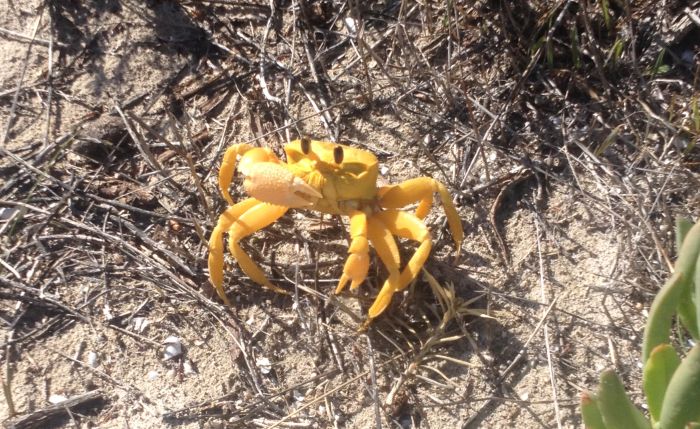 One of our most common beach crabs eats just like a picky two-year-old, according to new research from Edith Cowan University.

Researchers examined the diet of golden ghost crabs (Ocypode convexa) living on sandy beaches in WA’s Mid West. One of the fastest animals on earth for their size, golden ghost crabs are particularly vulnerable on high-activity beaches.

The study is the first of its kind and important in developing our understanding of beach food webs and the ecosystems of beaches.

The ghost crab’s diet is mainly made up of algae and other plant material, but the researchers found that when given the choice in a lab setting, the crabs would opt always opt for fish.

On average, the crabs consumed fish at an impressive rate of 17.52mg per hour per gram of body weight. That’s equivalent to an 80kg human eating 1.4kg of fish every hour during the study period.

The research team from ECU’s School of Science was led by Professor Glenn Hyndes, who said it was a surprise the crabs had such a marked preference for fish.

“It’s a truly impressive amount of fish these species of ghost crabs are able to eat in a relatively short space of time,” he said.

“We believed the crabs would go for fish over the plant matter as it’s much more nutritious, however we were surprised by just how much they preferred the fish.

“From a scientific perspective, this is very important as the role of carrion (animal carcasses) including fish is likely to play a larger role than we thought in the diet of these crabs.

“Ghost crabs are found in large numbers on beaches around Australia and they have an enormous capacity to remove carcasses from beaches.”

Researchers collected wild ghost crabs from three beaches in WA’s Mid West region and examined the contents of their stomachs to determine their normal diet.

Additional crabs were collected to test their dietary preferences in a lab-based experiment.

They were exposed to two different scenarios where they were offered a single food source or a selection of five (fish, snails found in the dune systems, kelp, seagrass and a species of dune plant).

Golden ghost crabs are one of 22 species of ghost crabs found around the world. They’re scavengers sometimes known as our natural beach cleaners. They live in burrows along beaches and in the adjacent sand dunes.

The article 'Trophic ecology of ghost crabs with diverse tastes: Unwilling vegetarians’ was published in Estuarine, Coastal and Shelf Science.