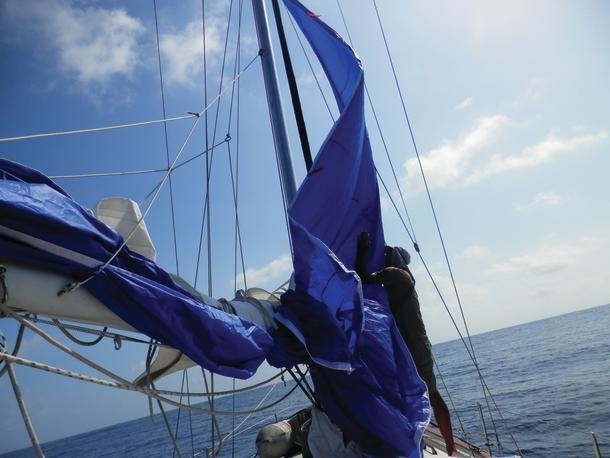 Hoisting and dousing is easy.

Our boat, Blue Pelican, is a Pearson 424 ketch. My wife Jody and I have been continuously cruising her for seven years, mainly east coast USA and Caribbean. In 2015 we transitted the Panama Canal and sailed Blue Pelican across the Pacific to Brisbane, Australia.

In reviewing our sail plan prior to our Pacific crossing, I recalled having read about the concept of a nylon mainsail many years ago. A light wind mainsail. How good would that be for any long stretches of light wind? A condition that will most likely be encountered at some point in crossing the Pacific Ocean.

When you have just enough wind to fill a sail, but then you get that slap back with the next bit of wave or swell. That ‘fill and flop’ motion I call it. That jolting is tough on the rigging, particularly the gooseneck connecting the boom to the mast and tests the breaking strength of the vang. Plus it is just damn annoying that banging, isn’t it?

A nylon mainsail? I did not know anyone with one. I had been asking around for a while with those that may know. Light wind work only, upwind or on the beam, downwind wing on wing with a nylon drifter set on a pole. Would it work?
How would it work? Where could I get one? How much would it cost? Would it be worth it?

Well, my research over recent years had uncovered very little. I had found an old photo of a nylon mainsail on a vessel on the web. But no details other than the grainy picture itself.

The Pardey’s made mention of a nylon mainsail in one of their books. Lynne and Larry believed a nylon mainsail was conceptually a great idea, but they had not come across one physically. I spoke to some sailmakers, sure they can make one. Any proof of having actually made one? Sure, oh, umm, well, no, not really.

So anything we order will be of our own design. What parameters do we need to incorporate?

My primary role for a couple of seasons of ocean racing was as mainsail trimmer. I will be the first to tell you I am neither professional nor expert at sail/design/making/ or sailing itself. But one of my previous and very cantankerous ‘so-therefore-must-be-good’ skippers would tell me all the time to “experiment, keep tweaking, get more speed.” In light winds, he would say “keep the boat moving, keep the boat moving.

“Any idiot can sail a boat when there’s plenty of wind around, the test of a real sailor is when the winds are light.” He also had a few other phrases that are best not put in print, so, back to this nylon mainsail business.

Willing to experiment and improve light wind performance with a sail that remains set over one that fills and flops, but having no sail design to copy, ours was going to be an original effort.

What we know about nylon is that it is relatively strong, to a point. It is light, so it is easily handled. It stretches. It can be stuffed into a bag to make easy storage or a beanbag type cushion chair if you want. Its ultraviolet capability is not good, the UV protection comes from the pigment. The darker the pigment, the better the UV protection.

What weight of fabric should we use? Well if we take our spinnakers as a point of reference, a 0.75 ounce weight would seem too light for the sail size and intended purpose, 1.5oz seems more practical and the basic engineering calculations that I ran seemed to support this as being suitable.

The sailmakers that I was considering were thinking toward a fuller shape. I did not want to go that way because I wanted this to have an upwind ability.

Also, nylon is going to stretch, so I wanted a flatter cut sail to minimise the sail misshaping. A standard to flat cut main design was the go.

I also wanted the corners labelled so I could easily identify the correct ends for quick hoisting, I do not want to be on that deck any longer than necessary.

Also, the Dacron main could remain at ready, flaked on the boom inside the lazy jacklines for immediate hoisting once the wind filled in to ensure the nylon main did not get damaged.

I spent a lot of time working this one out. I had envisioned using multiple slides to keep the nylon sail attached to the mast but this would mean opening the gate to insert the slides. A mock trial underway proved this to be too difficult, I needed
a simpler attachment method.

Sometimes the most thoroughly thought out methods just do not work practically.

The solution was to keep a spare slide on the track above the Dacron mainsail’s head slide but attached by a thin cord.
It goes up with the Dacron sail where there is space above full hoist on the mast groove and returns with the douse.

With the Dacron sail at rest between the lazy jacks, I simply detach the slide from the Dacron main’s head and attach it to the nylon mainsail’s head. The tack is attached by strop to the reef hook on the boom and the clew is tied to the boom end. Simple, quick and easy.

Raising the nylon main using the main halyard is also quick and easy. Indeed, it is amazingly easy to hoist and set and just as easy to douse. Being the soft and light material that it is, with no battens, it slips up inside the lazy jacks and is raised in moments.

The yacht does not need to be pointed directly into the wind, remember this is in light winds. The fact that it is loose luffed has not affected its sailing performance. Since it comes down so easily and stores so thinly, I often leave it laying alongside the boom with a bungy cord system holding it in place.

It takes little time or effort in swapping the mainsails. In effect it is: release the halyard; haul down the sail, being a soft fabric and no battens means no snags or hold ups in this process; untie the slide from the nylon mainsail and reattach to the Dacron mainsail’s head slide, again a matter of moments; hoist the Dacron mainsail.

When we did our Pacific Ocean crossing, we travelled a path north of the Galapagos and encountered flat seas and a period of very light winds. The nylon main proved to be what we had hoped.

With a true wind speed of around five knots, we were able to bring the apparent wind around ahead of the beam to create enough extra breeze that we were riding along at around 5kt, quiet as a nun, on good course and feeling very proud of our new sail.

We achieved good boat speed, saved wear on the rig with Blue Pelican and crew sailing along very happily.

Once the wind picks up to say 8kt or just above, or we saw a change or squall coming, then the nylon came down and the Dacron went up. We have held pretty well to this, because we do not want to overstretch the nylon and wreck its shape.

Our passage was not as expected even though we do a lot of planning and forecasting using weather gribs and pilot charts and local knowledge where possible. After rounding the Galapagos from the north and west, we encountered winds from directions that have not been recorded on the pilots, directly on the nose. We ended up having to sail south using the lulls and squalls.

The way that we could make progress was to sail in any sort of direction available to us to get under a squall system, discernable by the cloud above it. Then use the force of the squall winds to gain some ground and direction and get us closer to the trade wind belt.

In these lulls, we had the advantage of the nylon main to help us keep moving. Being able to douse readily and hoist the, usually reefed, Dacron main for the squall meant that the sail changes were not too physically demanding. I think I did twelve changes on one day.

So, for us the new sail worked well and was a valuable contributor to our Pacific crossing.

Which sailmaker did we use, you are asking? And the cost? We chose Lee Sails out of Hong Kong. For my part, I have found it to have a good reputation.

I had been advised by another Lee customer to be very detailed in the order. The quality met expectations, except
for the small matter of the labelling on the corners which was handwritten in felt pen. That was a shock and not in keeping with the rest of the sailmaker’s workmanship.

It cost US$600. They deliver worldwide, we had ours delivered direct to Panama. As an aside, there are better countries to have things delivered to than Panama.

Being nylon, there is a wide range of bright colours available. We wanted to reduce UV damage as much as possible. I liked the dark blue, but thought that would be too pirate-like, so chose a medium dark blue.

Laying here at anchor in the Whitsundays off the Great Barrier Reef, we have not used the nylon main for a while since there is a reasonably persistent wind. But as we journey north from Australia, through Indonesia and South East Asia, light wind conditions are expected to prevail for lengths of time and we expect to again have that nylon mainsail earning its keep once again. ≈