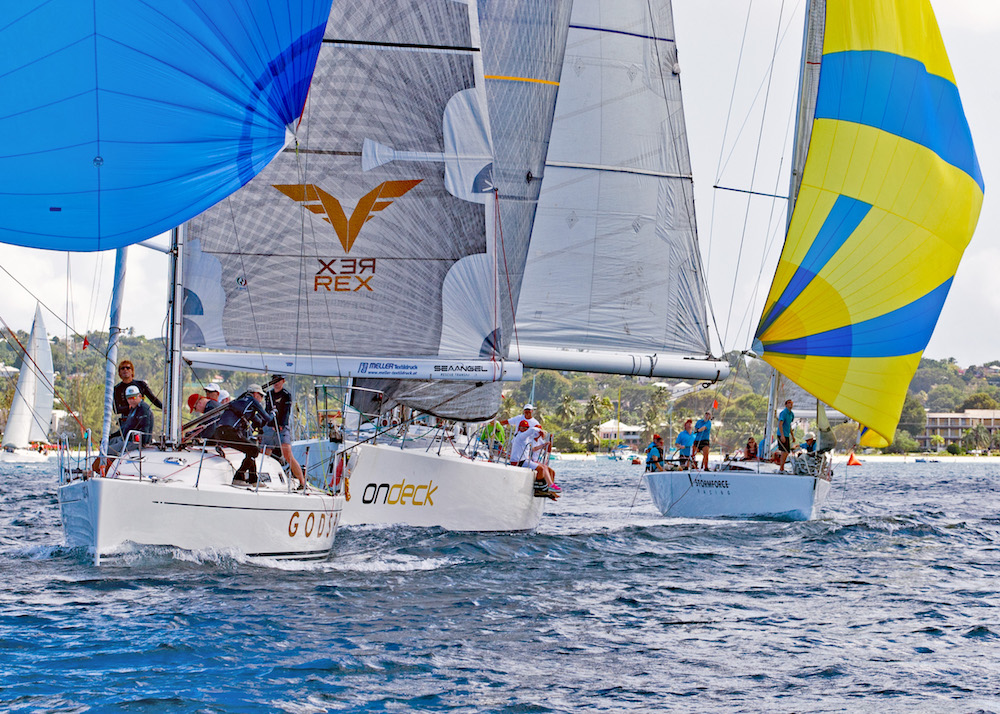 Bridgetown, Barbados (19 January, 2017): The final day of the Coastal Series at the 81st Mount Gay Round Barbados Regatta, organised by Barbados Cruising Club in association with Barbados Tourism Marketing Inc, and Mount Gay, concluded in spectacular style today with sunshine, a good working breeze up to 17-18kts, and a relatively flat sea. The 15nm course took the fleet out to the west, followed by a long windward leg to Oistins, not far off South Point.

The conditions made for a particularly exciting conclusion to the Series with results in some classes going down to the wire. Notably the Multihull class between Silver Bullet sailed byBryn Palmer (Barbados Cruising Club commodore), and Concise 12 (Diam 24) – Jack Trigger, Oliver Mellor, John Hunter-Hamilton, and Victoria Akhurst had one win apiece, going into the final, so it was all to play for today.

Trigger said: “We are happy, and have really enjoyed the competition over the last three days. We were fairly evenly matched in today’s conditions. We had quite a commanding position off the line but screwed up the lay line at the windward mark and had to do a cheeky double tack, which didn’t help us. However, the bottom reach to Trader was really nice for us because we just held the gennaker and managed to catch Silver Bullet. Once the breeze stabilized and increased up to 17-18kts we got ahead.”

Peter Lewis and his seasoned local team aboard Whistler (J/105), also clinched the series today with three straight wins. This super-tuned team demonstrated their impressive kite handling skills once again today so it wasn’t particularly surprising to see them take overall honours. Their closest rivals throughout the series were Doug Innes and team on Palpatine – Stormforce Coaching (Stimson 42), who finished second overall, and Clint Brooks and the local team on Conviction (TP52), who noticeably improved as the series progressed. Today they sailed well as a team and took second place, which left them one point behind Palpatine – Stormforce Coaching, and in third place overall.

Brooks commented: “Really pleased with how the team has gelled this week so we are happy with the results. It was a great warm up for the team in preparation to Saturday’s Round Barbados Race, which is what we are all here for.”

Another group of locals to make their mark on Coastal Series for the second year in a row, with three straight wins was Mark Hiorns and Priscilla Richardson and team on Tropic Bird (Hunter 35) in Non CSA class. Today they worked hard in the shifty conditions and beat fellow local sailor Bruce Robinson and team on Mandy (Hunter 29.5) on corrected time. A second place for Mandy today, lifted them to second place overall in the Series.

Interestingly Calvin Piggott and team on Paddington (J/24) sailed a storming first beat and led round the windward mark. With clear air, this team looked set to challenge for the win in the early stages but sailed a long way out to the right on first reach and were overhauled. They did however, manage to beat Jonathan Gittens on Shangri La (Morgan 41) who had an unusually bad day, finishing in fourth place and third overall.

Commenting on their win Tropic Bird’s skipper and helmsman/owner – Mark Hiorns and Priscilla Richardson – said: “The secret of our success was our new, reconditioned sails and a decent jib. We were able to point so much better, which made a big difference. Most of all though, our success was down to our fabulous crew; good, local professional sailors, who know us well and know the boat. Tactically, today we headed offshore on a good lift on the beat towards Oistins, while the others in the fleet stayed further inshore. I think that is what paid off for us today.”

With two wins already in the bag, it was no particular surprise to see Matt Barker’s Alfred Mylne 65 The Blue Peter claiming the overall series with another win. This left Mike Krimholtz and team on Dragon Magic (Dufour 385) in second place overall. As he stepped ashore this afternoon, Barker said: “We had another fabulous day on the water with absolutely cracking conditions, and the team loved it. We’ve had the same crew here for the last four years, so I imagine we’ll be back next year for more.”

Andy Budgen and his zippy little foiling Moth Nano Project seen flying around Carlisle Bay this week, finished the series in fine style with another win from class-mate, and local windsurfing hero Charles Trevor Hunte. Budgen who recorded a top speed today of 24.5kts, commented on today’s race: “It was fairly flat sea state, which favoured me and a fairly constant breeze of 15-20kt, but winning is very condition dependent. The best bit was the last, long reach when I sailed above 20kts all the way down towards the finish. It was quite amazing.”

Following the Round Barbados Race Skippers’ Briefing this evening, teams are now enjoying tonight’s party at Copacabana Beach Bar, just along the beach from Barbados Cruising Club. With a planned lay day tomorrow, crews have a chance to recuperate before the lay day Regatta Polo Match, which is taking place in the afternoon at Holders Polo Field, St James.

The 60nm Mount Gay Round Barbados Race is taking place on Saturday 21 January. There will be a staggered start commencing at 0700.