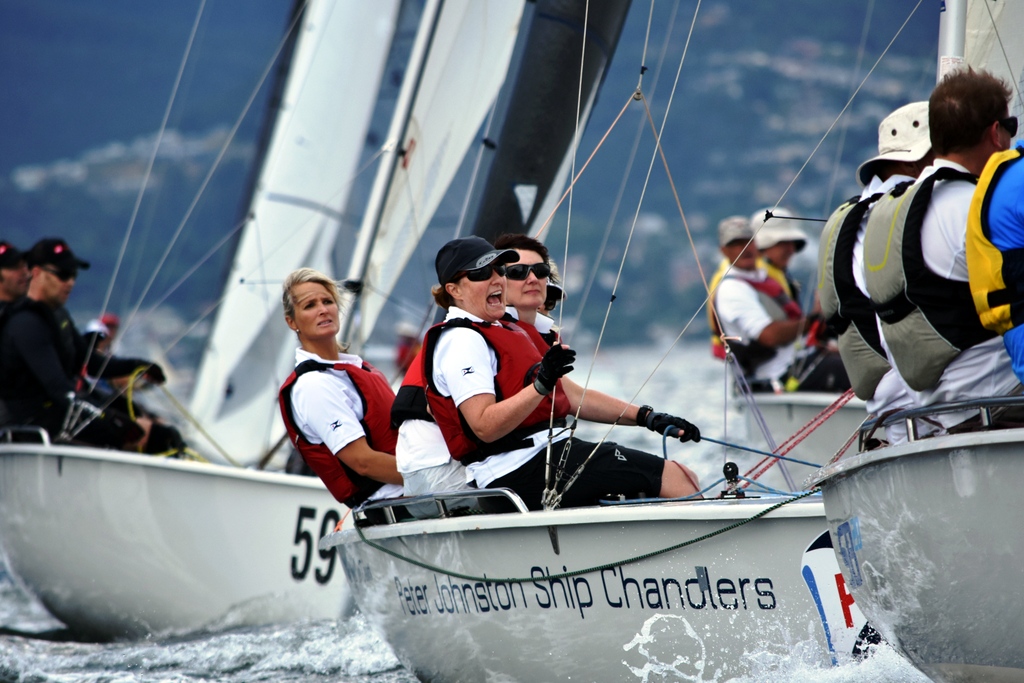 Felicity Allison at the helm of Cook Your Own Dinner in the SB20 worlds on the Derwent last summer. Photo Jane Austin.

Hobart sailor Felicity Allison celebrated Mother’s Day today with a win in the SB20 sports boat division of the Derwent Sailing Squadron’s Autumn Short-Handed Series, with her husband Will as crew, helming the rather appropriately named boat, Cook Your Own Dinner.

“I think Will will be cooking dinner tonight,” quipped the mother to two champion teenage sailors after the race, sailed in a light northerly breeze on the River Derwent.

“Will was a great crew and did what he was told!”  Felicity said.  “We had a ball!

Sailing two-up in the normally three to four-crewed SB20, Felicity and Will won on corrected time after finishing a close second across the line to SB20 past champion Nik Rogers, helming Wicked.  Third place went to Piste (Greg Rowlings).

“We had a great race with Nick Rogers, swapping first and second place in fleet.  He managed to get away from us on the last windward leg,” added Felicity who is vice commodore of Sandy Bay Sailing Club and a member of the Derwent Sailing Squadron.

Felicity sailed Cook Your Own Dinner in the SB20 worlds on the Derwent last January with an all women crew.  Her sailing career goes back to sailing as a junior crew in the International Cadet worlds, skills she has passed on to her sons, including with her younger son Hugo who was a winning world champion crew in 2016.

Another winning husband and wife crew in yesterday’s DSS/Quantum Sails Autumn Short-Handed Series was Steve and Trina Davidson who sailed their I550 sports boat Dynamo to its second win of the series in Division 4.

With a scorecard of 2-1-2-1, Dynamo holds a two-points lead from Rotary (Norman Brundle) in Division four with next Sunday the final race of the autumn. Rotary has placed 1-4-1-2 so far.

In the SB20 division, Piste (Greg Rowlings) has a one-point lead from Wicked (Nick Rogers) and Mind Games (Phil Reid).

In Division 2, Whoopdido (Tom McDonald) and Trouble (Mark Millhouse) are equal on points with one race to sail, yesterday’s winner being Temptation (Steve Harrison) which is sharing third in standings with 42 South (Mark Ballard).