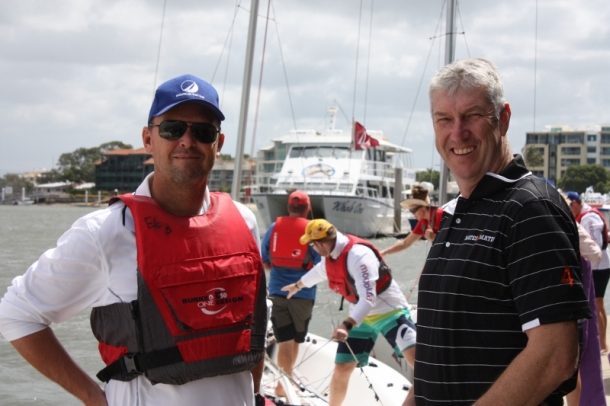 With its extensive network within the current and ex-serving Australian Defence Force members, Mates4Mates will add invaluable support to the delivery of the program including helping with recruitment and ongoing advice for those veterans that attend the Serve II Sail sessions.

Mates4Mates Physical Training and Rehab Manager Ricky Dumigan sees this sailing program as a good fit within the range of recovery programs already on offer through Mates4Mates. “The MYC is offering a basic participation program. The veterans will get to learn new skills and spend time socialising in a relaxed environment.

“It’s a program with the emphasis on having fun and getting outdoors. However, the club has structured the course so that anyone from the course can then go onto do more sailing either on a social level or aim to join in big boat sailing such as our Sailing Program on board Spirit of Mateship,” Dumigan said.

The MYC formally started the program this month after running a Pilot Program in October last year. After that test program four of the six participants chose to continue their sailing, joining the club for its weekly Wednesday afternoon race. MYC Commodore Gary Schulz said the outcome of the club’s Serve II Sail test program was heart-warming. “We wanted to provide a community benefit program that would also help the club to grow its participation base. The feedback from the Pilot Program sailors was outstanding. They had fun and felt comfortable enough to bring their family members to club for some social time and to meet us and show them the boats they were sailing on,” Schulz said.

The Serve II Sail program will be run several times during 2015. Between six and 12 participants will receive 12 hours of instruction by qualified instructors. Program mentor Billy Golbourn, an ex-British soldier who was injured in Afghanistan, will be on hand for the start of each session .

All training will be done on the river at Mooloolaba, just in front of The Wharf and on the club-owned  Elliott 6m keel boats. At the completion of the course, the veterans will receive a Keelboat Competent Crew certificate. For those that want to continue to sail, they will either be offered free 12-month membership of the MYC or be introduced to members of a sailing club near where they live.

Registrations for the next session in March, which runs on the 24th, 25th, 30th March and 1st April, are now open. For specific program information, go to http://goo.gl/ibIJMs