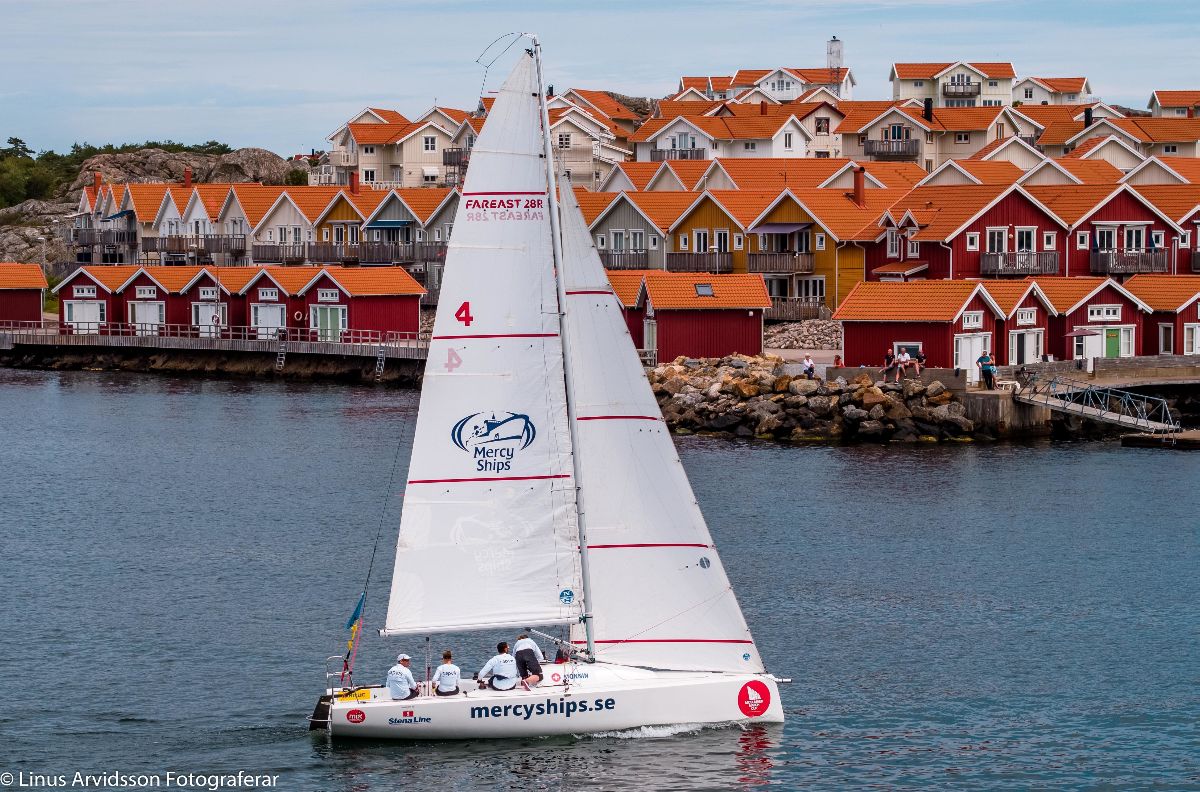 Eric Monnin and Albert Riele Swiss Team have won all their five matches during day one of Midsummer Match Cup. Credit: Linus Arvidsson

The inaugural edition of Midsummer Match Cup kicked off today with light winds on the Race Arena in Skärhamn. Eric Monnin (SUI) and his Albert Riele Swiss Team got the best start with 5-0 after day one.

Light and shifty winds caused a number of course changes and delays during the first day of racing in Skärhamn. After eight flights of the round robin we find Eric Monnin and Albert Riele Swiss Team at the top the top of the scoreboard with five wins.

”It’s a good start of course and it has been a day where everything worked out as we planned. Some of the matches were pretty easy because we had a good position from the start, and good crew work around the course. Now we only need to keep our momentum, and it’s nice not to stress about the results in the Round Robin. In the next stage of the regatta everyone knows that they need to reach a higher level,” says Eric Monnin.

Team GAC Pindar and Ian Williams, number one on the international open ranking, also won all their matches and ended the day with a win against Pauline Courtois, the highest ranked female match racing skipper in the world. Courtois and her Match in Pink by Normandie Elite Team have one win and two losses after day one.

“It’s not a good result but not that bad either. We just need to continue to improve our boat handling and our boat speed. It’s a difficult regatta with really strong teams but we are confident,” says Courtois and continues: ”We feel good and this is our second regatta with this team because we had the same set up in Bermuda earlier this spring. But it’s not my usual team and it’s very new for everyone in this regatta. The mixed team rule makes it very interesting.”

The eight best teams in the Round Robin qualify for the quarter-finals starting on Thursday. The Swedish teams have had a few ups and downs during the day but all of them still have a chance to get through to the next stage. Anna Östling and Team Wings took one of their two points against Nicklas Dackhammar and his Essiq Racing Team, the team which they have changed crew members with because of the mixed rule in the regatta.

“The mixed teams adds new dimension to the racing but we have handled it well. We have taken some important points, but the competition is really tough and we need to take a few more wins. We have our goal set on reaching the semi-finals,” says Anna Östling.

Anna Östling came very close to winning her match against Johnie Berntsson. Team Wings took a big lead during the first lap but Berntsson Sailing Team made an extraordinary recovery on the last leg and were able to pass just before the finish.

“I screwed up the start but I’m happy to have a team that never gives up. We really went for it during the last leg and of course it feels great to start the regatta with winning a match by less than a meter at the finish,” says Johnie Berntsson who only raced one match today.

The Round Robin continues tomorrow and the winner of the regatta is decided in the final on Saturday.