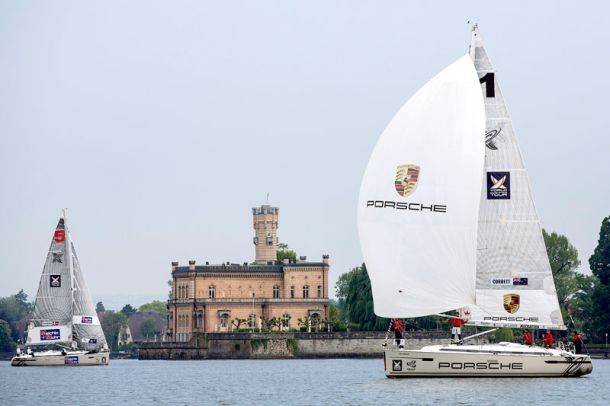 Langenargen, Germany (22nd May 2015): Swiss match racer Eric Monnin, SUI (Team Sailbox) and Croatian Tomislav Basic, CRO (TB Race Team) are tied at the top of the leaderboard after Day 2 of qualifying at Match Race Germany, the second World Championship stage of the 2015/16 World Match Racing Tour (WMRT). Both teams have posted seven wins out of their eight races, with six flights remaining in the qualifying rounds.

Holding third position behind Monnin and Basic is Polish match racer Przemyslaw Tarnacki, POL (Energa Yacht Racing Team) following a solid day on the water for the newly branded Energa Yacht Racing Team from Poland. After a week sailing the Catalina 37 yachts at the Congressional Cup in California, Tarnacki and his crew have had to adapt quickly to the heavier Bavaria 40 match racing yachts on Lake Constance.

“It was a long day for us with seven races but we won four so we’re pleased” commented Tarnacki. “Our tactics around the course were very good today. They are heavier boats here and the conditions today were not easy, we also know we need to improve our starts”

Lower down the field, Tino Ellegast (Team Ellegast) from Germany, Matt Jerwood (Redline Racing) and Great Britains Mark Lees (GBR Match Racing) have posted a 3-4 win/loss score which keeps them all in contention for a spot in the quarter-finals.

The remaining qualifying flights will be completed tomorrow with the highest scoring team advancing directly to the semi-finals. The next six teams will sail off in a compressed quarter-finals with the top three joining the semi-finals grid.

Meanwhile ashore, the Match Race Germany event village is the place to see and be seen this evening as the event hosts its annual Lederhosen and Dirndl party with traditional outfits aplenty.