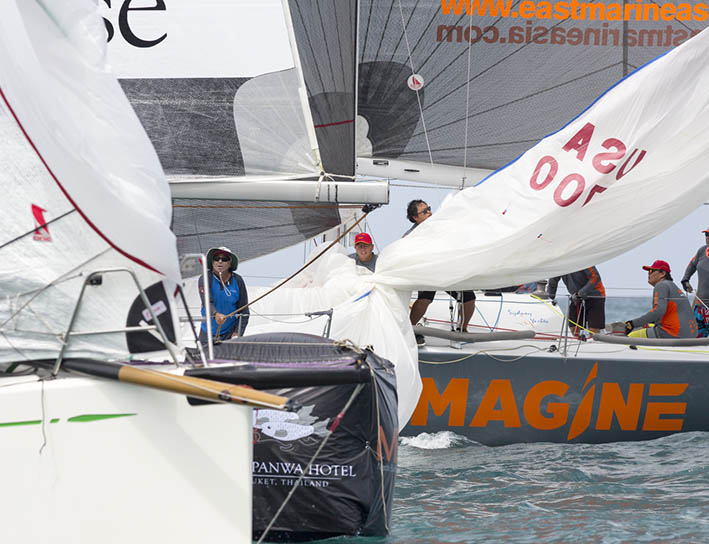 Phuket, Thailand: A busy day on the water produced excellent competition, close calls and racing incidents resulting in a busy evening for the Protest Committee onshore at the 2017 Cape Panwa Hotel Phuket Raceweek.

All protests were heard come this morning the sailors were happy to be back out on the water as a forecast-defying 8-10 knot breeze got the fleet underway on Day 2 of the Cape Panwa Hotel Phuket Raceweek 2017.

A single round the islands race for the cruising classes and a quick windward-leeward followed by a passage race for the racing classes, was the order of the day and PRO Simon James got them off clean and without delay.

While East Marine Emagine (AUS) won the first race of the IRC I series yesterday, it has since been a show of speed from the largest in the class, Ray Roberts' TP52 Team Hollywood (AUS) – two wins today brings their tally to four wins from five races, and puts them comfortably at the top of the standings.

Meanwhile, the '40'-footers are enjoying some close racing with the two Sydney 40's just having the edge. A second for Rerefine (AUS) in Race 1 and an OCS resulting in a sixth place finish in Race 2, moves them into third overall behind fellow Sydney 40 East Marine Emagine which finished the day with a 6,3 scoreline.

A rapidly improving Loco (SIN), however, is catching up and sits just one point off the podium. With the drop race now in play, and each of the second to fourth placed boats having a sixth on their card, every race place with make a difference over the final two days.

The IRC II fleet are enjoying some close racing and today it was a tight battle for top spot between Phoenix (DEN) and Sailescapes Farrgo Ladies (AUS). While Phoenix got the better in both races, just seconds separate the two on corrected time and the results could go either way. Sailescapes Farrgo Ladies currently trail Phoenix in the overall standings by three points.

The largest entry in the Cruising class, the 55-foot Swan Who Dares Wins (GBR), enjoyed stretching her legs today and after more than three hours of racing they claimed their first win of the series by a little over one minute from Lady Bubbly (AUS) with Beaux Esprits (AUS) taking third.

A rapid windward/leeward and another win for Asia Catamarans Hurricane (AUS). In Race 2, however, it was Thor (GBR) who finally knocked them off the top spot, sailing an excellent race over distance and correcting out more than three minutes ahead. Two third places for Phantom V today sees them reduce the deficit and now sit fourth overall, just one point behind Java.

Kicking up their heels, the Multihull Cruising class enjoyed some scenic racing around the southern islands and the ladies crew, led by sailing hot-shot Sean Jackson on DaVinci, continued where they left off yesterday with another win and now lead the standings from Rick Fielding's Mojo (AUS). Siesta did not start.

John Newnham and his crew on Twin Sharks (GBR) continued their winning ways in the Firefly 850 class adding two more wins today. With five wins from five they have built a four point buffer at the top and are sitting pretty at the series half-way mark.

The Japanese crew on Mil Grace return to the podium with a third place in Race 1 behind Blue Noze (GBR), and with it are now tied with Voodoo for third overall, while Blue Noze remain second following two second places today.

Java Racing (GBR) added two more wins to their tally and with that move to the top of the standings. Despite tangling with a mark on the course, Multihull Solutions H30 (AUS) managed to hold onto second place in Race 1 finishing just 12 seconds ahead of SuDu Blue (AUS) in third, going on to claim another second in Race 2 and keep the pressure on Java Racing.