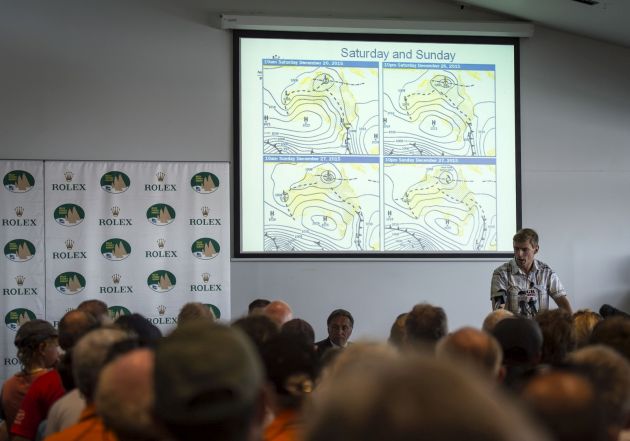 The latest forecast, issued on Boxing Day morning, has mixed messages for the crews in the 2015 Rolex Sydney Hobart Yacht Race.

Consistent with earlier forecasts, the start at 1pm will be in a freshening north-easter, meaning the yachts will beat to the Heads before popping kites for a fast run down the NSW coast.

Michael Logan, from the Bureau of Meteorology has told the sailors that they will start in a 15 knot nor-easter, which will build to around 20 knots. This evening a front will move through the fleet, a genuine southerly buster. The southerlies will reach 25 to 30 knots, and there will be thunderstorms, so some of the gusts will be well over 30 knots.

The Bureau has issued a gale warning: “For the leading boats, the further south they can get the better,” Logan says, “but for the back boats that looks like where the gales are and where the change will pack its strongest punch. And the boats furthest south will get the moderating breeze first.”

This seems to be the domain of the smaller boats each and every year.

The southerly winds will ease throughout Sunday, so that it will be quite light off the Tasmanian coast. And while there will be a second, weak front in the southern part of the track, winds will stay pretty light across the course.

Basically, how long that first southerly lasts, and what comes after it, will determine the race outcome.

“We just aren’t sure what will come after this front,” says Bruce Taylor, from his 40 foot Chutzpah. “It reminds me of 1984. A brute of a southerly and then a drifter for the rest of the race.

“We all have to get through the southerly in one piece and then the race will begin again off Eden.” Taylor hopes to take full advantage of his downwind rocket in the opening hours, but if it gets really light later, he thinks the Farr 40s will be very hard to beat, and he suspects this race could really suit the Sydney 38s.

“My Sydney 38 is in Melbourne unfortunately – and is a reminder of another year this happened.”

Matt Allen has opted for his Carkeek 60 Ichi Ban over his TP52, The 60 goes better uphill. He says that the forecast is evolving and there could be a bit more breeze down south when he needs it.

“The forecast this morning has opened a window for the 50 and 60 footers, and Rambler,” Allen, the president of Yachting Australia says.

As for the maxis, all eyes are on Comanche, and whether Wild Oats XI can haul her in when the winds go light. But David Witt, the sailing master on board Syd Fischer’s Ragamuffin 100, will have nothing of this being a two horse race.

“Everyone has written us off, but they are in for a shock. We are going to surprise everyone.”

The last word goes to last year’s winner, Wild Rose’s owner/skipper Roger Hickman. “I don’t know. The maxis could get away from us in the light winds, but every corner has a chance this year.

“Win your Division and beat a couple of other boats, and see what happens.”