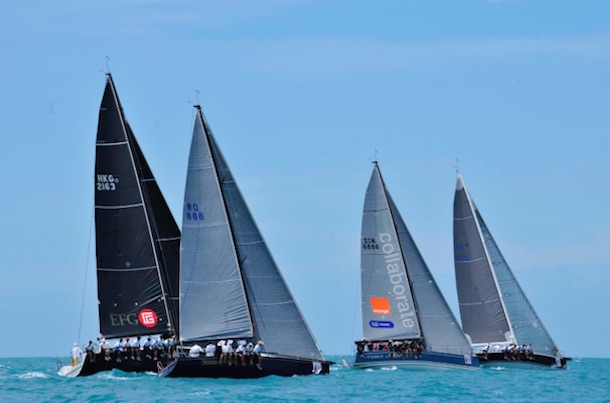 Following a lively opening to the 14th Samui Regatta last night at Zico's Brazilian Grill & Bar, it was down to the serious stuff of racing today and with 30 knots blowing at breakfast time, the signs were good.

By the time the fleet was out at the startline and IRC Zero into sequence, the winds had dropped to a steady 12 knots, enough to get all classes off on time and to allow Race Officer Ross Chisholm to send the IRC Two fleet south on a passage race.

While they were racing along Samui's east coast, IRC Zero and IRC One were on a fast windward/leeward course – their first race of the Series. Getting a good start, Frank Pong's Jelik (HKG) never looked back completing the two-laps in 53 minutes, stretching out a six minute on-the-water lead in the process, and converting that to a one minute win on corrected time. First bullet on the scoreboard for Jelik.

Racing on his recently-acquired Windsikher II (SIN) this year is Regatta regular, Sarab Singh. The former HiFi, with a number of the ex-crew onboard, made their mark immediately mixing it up at the front of the pack. The moderate conditions suited the 52-footer and in Windsikher II's first competitive outing they secured a second place ahead of the two TP52s of Sam Chan (HKG) and Peter Ahern (AUS) who battled it out for third and fourth – Sam Chan wining the tussle.

It was all change in Race 2, a passage south, and while Jelik again claimed line honours their lead wasn't enough to correct out for the win. A wind shift at the top mark saw most of the fleet struggle to make it, but on the run back the 52-footers out-sailed Jelik on time to place above on corrected time and relegate Jelik to fourth.

There were some nervous faces onboard Windsikher II on the downwind run to the finish. Flying their lightest spinnaker as the breeze picked up, Windsikher II managed to hold it together to take the win on corrected time while a blow-out for Oi! dropped them to third behind FreeFire.

Results in IRC One this week will determine the winner of the 2014/15 AsianYachting Grand Prix Skipper and Yacht of the Year as those with a chance to dethrone Paul Winklemann (Skipper of the Year current leader) – Nick Burns/ Fred Kinmonth (EFG Mandrake) and Bill Bremner (Foxy Lady VI) – are competing in Samui while Paul Winklemann is absent from the Regatta this year. First bullet of the Series went to the skipper duo on EFG Mandrake (HKG) who corrected out 20 seconds ahead of Roland Dane's Jessandra II (RQ). Bill Bremner and his Foxy Lady VI (SIN) had to settle for third, who after pulling off a remarkable string of wins in Samui last year to claim the AYGP title will be looking to bounce back quickly and get their final assault for back-to-back titles, back on track.

Jessandra II went one better in the second race of the day, enjoying the distance to take the win by over a minute on corrected time and lead the class standings at the end of Day 1. Foxy Lady VI also improved, finishing second in the race and edging out line honours winner EFG Mandrake.

Some last minute changes to entries in the Premier and IRC Two classes see the two now combined into a single IRC Two class that is racing under IRC handicap. The class will also have two divisional splits: IRC Two (NHC) and Premier (NHC), both of which will be second-scored using the NHC performance handicap system.

Under IRC Handicap, El Coyote (AUS) enjoyed the long distance race and out-sailed the rest to take the win from Siren (HKG) on corrected time by a little over one minute after over four hours of racing.

Scored under NHC, the all-Thai crew on Windstar took the honours in “IRC Two (NHC)” while El Coyote topped out “Premier (NHC)”.