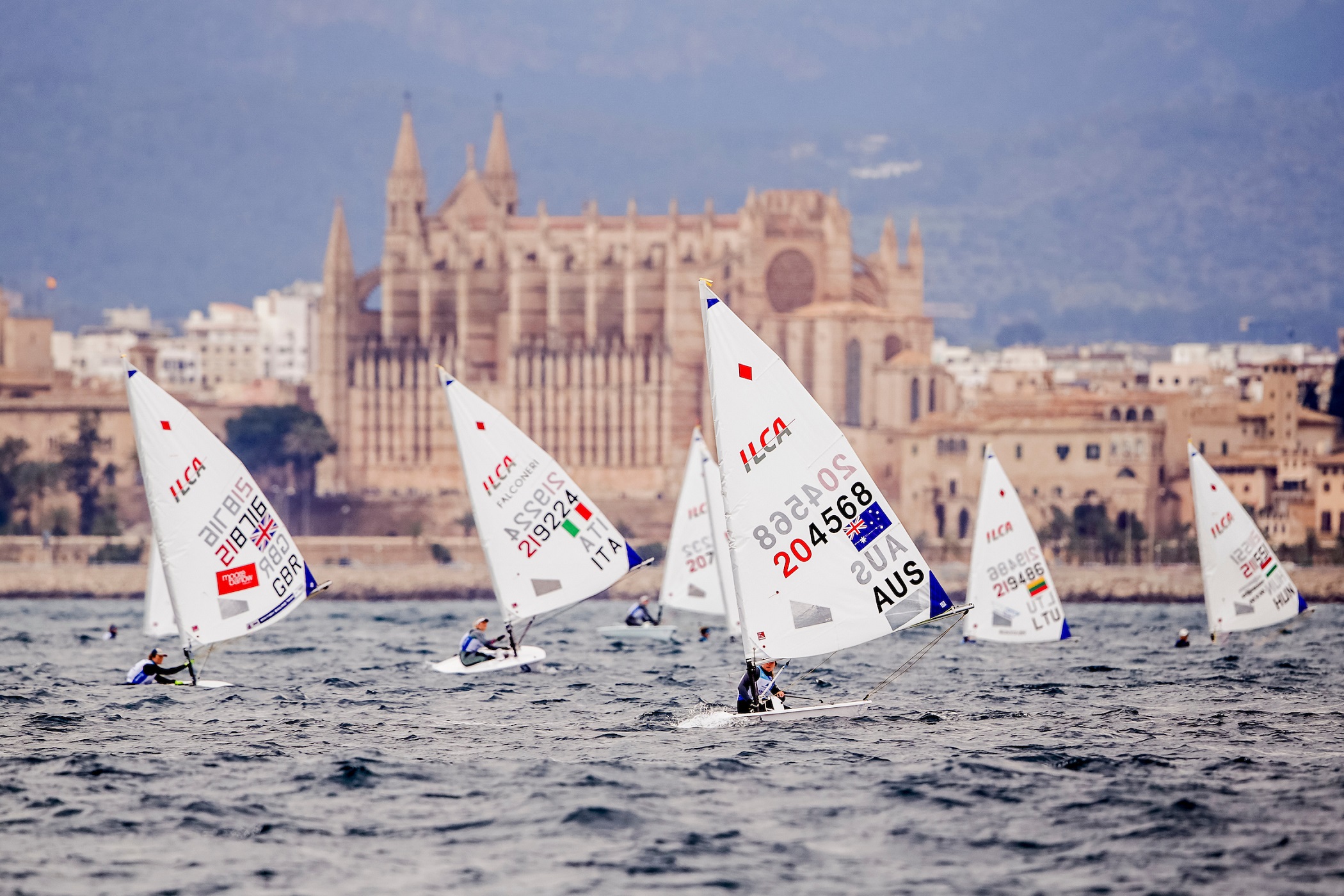 Shifty winds on Day 3 of the Princess Sofia Trophy produced a mixed bag of results for the Australian Sailing Team (AST) and Australian Sailing Squad (ASS) athletes competing in Palma, the best results coming from the ILCA 6 and ILCA 7 classes, with big moves up the leaderboard for Matt Wearn and Zoe Thomson.

Tokyo gold medallist, Matt Wearn, shot up to eighth place overall in the ILCA 7 after placing second in both races, making him best placed of the Australians, following a delay in racing as officials waited for consistent winds to settle on all courses.

“We had to wait around this morning as it was raining and there wasn’t enough wind. It wasn’t an easy job for race officers, but they did the right thing keeping us ashore until the wind settled,” the Perth sailor said.

“We had a couple of interesting and tricky races. It was so shifty, we had almost 90 degree shifts in both races, but they were fair races. It was hard to predict what was going on. A hard day of sailing, but I’m back in the hunt.”

Thomson said, “We had a really long day. The wind was very shifty and we were racing under the city. It made it hard for race management to set courses.

“It was an easy day to have big numbers,” she said. All but three in the top 15 (Ainsworth was one of the three) had a throw away race or were Black Flagged. It was the case across all classes.

“I had a good first race, but I got caught up at the top mark in the second race. It was cold again and then the sun came out and made the wind even more shifty.”

Of the competition within the squad, the West Australian sailor said: “The four of us (Thomson, Ainsworth, Olympian Mara Stransky and Casey Imeneo) do a lot of training together in Australia, so it’s good to race internationally again and test ourselves individually against the rest of the world.

Chris Charlwood and Amelia Catt moved to the top of the Australian results in the 470 Mixed and are 16th overall. There was disappointment for Nia Jerwood and Conor Nicholas who dropped off the podium down to 18th place, following a 29th and a Black Flag.

Lisa Darmanin, cleared to race after a bout of COVID, went on the water with Jake Liddell, whose usual team mate is Lucy Copeland. Copeland and Darmanin’s customary skipper, Jason Waterhouse, are yet to be cleared from the COVID protocols.

“I was cleared to compete, so it was good to get on the water with Jake. I was keen to get out there and to make sure Jake could get on the water too. It was fun. This is our first time sailing together and it was straight into racing. We just made it to the start,” Darmanin said.

“You get so used to sailing with your usual team mate, so to sail with a new person isn’t easy. It becomes about intuition and trust sailing with someone new,” she said after the pair claimed 12th place in the first race of the day.

“Jase (Waterhouse) and I should finally be back on the water together tomorrow. As we only did two races today, they’ll probably run four tomorrow. We’re not going to push it. We just want to just make sure we learn as much as we can before Marseilles in a week’s time,” the Rio Olympic silver medallist ended.

Olivia Price, the London Games 2012 silver medallist in the Women’s Match Racing campaigned in the 49erFX for the Rio Games but missed selection. She has Evie Haseldine sailing alongside her for this campaign and they are in good shape in 32nd overall.

“It’s great to see how the class has evolved and it’s great to be back racing on the international circuit after six years away from it,” Price commented.

“We came into this event with the goal of seeing where we are on the international scene. Evie and I teamed up together less than six months ago. The work really began three months ago when Victor Paya (new 49erFX coach) came into the picture. It’s a pretty good team environment.

“Evie’s 18, I’ve known her since she was born. She’s gone through the Youth program in the Nacra. It’s good to see so many young sailors come up through these programs.”

A full schedule of planned races was not possible in some classes due to the late start, so officials are hoping to catch up tomorrow (Thursday) local time. The Olympic classes regatta concludes on Saturday 9 April local time with the Finals and Medal races.