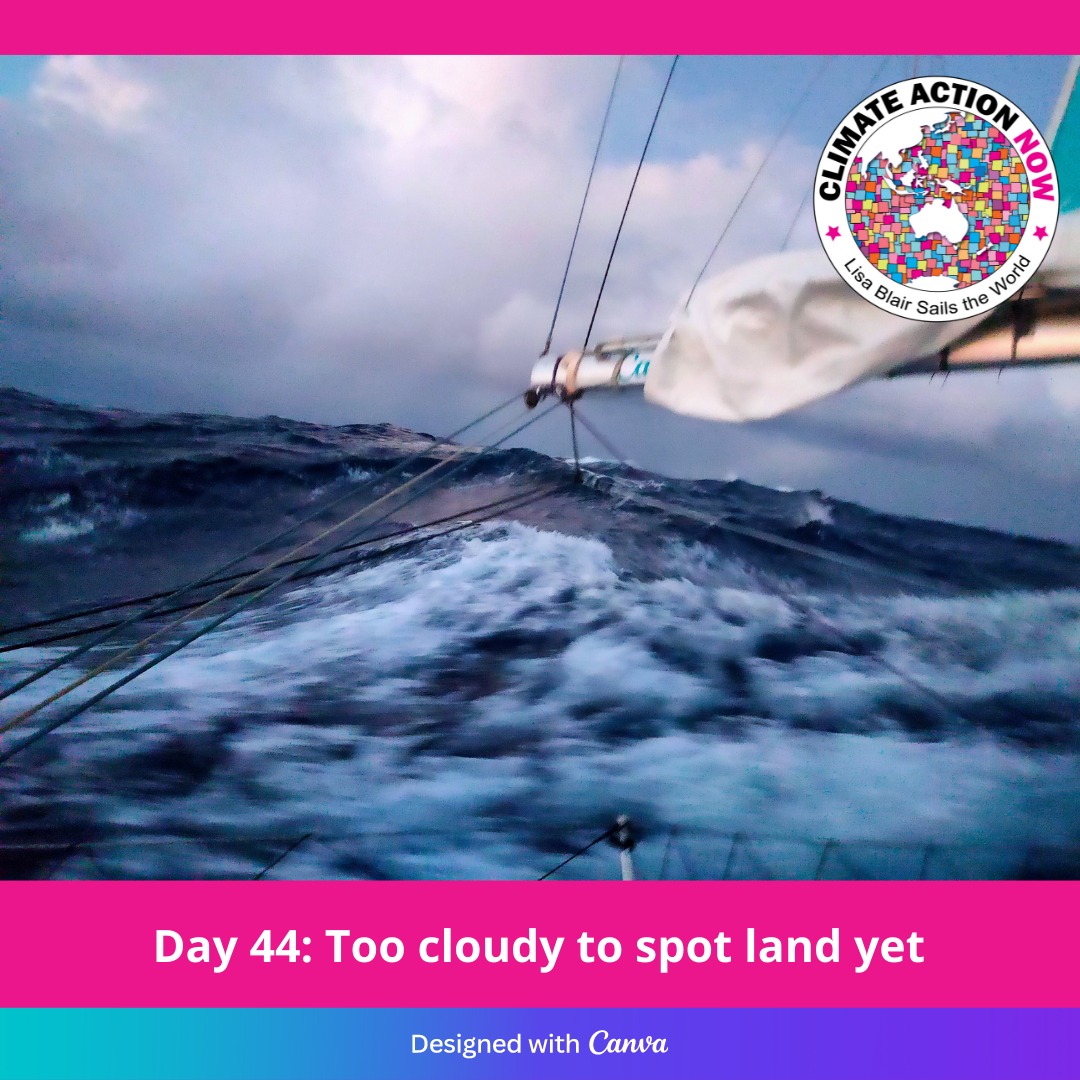 In her latest blog post, Blair endures frustrating winds and keeps an eye on rocky outcroppings ahead of Cape Horn rounding.

With the safe rounding of Cape Horn becoming my primary focus I set about to try to get as much sleep as possible before getting too close to land. Once I was close, I would need to be up until I was safely clear again on the other side. So, while I didn’t go to bed early, only making it to bed at 9am I did stay all day in bed and ended up getting up to do a sail change at 5pm and see if I could spot land.

The conditions have been quite difficult because I am still getting squalls that are giving me 30 knot or more winds and then I am getting these really annoying lulls, where the winds are dropping right out to 15 knots. It’s pull-your-hair our frustrating, because my speed is dropping down to 5 knots in the lulls and when the squalls hit we are rounding up out of control.

Just before I went to bed this morning, I decided to shake out the reef to the 1st reef and put a little of the No 2 Jib out to help us along, but the whole time I was trying to sleep we kept getting round ups, or we would start rolling from side to side so badly because we were so under powered in the still five metre swells. Well, the alarms were tripping every 20 minutes or so and we just kept rounding up.

Eventually I gave up and went on deck to see how things looked.  We were surrounded by squalls and there was too much cloud cover to see land. I figured that those conditions are going to be around for a while longer yet and put the second reef back in the mainsail.

We calmed down immediately, and everything seemed to settle. I went below, and made some porridge, before aiming to get another sleep in. Not 10 minutes later and all the winds just up and disappeared. We started to get 12 knots- 15 knots and with two reefs in the main sail and the no 2 jib only half out we were not getting anywhere quickly.

I was also aware that the high-pressure system coming up directly behind me had absolutely no wind in it and I felt that I might be on the edge of it catching me. I downloaded a grib file, which is a form of weather file and had a look. Sure enough, I was right on the edge between 25 knots and 10 knots and if I didn’t hurry up, I was going to get stuck with all that light wind. I went back on deck and shook out the 2nd reef and hoisted the mainsail up to the 1st reef again and went back below.

I attempted to go for some more sleep. The winds remained light for another hour before we started to get those 30 knots winds again.  It was now close to 11pm, but before I changed the sails over and put the reef back in the mainsail, I wanted to make sure that I had firmly sailed into the area with wind. I wanted to sail well away from those light winds.

After an hour of roundups, I finally put the 2nd reef in the mainsail before going back below. It was time for a micro plastic sample change, and I had some islands coming up that I needed to make sure to sail around. I did the sample change and made a favourite meal of mine, the Bare Burrito, and settled in to watch the navigation.

We were finally starting to make some good progress speed wise and were still holding a 100 T heading. I wanted to cross over onto the shelf and start making a direct line for Cape Horn after I cleared this little cluster of rocky outcroppings or little islands. There were just three little dots on the chart. On my current course I was well clear of them so I wasn’t too concerned. I generally do most of my planning on paper charts and cross reference the data of the paper chart with the electronic one before using the electronic chart for open water navigation and this time it was no different.

The problem that can occur with electronic navigation isn’t really that the charts are incorrect, although they can be out of date. It’s often that the chart is right, the GPS position is right but the overlay of the two can have an error. I have seen these errors as great as 10nm in remote regions, so I always use my electronic chart as a secondary means of navigation and use paper charts or other means to cross reference your position, like radar, or fixes.

Well, as I was getting closer to my islands I began to notice that my error of the overlay between the GPS and electronic chart was significant, because instead of passing safely below my islands I was sailing directly towards them. The point from the radar had them 5nm off my bow, I went to see if I could see them outside, but it was pitch black and there was nothing.  I altered course and sailed a few miles south of them before straightening up again.

I worked out that the error is at 5nm, so I will be watching the radar closely when approaching Cape Horn. The radar is one of the most accurate ways to find the edge of land, because it is literally pinging a signal off the land. While it takes a little practice to interrupt the images, you can always clearly see the edge of the land. I always use the radar to confirm my digital charts.

So I dodged my islands and altered my course to be mostly 090T but now the winds seem to want to blow in from the WSW rather than the SW, making it a hard angle to hold. It means I am sailing almost directly down wind and poor Climate Action Now doesn’t like that too much. Cape Horn is roughly 50 nm away so I should be passing it sometime around 10-12 tomorrow in the day light, so I am looking forward to being able to see land finally.  So far it has been 44 days with no sight of land or another ship which is pretty amazing.

So for now I am going to sign off and try for one last sleep before I am up all day tomorrow but before I go I would like to take a moment to thank the following degree sponsors.

071 West – The Red Couch Counselings and Psychology Clinic – Thanks to Elke Kellis for your wonderful support.

069 West – King Bimmi – Thanks Scott Bimrose for being an awesome cousin and always supporting my adventures.

068 West – Oz Resort – In memory of Captain Harry Major – Thanks Jacqueline Major for always being such a great supporter.

*Note from Mum – Lisa has successfully rounded cape horn but it looks like we will have to wait for the details. Ahhhhh