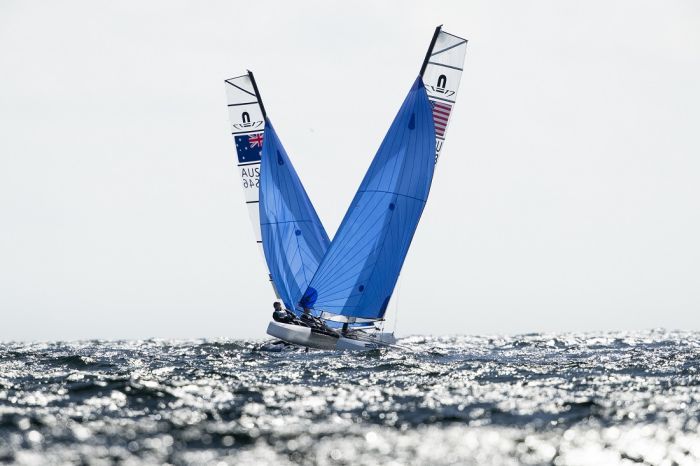 Diverse conditions on Day 4 of the 49er, 49erFX and Nacra 17 European Championships played havoc with the Australian Sailing Team and others in Weymouth, changing up scores across the board that only the chosen few escaped to stay on top.

The Qualifying round over, all three classes have been split into Gold and Silver fleets as the competition heads towards the Medal Race for the best 10 in each class. Only the top 25 placegetters made it into the 49er and Nacra 17 Gold fleets, but there are 29 in the 49erFX, due to an administration error.

Both Australian Nacra teams made it through to the Gold fleet, as did all three 49erFX teams. However, only Will and Sam Phillips of the five 49er crews made the cut, leaving the rest to battle it out in the Silver fleet.

An up and down day on the Nacra 17 racetrack for NSW Central Coast brother and sister, Nathan and Haylee Outteridge. Despite 5,19,19 results, they have picked up one place in the overall standings to 14th overall, as a number of those above them also posted a high score or two.

NSW’s Paul Darmanin and Lucy Copeland did not fare as well, dropping two places down to 23rd overall following 27,2,15 results.

Nacra 17 coach and double Olympic Tornado silver medallist, Darren Bundock, described the day as: “A bit like Groundhog Day, although the first race was around 7 to 8 knots. The next two were back to 13-14 knots, similar to yesterday, and still wavy. There were large shifts. You had to play them, as it was quite easy to get out of phase if you didn’t,” he said.

“Nathan and Haylee sailed well in the lighter first race. They’re struggling downwind in the pressured up winds, but are going well upwind.

“Paul and Lucy got caught out in the first race. They were on the left side of the course, when breeze was from the right, so they struggled to get back. In the last race, the top of their spinnaker halyard broke and cost them places,” Bundock explained.

In the 49erFX, Natasha Bryant and Annie Wilmot fell foul of a UFD (a premature start) in Race 10, their second for the series. They have lodged a protest against this result, but the UFD stood at the time of writing.

The two NSW athletes were able to re-focus to finish sixth in Race 11, only to drop to 21st in Race 12. Despite these results, they have managed to retain 12th place overall.

Tess Lloyd and Jaime Ryan also produced a mixed bag of results, but held their 17th position on the leaderboard after scoring 15,27,6. Amelia Stabback and Caitlin Elks started the day in 25th place, but ended it in 26th, after three double digit finishes.

The 49er Silver fleet put three races to bed well before the Gold fleet. Four Australian Sailing Squad pairs are in the Silver fleet, with Thomas Needham and Joel Turner best placed after finishing the day with a second place in Race 13 for 34th overall.

West Australian brothers David and Lachy Gilmour are now 37th overall, Jim Colley and Shaun Connor moved up a place to 38th, helped by seventh place in Race 11, while Kurt Hansen and Simon Hoffman have dropped to 47th overall.

Will and Sam Phillips who have been sailing well all week, toppled from fifth down to 14th in the Gold fleet, unable to place better than 20th today.

Euan McNicol, the 49er coach, explained: “You make a few little errors and you get punished. It was a fairly tough day in some high quality racing.”

Gold and Silver fleet racing continues ahead of the Medal Race for the top ten in each of the classes on Sunday 19 May local time.

The Australians in Weymouth are facing the world’s best as they strive towards selection to the 2020 Tokyo Olympic Games.