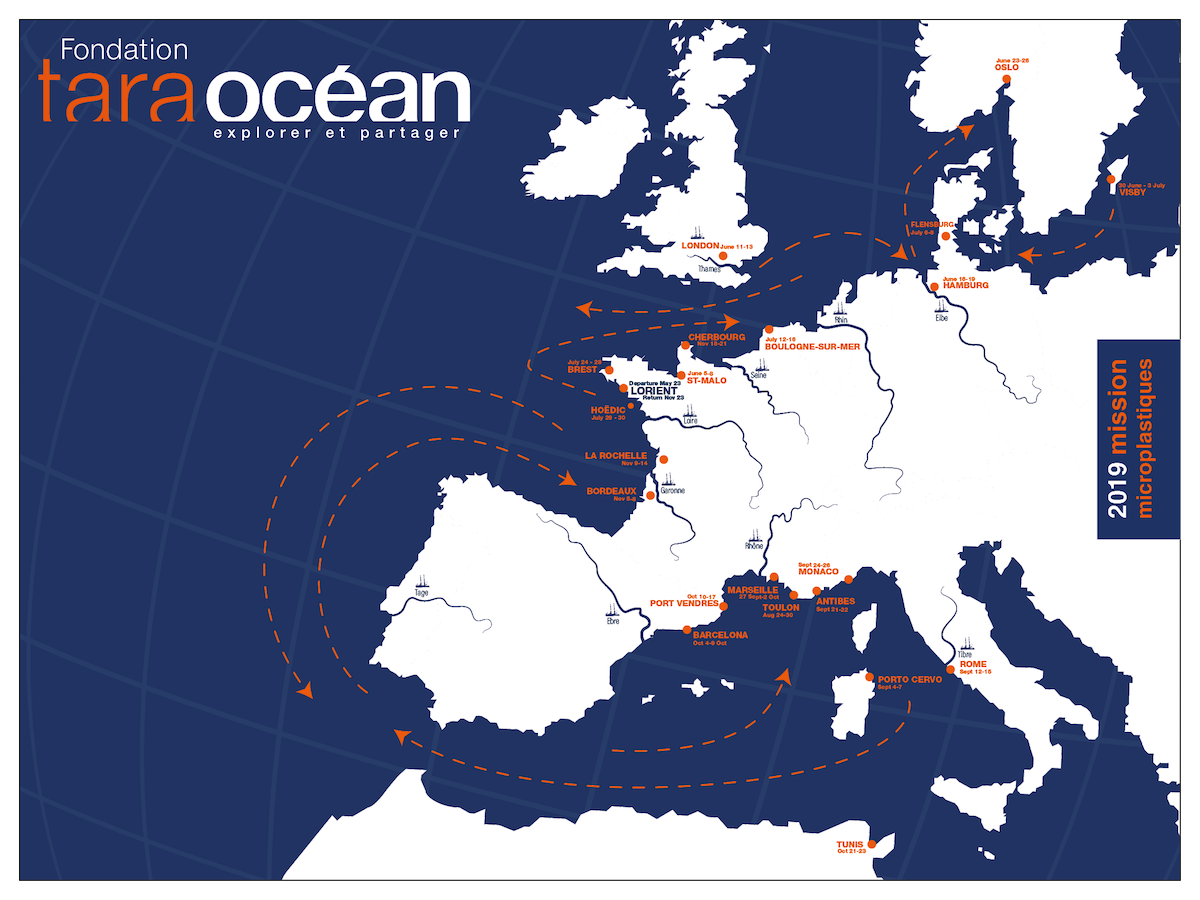 Where does plastic waste originate? How does it arrive in the Ocean? Where should we concentrate our efforts to stop the flow of this waste? What impacts do plastics have on marine biodiversity?

Recent estimates find that 80% of plastic waste found at sea originates on land. The Tara Ocean Foundation and the European Molecular Biology Laboratory (EMBL) have been involved in this research since 2010. Now it is urgent to explore and identify the flux of plastic waste from land to sea in order to stop it.

The upcoming Mission Microplastics 2019 — with the CNRS in charge of scientific coordination —will take the schooner Tara through several regions in Europe for six months, exploring 10 major European rivers. The journey will begin on May 23, 2019 in Lorient (Morbihan), Tara’s home port.

A new chapter of research about plastic at sea aboard Tara

During several expeditions since 2010, the schooner collected microplastics (from 0.2 to < 5mm in diameter) in her nets. The evidence is clear: microplastics are ubiquitous throughout the oceans. In 2014 we focused on this pollution in the Mediterranean Sea. Then in 2017 we discovered an important zone of plastic accumulation in the Arctic Ocean, and in 2018 we identified the biodiversity associated with microplastics in the north Pacific vortex. Now Tara and her partners will identify the sources, predict their outcome, and assess the impact of plastics from the land to the sea.

Microplastics, the most problematic fragments

Many studies in Europe and around the world have already made it possible to characterize the flow of waste in various aquatic environments — seawater, coastal waters, rivers, transitional waters such as estuaries and lagoons. But most often these studies have concentrated on the larger plastic fragments— “macro-debris” (> 2 cm). Microplastics are the result of the degradation of macro-debris. These tiny fragments have numerous interactions with marine organisms: they can disperse potentially invasive species and pathogens attached to plastics, and accumulate toxic products and endocrine disruptors which then enter the food chain, etc.

Rain running down roads and gutters into lakes, water flowing in streams and rivers— are vectors of the plastic waste produced by everyone which eventually winds up in the ocean. Tara will stay close to the coasts, conducting this new investigation to determine the exact origin on land of the plastics found at sea.

An interdisciplinary team of about 40 scientists — marine biologists, ecotoxicologists, oceanographers, mathematicians/modelers, chemists and physicists — will lead this mission, working together to accomplish two major goals:

Sampling is planned at the mouth of 10 major rivers in Europe: the Thames (England); the Elbe and Rhine (Germany); the Seine, Loire, Garonne and Rhone (France); the Tagus (Portugal); the Ebro (Spain); the Tiber (Italy).

Samples of microplastics (1 – 5mm), micro-metric particles (1-1000 μm) and nano- plastics (1-999 nm) will be collected at the surface and in the water column. These microplastics will provide clues and evidence to identify their origin, find the foci of dispersion (according to their size and chemical nature), and target the densest concentrations of microplastics in order to take action at the source.

Better understand the toxicity of microplastics

Sampling at sea, in estuaries and in rivers will allow us to study the impact of plastics on biodiversity and their transfer into the food chain. Plastics fragments are like rafts that can transport a wide diversity of species over long distances and durably disrupt ecosystems. They can also accumulate in the food chain and end up on our plates.

Plastics contain additives (including endocrine disruptors) that can be absorbed by the tissues of animals that swallow them. This research will contribute to identifying the most toxic plastics according to their composition, in order to eliminate them as a priority from our consumption.

Plastic at sea: the solutions are on land!

It would be impossible to collect the enormous quantity of microplastics at sea. The most effective solution is to stop the flow of waste coming from the continents.

Better assessing the sources of microplastics and their fate at sea is a scientific and political challenge. New knowledge will allow us to combat the pollution more effectively while continuing to advance recycling, reduction, reuse and repair, and ultimately contributing to the implementation of a circular economy.