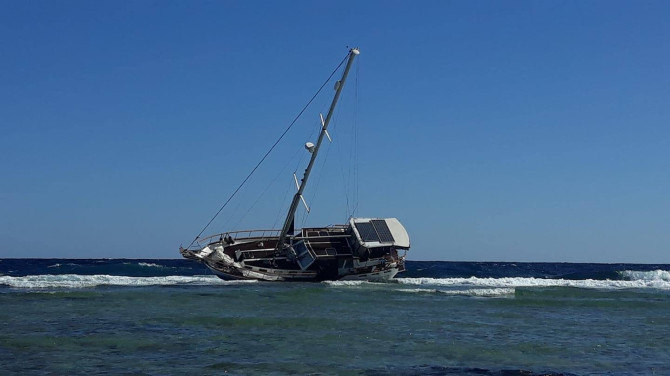 Colin's empty boat was discovered weeks after he picked it up. Photo The Scottish Sun.

The family of a wealthy Scottish hotelier sailing solo across the world has appealed for help after his boat was found empty on a Red Sea reef.

Colin Finnie, 67, last contacted his wife on December 7 as his Korean-flagged boat Simba was 300 miles from a stopover at an international marina at the Egypt’s Port Ghalib as he attempted to sail from Australia to Britain. He reported that he had been in storms and was low on fuel.

The 44-foot boat was found run aground six days later with no sign of Mr Finnie.

His wife Rosie Kinkead appealed for help via Facebook for anyone who might know his fate. “I know it’s a long shot but I am trying everything,” she wrote.

An update on the site earlier this week said: “Out of respect, and at the specific request of the family, Boatwatch.org has not been providing additional information on the website.

“If anyone has pertinent information, or may be able to help or assist the family in any way, please contact Boat Watch at Eddie@Boatwatch.org and we will forward on the information.”

It added: “Thanks to all who have contributed information to the family.”