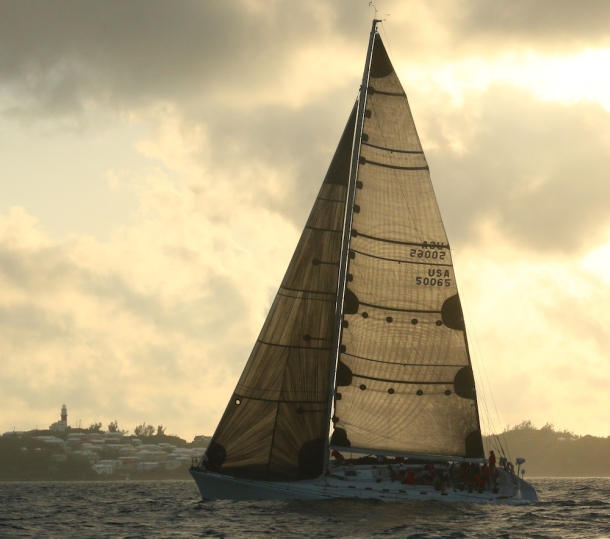 ‘Mischievous’ grabbed the line honors in the 2015 Marion Bermuda Race with a splendid performance. She crossed the finish line at St. David’s Lighthouse Bermuda during the twilight Lighthouse committee cocktail party at the finish tower on Monday evening at 6:42 EDT. ‘Mischievous’ is a Meriten 65 sailed by cadets from the Massachusetts Maritime Academy and skippered by Charles Cahill. Dozens of spectators cheered her as she crossed between the buoys that set the boundaries of the bearing from the lighthouse.

As of 1800hrs ADT the lowest, slowest handicapped boat in Class C, ‘Silhouette', finished first in the class C and is now in first place in the race for corrected time winner. She is a classic looking Cherubini 44 skippered by David Caso. She will certainly finish first in Class C, but positions can change as the Class D boats finish. Overall handicap winners may not be confirmed till the slower boats finish. Deciding the overall winner is a waiting game.

Silhouette won the Founders Trophy in 2007.

‘Spirit of Bermuda’, the Bermuda Sloop Foundation’s sail training vessel chartered by Jim Butterfield for an employee team building adventure, had a strong fourth for line honors and first in the Classic Division compared to disappointing performance in past Bermuda Races.

The 118-foot Bermuda sloop replica was standing third for line honors position, but got nipped at the line by ‘Lucy Georgina’, a modern Xp44 that could out point ‘Spirit’ when they had to tack to the finish. For the past two days ‘Spirit' was flying on a reach right down the rhumb line sailing at over 10kts VMG for her best finish ever in a Bermuda Race.

“Excellent… Great!” said George Fergusson, the Governor of Bermuda, at the end of his first ocean race to Bermuda. “The Gulf Stream was a bit damp with waves coming from various directions. The highest wind was 39 kts. We took the mizzen [a small sail in the back of the 4-sail rig] down and put reefs in the mainsail [the biggest sail] to reduce its size. When we took the mizzen down, the boat got more upright without reducing speed. We were doing 11 kts in the Gulf Stream. We had two beautiful days from the Gulf Stream to St. David's.”

When asked if he would like to do the race again, Governor Fergusson quipped, “ Probably not tomorrow, but one day I’d like to.”

Chip Johns’ Baltic 58 ‘Margalo’ now stands first in Class A on corrected time preliminary data. The J46 ‘Ariel’ has moved into second and ‘Defiance’ the Swan 56 is third.

The US Naval Academy boats are dominating Class B. They stand 2-3-4 in the race on overall corrected times in preliminary reports. In spite of being the lowest, slowest handicapped boat in Class B, ‘Swift’ NA11 skippered by Kyle Briggs punched her way into the preliminary corrected time lead for the Founders Trophy, but then fell to second at the 1800hr report when ‘Silhouette'' finished first in Class C.

Currently standing second in Class C is ‘Black Mallard’ a Cardinal 46 skippered by Tracy Day McRoberts, the top female skipper in the race. ‘Attitude’, a Beneteau 423 skippered by Shawn Dahlen, is currently third.

The smallest boats, those in Class D, are led by ‘TI’ an Alden Mistral 36 sailed by Gregg Marston. Following in second is ‘Trust Me’ the Moody 47 skippered by Jeff Dowling. In third is ‘Free Spirit’ sailed by Thomas Stokes.

All of the positions are preliminary based on handicap times. They are certainly subject to change over the final hours sailing to Bermuda.

Two boats from Class A have retired. ‘Kiva’ an Aerodyne 47 ripped her mainsail and ‘Free Range Chicken’ had a rigging failure. Both returned to the US. ‘Legacy V’ from Class B retired after one of her crew, Bill Fasnacht, died of natural causes. His crewmates could not revive him after an hour of CPR. ‘Legacy V’ has returned to Connecticut.

‘Swell’, Class C, did not start and Class D entry ‘Is Fearr Cara’ retired earlier and returned to Maine while classmate 'Shuang Hsi' is motoring in to Bermuda.

On Tuesday, winds on the approach to Bermuda, where most of the fleet should be now, are predicted to be westerly allowing the yachts to sail on a reach to the finish.