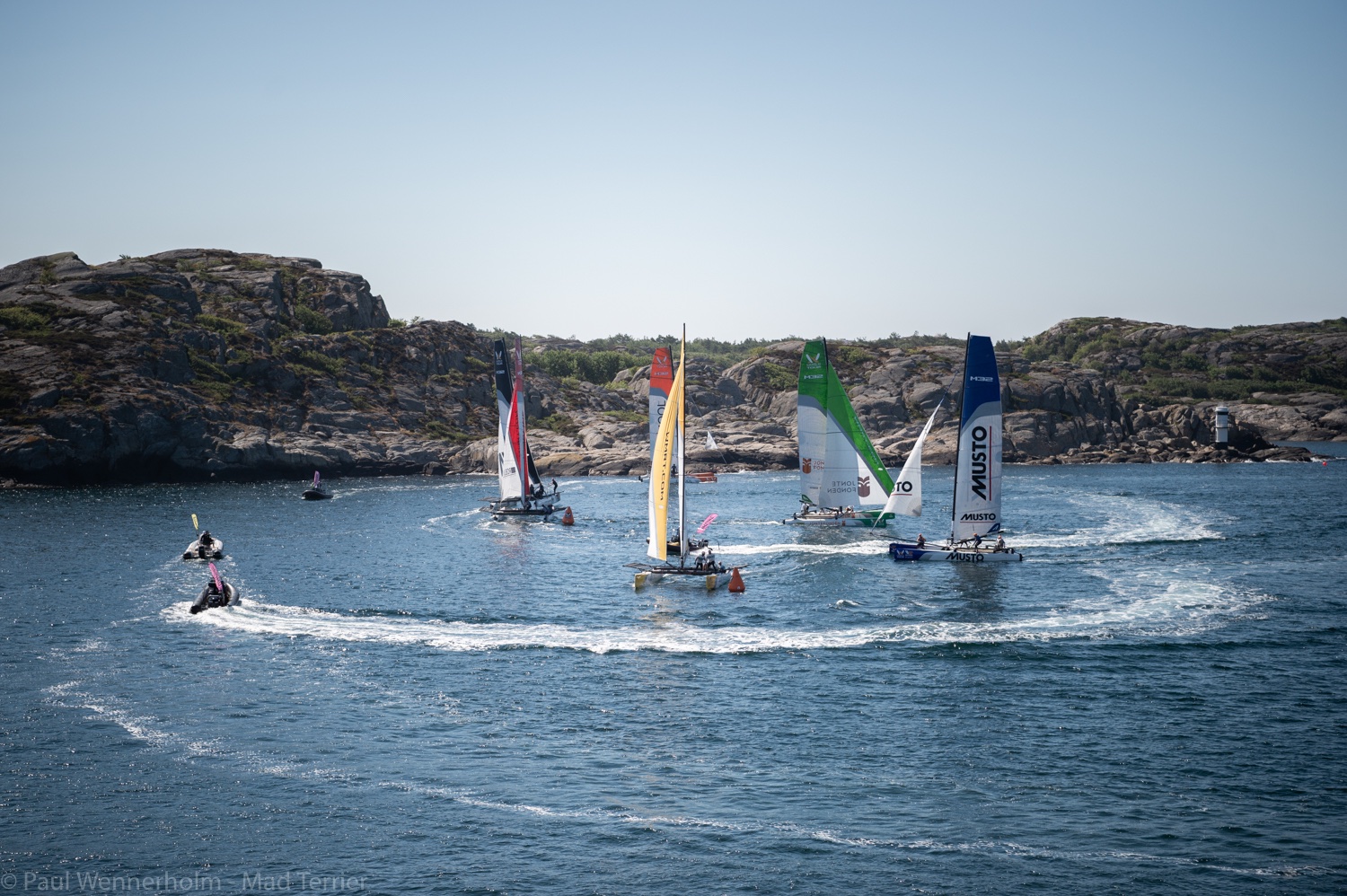 Marstrand, Sweden (July 11, 2018) – Reigning Match Racing World Champion Torvar Mirsky (AUS) laid his mark on the opening round of the 2018 season as he won two from two to kick start his title defence, beginning at GKSS Match Cup Sweden 2018.

Mirsky Racing Team sees two new faces since the win in China last year. Kinley Fowler, from Torvar’s original monohull campaigns, is back along with fellow Aussie Luke Payne. Both bring America’s Cup experience from Oracle Team USA and Softbank Team Japan respectively, which was certainly shown on the race course. “Two wins straight off the bat with the new team, its nice,” said a somewhat relaxed Mirsky on return to land. “When you have a new team, at the beginning of the competition you just wanna make sure you don’t have any dramas. You want to know that what you are working with is gonna work going through the rest of the event. So with this result we are stoked to start so well.”

As the qualification stage continued, Yann Guichard’s all-French outfit stepped up to the plate to deliver a fifth-place followed by there back-to-back bullets in the building afternoon breeze, one of which was a crowd-pleasing photo finish.

“It’s a very good day for us. A great day!” commented Guichard. “It was the first day that we sailed the M32 this year and the first time that we sailed with Matthieu Salamon. I am super happy with this day and very delighted to be back in Marstrand with this great weather. It is going to be a great week ahead.”

Spindrift Racing has been steadily improving, proven with a bronze medal at the last event, the 2017 Match Racing World Championship. With this ongoing momentum and a strong start to GKSS Match Cup Sweden, the French could be looking at their first Championship Level event win, following a win at a qualifier in Alicante as part of the Volvo Ocean Race collaboration.

Sweden’s West Coast has been enjoying a fantastic summer and this week it looks to continue delivering superb sailing conditions. A morning wind from the sea-breeze South West continued to build through the day from 5 up to around 10 knots. As ever when sailing in the shadows of Marstrand's rock face, light airs will provide a “tacticians day where picking the shifts is the key” as Essiq Racing Team’s tactician Jakob Wilson happily pointed out.

Anna Östling, clearly a fan of this type of sailing claimed “amazing conditions, couldn’t ask for more.” As well as competing regularly on the World Match Racing Tour, the WIM Series and at many Match Cup Sweden competitions, Anna and her team were a major part of bringing back the GKSS Women’s Trophy, and ensuring the women race alongside the Open Class in the same boats. “We have been here on shore the past few years and it just feels wrong, but now we are out there where we want to be. I know the other teams are really enjoying it. We are really proud and its so nice all the hard work has paid off.”

At the top of the Women’s Class is WMRT newcomer, Renee Groeneveld and her Dutch Match Racing Team. “Today was really intense racing for us, the boat is quite new we have only done four days together and its just awesome racing.” On the subject of transitioning into the M32, Groeneveld said, “This is just a combination of my sailing campaigns actually. I have done match racing in London 2012 and have done two years in the Nacra 17.”

The Dutch skipper was unaware she was at the top of the leaderboard, but couldn’t stop smiling for the remainder of the interview after discovering her position at the close of day one, continuing. “I don’t event know where we are in the leaderboard actually, we are just taking it race by race and we will see where we end up. We are just enjoying the racing so much and want to do as much sailing as possible.”

This evening was rounded off with the official opening ceremony for GKSS Match Cup Sweden 2018 as all 17 teams were presented to the public and official guests and sponsors.

Both the Women’s Class and the Open Class will take to the water tomorrow morning to complete the Qualifying Stage. Amongst those still to complete their full sailing program is six-time Match Racing World Champion and 2011 Match Cup Sweden winner Ian Williams with his team, GAC Pindar. Also taking to the water again will be local Nicklas Dackhammar, rookie Tour Card Holder Harry Price, Sam Gilmour and Joachim Aschenbrenner, whilst Yann Guichard also sailing will attempt to extend his lead at the top.

Racing will commence at 10:00 local time with the Open Class competition and the intention is to get through the full Repechage Stage by the close of day, leaving the competition with the final eight for the Quarter Finals. In the Women’s class, qualifying will conclude and proceed with the Sail-Off to eliminate one team from the competition heading, the final four heading to the Semi Final Stage.