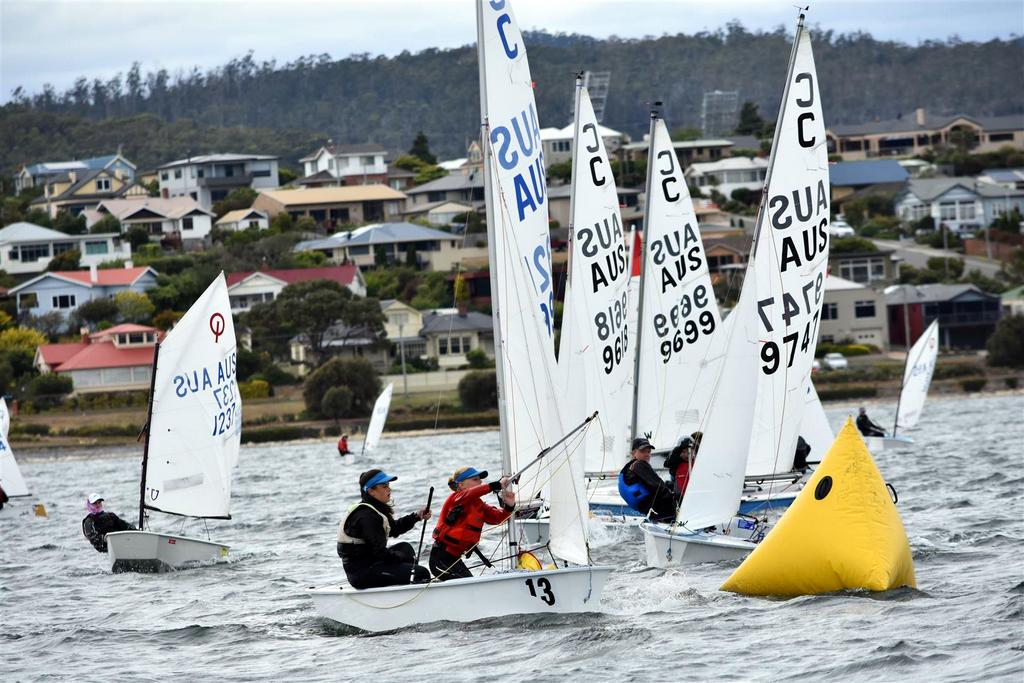 Hobart’s Sandy Bay Sailing Club has a remarkable record in producing Australian and World champions in various off-the-beach racing dinghies, and this week another team of talented and dedicated young sailors is heading overseas for another World championship.

Four crews of International Cadet Dinghy sailors from Sandy Bay, a small club nestling in the sand dunes behind Hobart’s Nutgrove Beach, will join four crews from Victorian clubs in representing Australia at World championships in Germany next month.

The International Cadet is sailed by a crew of two teenagers, with the lightweight crew often as young as nine or ten.

The small 3.2m LOA dinghy carries a Bermuda rigged mainsail, jib and spinnaker with more than 10,000 Cadets built worldwide since designed by Jack Holt in 1947.

Heading the Australian team is Hurricane, helmed by Jacob McConaghy with Sam Hooper as crew. Hurricane is the top ranked Australian boat and McConaghy the team captain.

Sam Hooper and Grace Hooper are brother and sister while Jack Allison and Hugo Allison are brothers.  Hugo is already a world champion, having crewed for another Sandy Bay sailor, Sam Abel, in winning the Cadet worlds in 2015.

The Victorian crews making up the team are: Spitfire (Peter Allen and Ashton Rawstron) from the Royal Yacht Club of Victoria, and from the Royal Geelong Yacht Club, Anaconda (Elliot Hughes and Cate McCoy), Sparkle (Emma Kelly and Ollie Grieve) and Smooth Criminal (Harris Moore and Evie McDonald).

Geelong sailmaker Tony Bull is again the team coach, having achieved two Cadet world champions over the past six years.

Under Bull’s direction the Australian crews are undergoing an intensive training in preparation for this year’s worlds, expected to attract more than 80 strong teams from Great Britain, Germany, Russia, the Ukraine, Poland, the Netherlands, Belgium, Argentina and Australia.

Bull has held two intensive training camps for the Australian team, one at Geelong and the other hosted by Sandy Bay Sailing Club.

Another full-on training camp will be held at the regatta venue at Bodstedt, Germany, from 19-25 July in the week leading up to the Worlds where racing will run from 29 July to 3 August.

In addition to the national training camps, the four dedicated Hobart crews have continued training on the River Derwent up until last weekend.

Sandy Bay Sailing Club will host the next Australian championships for the International Cadet Dinghy class, in January 2019.