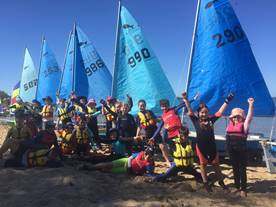 From January 20 to 26 there will be a hive of sailing activity in Paynesville, with some of the best Australian junior sailors arriving for the 40th Australian Minnow Championship, to be hosted by Gippsland Lakes Yacht Club (GLYC).

Competitors aged from 7–15 from across Victoria and interstate will gather to compete in either the Open or Novice divisions. The six day series will consist of 12 races on Lake Victoria and off the Paynesville foreshore.

“Gippsland Lakes Yacht Club has a long tradition with the Minnow class, and is proud to be hosting this milestone regatta,” Commodore Andrew Somerville said.

The inclusion of the Minnow Nationals in the 2018/19 calendar completes what will be a jam-packed season with the Club having hosted the Pacers and Javelin regattas over the New Year, as well as the Marlay Point Overnight Race in March and our annual Easter Regatta in April.

“Hosting the Australian Minnow Championship will provide our growing junior fleet the opportunity to sail with some of the country’s most talented sailors, in a fun, family and friendly atmosphere,” he ended.

A showcase event on the Minnow sailing calendar, the Championship is one that promotes participation, personal achievement and supports talent development.

The region is famous for its beautiful lakes, beaches and waterways, making it the perfect place to showcase some of Australia’s best junior sailors.

Events such as these are a great pathway for future champions in a variety of classes and draw visitors from far and wide, boosting local jobs and economies.

“It is yet another great reason to visit Gippsland and I encourage all Victorians to consider making it part of their summer plans,” the Minister said.

The Minnow class originated in 1974 when Rex Fettell set-out to design an easily built and affordable one-design plywood dinghy which parents would find easy to recognise from the shore. The first Minnow Australian Championship was held on Port Phillip in 1984

Today’s boats are built from both timber and fiberglass, but all still carry a blue sail and are raced in Victoria, Western Australia, Northern Territory and Queensland.

The decision to hold the Championships in Gippsland was an easy one, according to Victorian Minnow Association President, Richard Backwell.

“We’ve been coming down to Gippy Lakes for a number of years now as part of our Travellers Series, and absolutely love it. The conditions are ideal for our junior fleet, and the hospitality of the Gippsland Lakes Yacht Club is second-to-none.”

Come the Championship, GLYC’s team of on-water and off-water volunteers will be in full flight, with around 75 members contributing their time and expertise to the smooth running of the regatta each day.

The event is supported by the East Gippsland Shire and the Victorian Government, with funding provided by both bodies contributing to regatta infrastructure and marketing.

“Events such as the Minnow Nationals are such a wonderful opportunity to showcase our region,” East Gippsland Shire Council Mayor, Cr Natalie O’Connell, said.

“Hosting a junior championship of course not only brings the competitors to the area for the week, but also their families and support crews. Council is a proud sponsor of this event and I am sure the economic benefit to the region will be significant. With the Gippsland Lakes such an idyllic sailing destination, no doubt it won’t be the last time they visit, either.”

The count down to the 40th Australian Minnow Championships has already commenced, with GLYC’s fleet of Minnow sailors preparing on their own shores. A number of local sailors are expected to race, the majority of whom will be competing in their first Nationals.