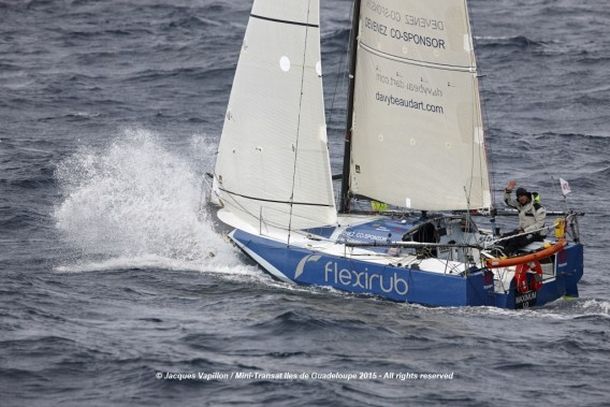 There has been a decided chance of scenery on Mini Transat îles de Guadeloupe. With the arrival of a front, rain and wind have joined the party whilst the boats reach speeds in double digits.

Aboard the Minis, they dropped the VHF and naps to concentrate on sailing the boat. The men from the west came back strongly. This will be without Roman Mouchel, forced to return to port after breaking a finger.

The sailors who took the southern route could congratulate themselves again this morning on the perfect strategy, now need to look behind them, where the cavalry of the western group is closing in on them. When they are going no faster than an average of 6 knots, Davy Beaudart (Flexirub) who is thirty miles further west skims along at more than 12 knots, and trailing in his wake, the larger group from the circuit. At this rhythm, they should be  in the vicinity of the DST Cape Finistere by tomorrow morning.

In the west again.

On board the Minis, the chatty conversations over the airwaves  from the calmer hours have stopped. It ‘s now all about making the boats go more quickly,  while knowing that the wind will ease off somewhat after this front has passed over.  In this changeable sea, the competitors  are mostly sailing under Code 5, the sail  for a slightly lighter wind than a spinnaker.  That urges on the leading boats , as everyone knows that each mile gained counts twice as much as soon as the wind dies down.

In the prototypes, there are variable fortunes: Alberto Bona (onlinesim.it)  sees his throne wobble.  Between Vincent Grison (Roll my Chicken) and Frédéric Denis (Nautipark)  there is almost 10 knots of speed  between them. It’s clear that the cards will be shuffled quickly. There are now about 50 miles’ gap between the leaders and Pilar Pasanau (Peter Punk) who is bringing up the rear in the prototypes .

In the series boats, can the leading  trio of Julien Pulvé (Novintiss), Patrick Girod (Nescens), and Charly Fernbach (Le Fauffiffon Hénaff) fend off the acceleration by Yann Claverie (Map Product)  who has played an intelligent game in the west ? He should also  try to contain the advances of the ambitious Benoît Hantzperg (YCA Dhumeaux Secours Populaire), Ian Lipinski (Entreprise(s) Innovante(s)) et Tanguy Le Turquais (Terréal) who are all bowling along at 10 knots.

The dream of all Mini-ists is to bowl along under a spinnaker. Romain Mouchel is deprived of that at the moment. The diagnosis, relayed by PSP Flamant, seems to confirm that the  sailor has broken his finger and can’t therefore continue in his usual form. For now, Roman is heading towards Lorient before taking a final decision. We’ll have to wait to find out if his taste for adventure will overtake his disappointment about not being able to compete for the leading positions. Whatever the decision, it will be his alone to take, He has about 20 hours at sea to mull over his choices that will be very difficult to take. The Mini transat may be fascinating, but it is often also cruel.

“There are around 20 knots of wind. I’m sailing in between 12 and 16 knots, that’s quick . The moments without any wind have been tough, especially because I didn’t make the right choices. It is a pleasure to sail like this. But the sea is choppy, it is a bit strange.”

“It is great, it’s finally surfing! There are around 16 to 20 knots. I’m sailing in between 12-13 knots with peaks of more than 15 knots. I’m taking the direct route to Cap Finisterre, it looks like we are going to be in for a good sprint.”