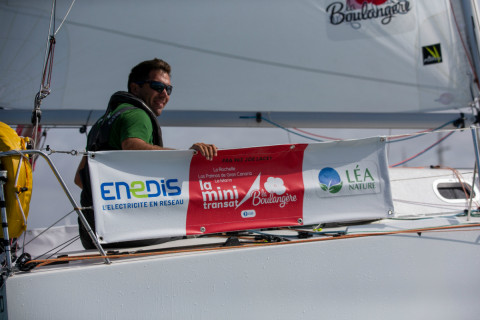 On the third day of racing, the 87 sailors in the Mini-Transat La Boulangère are all still at sea, led this evening by Axel Tréhin (prototype) and Ambrogio Beccaria (production). However, it’s not great news for the Briton Joe Lacey, whose diverting to Gijón where he’ll attempt to resolve his energy issues. The rest of the fleet is on a beat to Cape Finisterre, which the competitors should round over the course of tomorrow, likely with some substantial separation between the leaders and those bringing up the rear. A decision will have to be made about whether to pass to the East or West of the TSS (Traffic Separation Scheme).

This Monday evening, no competitor in the Mini-Transat La Boulangère is really out on a limb. Everyone is in contact with at least one playmate. There must be lots of discussions via VHF, though some will be less keen for distraction… At every level of the fleet, small groups are forming, which is both motivating and reassuring for the sailors. One of the many examples, in the middle of the production fleet, is the four skippers with Minis of a similar generation: Frédéric Bach (533), Sébastien Liagre (589), Irina Gracheva (579) and Kevin Tritschler (550), who are just half a mile apart in terms of distance to the goal.

On the same longitude as the leaders in the production boat category at 14:00 hours UTC this Monday, but very much sailing his own race to the north-west of the bulk of the fleet, likely in the hope of retaining the stronger breeze for longer, Briton Joe Lacey (Earlybird Racing 963) was bang on the pace and had been making the exact same boat speed (over 6 knots) as the top placed skipper in the fleet and favourite for the series win, Italian Ambrogio Beccaria (Geomag 943).

However, over the course of the afternoon, the situation became rather tricky for Joe who got in touch with the support boat (JPK 38 Yemanja) to alert them to his energy problems aboard his new Maxi 6.50. The British skipper is planning a pit stop in Gijón, where he hopes to be able to effect repairs and head back out onto the racetrack to complete this first leg to Las Palmas de Gran Canaria. On a positive note, he is making over 10 knots en route to northern Spain and clearly has no intention of giving up.

Another support boat, the TS 42 Océan Dentiste, sent a message regarding one of the leaders of the production boat category. “Félix De Navacelle on 916 made the most of his passage through a ridge of high pressure to scale his mast last night at around 20:00 UTC, with fleet leader Ambrogio Beccaria keeping watch on his 943. Sporting his helmet and equipped with his GoPro, he went to unravel his VHF aerial and his antenna that got wrapped around each other when the front rolled through. He managed to resolve the issue in under 5 minutes and make sure they were properly intertwined with tape, which will hopefully hold together till the Canaries. He has lost a little VHF range in this war in the bay, which might have been fatal for admiral NKE.”

Having negotiated a zone of high pressure last night, the Mini sailors have been on a beat this Monday in a manageable S/SW’ly wind (10 to 15 knots). The already heavy seas will increase further this evening to reach 3.5 metres. Fortunately, the waves will likely be long (14 seconds), making their passage less uncomfortable. Not very active, a front is set to influence the front runners late tonight and tomorrow morning for those further back. Anticipating the NW’ly wind shift, competitors may choose to pass to the West of the TSS at Cape Finisterre, though this will lengthen the distance to cover…

This evening (18:00 UTC position report), Axel Tréhin (945) is still leading the prototypes, followed by François Jambou (865) and Marie Gendron (930). Among the production boats, the battle is raging between the Pogo 3, with a slight advantage going to Ambrogio Beccaria (943), who is currently outpacing Félix De Navacelle (916), Lauris Noslier (893), Pierre Le Roy (925), Benjamin Ferré (902) and Sébastien Gueho (909). The sailors with the production scow bows are still very much in the game though, including Paul Cloarec (951)and Keni Piperol (956). It’s worth noting that the latter secured 8th place in the first leg of the 2017 Transat after getting off to what he described as a “sluggish start”, and he fought even harder on the second leg to take 5th place in the prototype category taking him up to 4th place in the overall Proto ranking, absolutely smashing his pre-start objective of a place in the Top Ten! It’ll make for interesting viewing to assess their performance in the long downwind runs to come…

Bringing up the rear of the Mini fleet on an Argo is Spaniard Raphaël Fortes (Iparbeltz 858), who worked on oil tankers until a matter of months ago. Speaking to him before the race start, it’s evident that he will just be glad to have done what he set out to do and set sail on this Mini Transat, despite all the odds seemingly being stacked against him, after and an amazing effort, on his part and that of the Race Committee, to satisfy the Class Measurement within the allotted time. And no matter what position anyone finishes, the Mini spirit is such that a rapturous welcome will be reserved for every single skipper by all those who complete the race to the Canaries.