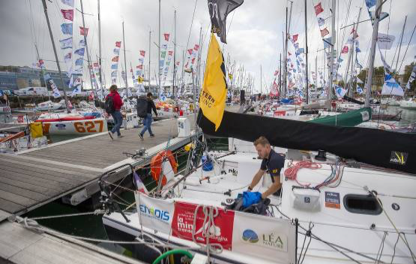 The much-awaited moment is finally upon us, as on Saturday 5 October at 10:30am local time, the 87 competitors in the Mini-Transat La Boulangère will finally take to the start line in La Rochelle for the first leg of 1350 nautical miles, bound for Las Palmas de Gran Canaria.

After a two-week wait (the original kick-off was lined up for 22 September), the sailors are eager and excited to get going, though this is inevitably accompanied by some apprehension.

On the eve of this leap into the unknown, all of them have the weather pattern etched on their brains and are expecting a full-on passage with a whole range of conditions.

Sometimes, 30 days can seem like forever. The women and men competing in the 22nd edition of the Mini-Transat La Boulangère can certainly share this sentiment. However, since Wednesday, they’ve been all set to go.

The Bay of Biscay has become soothed and a fine weather window has opened up.

For the 87 entries, taking the start will be the first great achievement after several years of effort, total commitment and great sacrifice.

The postponement of the start has given the sailors the chance to pamper the boats and set sail with a very satisfactory level of preparation. However, the waiting around and the uncertainty has also meant that their brains were no longer locked into the race.

This Friday though, as they busy themselves with last-minute preparations, loading fresh food, putting their sails in place, analysing the weather in great detail and running the routing software, each of them have rallied their thoughts together and got back in the zone.

“Conditions will be light with a westerly wind of 5 to 8 knots at the start. There will be no windward mark or coastal course around the bay of La Rochelle. It’s time not to waste any time,” stresses Denis Hugues, Race Director of the Mini-Transat La Boulangère.

“Leaving early will enable the racers to have a good day to find their sea legs again before the first night, which is always complicated as you’re always trying to get your bearings a bit.”

Competitors will gently get into their race, even though the swell won’t be insignificant in the Bay of Biscay.

On Sunday morning, there will be a small front to negotiate with the wind shifting round from the south-west to north-west. This medium north-westerly wind should enable the competitors to launch onto a reach (wind on the beam) towards Cape Finisterre.

Next up, competitors will have to traverse a zone of light wind before the arrival of a second front and the establishing of a solid northerly wind, which will propel the Minis along from Cape Finisterre. High speed will be on the menu and the first prototypes could well make the Canaries in under a week.

Reactions from the sailors on the eve of the Mini-Transat start:

François Jambou (prototype, 865): “It’s been a long wait; which has been tough for everyone to deal with. However, the questions are over now and we need to switch to race mode. We’re going to attack this first leg with some technical conditions, close-hauled in light airs.

“The hardest thing to ascertain is the sea state. That could really affect the on-board comfort and the way we trim the sails. I feel fairly serene, but I also know that even with a polished, reliable and well-prepared project, you’re not immune to bad luck. There’s an element of luck in offshore racing.”

Matthieu Vincent (production, 947): “To be honest, I feel slightly apprehensive, but also excited. I’m in the zone, I’m finding it hard to listen to what people are saying to me; my head is already on the water. I’m very focused; I’m going over the race in my mind.

“This first leg is going to be very varied, with a bit of everything being served up. The versatile profiles will come off okay. The main challenge is to maintain a good average speed without breaking and also to find your own pace and not sail your race according to the others. That’s not always easy when you’re very competitive like me.”

Benoît Formet (production, 887): “We’re buzzing; we’ve been waiting two years for this moment! All the waiting around has distracted me a bit. It’s not easy to get back into race mode. The stress is beginning to mount. I didn’t sleep very well last night.

“At the same time, I’m going to set sail in a relaxed frame of mind as I’ve really had time to prepare the boat well. We’re going to set off in fairly chilled conditions, but things will get a bit livelier along the coast of Portugal. With 25-30 knots under spinnaker on a Pogo 3, it’ll be like being on a submarine. It’s going to be very physical and mentally.”

Céline Sallès (production, 514): “I don’t feel particularly stressed. The boat’s more than ready and I’m really eager to get going, put pedal to the metal and head offshore! We’re going to have a bit of a light start with a beat across the Bay of Biscay.

“I hope there’s going to be enough breeze to compensate for the residual swell. Then once we’re past Cape Finisterre we’re going to be pushed along with force so things should be quick with some nice runs under spinnaker on the cards.”

Olivier Le Fichous (production, 721): “Conditions will toughen up from Portugal. I’m going to have to decide whether to protect my gear or if I can go for it. It’ll all depend on my positioning in the fleet and my ambitions.

“It’s shaping up to be a sporty leg with little respite. The postponement of the start enabled us to really get some good rest before setting sail so it wasn’t all bad.”