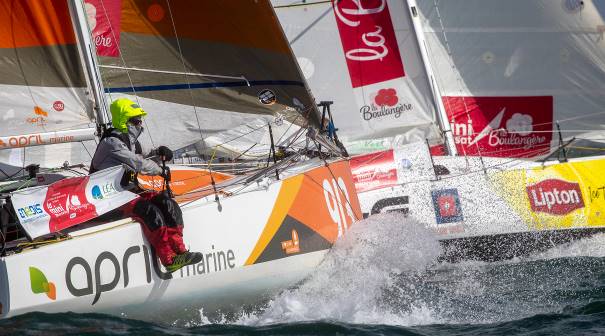 The start date for the 22nd edition of the Mini-Transat La Boulangère is still an unknown, but there is one thing for sure: kick-off won’t be before Friday 27 September. In the meantime, the wind conditions and, above all, the sea state will be too boisterous in the Bay of Biscay and offshore of Cape Finisterre. A more favourable weather window might well open up (or not…) at the end of the week.

The information was passed on to the 87 racers in the Mini-Transat La Boulangère early afternoon this Monday: given the weather conditions, no start will be announced before Friday 27 September.

“Various fronts are sweeping the Bay of Biscay and the sea state is deteriorating. Over the coming days, there might be up to a 5-metre swell in the middle of the Bay, with a short period of 8 to 10 seconds between the waves. And all of that will be in upwind conditions. The boats wouldn’t be able to handle such conditions,” explains Denis Hugues, Race Director, who is studying the evolution of the situation in close collaboration with Christian Dumard, the event’s meteorologist.

“The decision made will take into account the diversity of the fleet and the disparities between the boats in terms of speed. All the racers, including those who are not so quick, need to be able to make Cape Finisterre in suitable conditions. That’s what makes the situation complex,” explains Jean Saucet, technical director of the Mini-Transat.

A favourable weather window at the end of the week?

Each day, a weather report will be sent to the skippers, who will receive at least 48 hours’ advance notice, so as to give those who have left La Rochelle the time to get back. “We’re monitoring a possible favourable weather window at the end of the week,” explains Denis Hugues. “However, we don’t yet have enough visibility as the various grib files are not in agreement. We’re continuing to keep a close watch.”