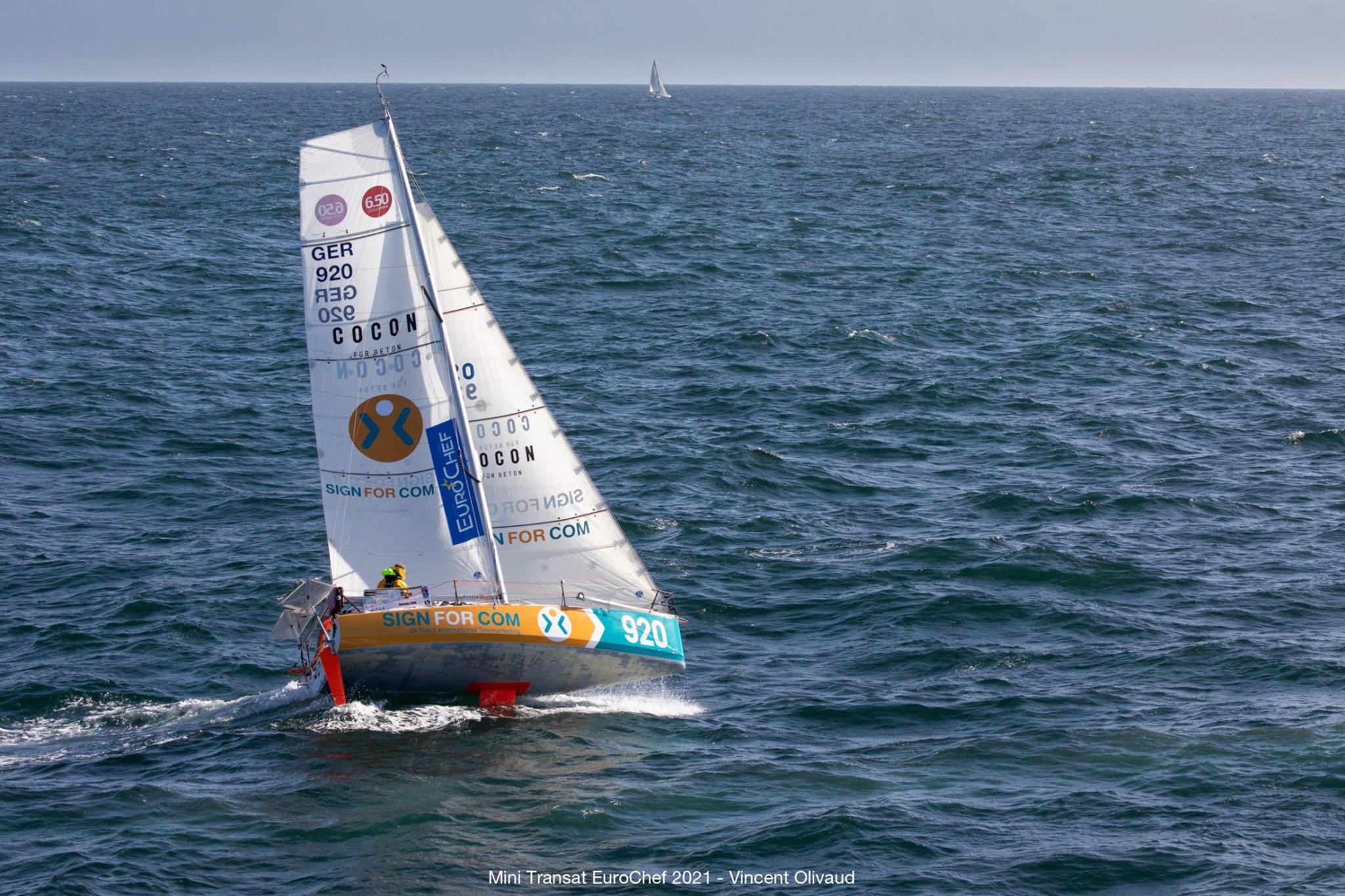 The fleet competing in the 23rd Mini Transat EuroChef is making headway with a very fluky NE’ly breeze both in terms of strength and direction.

As a result, the 84 competitors still out on the racetrack must not only optimise their sail choices but also focus on being in step with the wind. German sailor, Melwin Fink (920 – SignForCom) is proving to be especially adept at this and has been carving out an almost perfect trajectory since yesterday.

This is evidenced by the fact that he has stretched out his lead over Austria’s Christian Kargl (980 – All Hands on Deck) to 140 miles, whilst extending his advantage over the peloton to over 220 miles. The youngster is on a direct course for victory in Santa Cruz de La Palma where he’s expected to cross the finish line between 08:00 and 10:00 UTC on Thursday.

The sailors in the Mini Transat EuroChef will likely benefit from more pressure than forecast as they make for the Canaries. Indeed, the routing simulations which indicated a finish on Thursday evening for the leaders of the series boats, are now suggesting that the German skipper may well cross the line by mid-morning on Thursday (UTC). However, his rivals are now expected to make landfall from Friday morning, with bunches of finishers likely through until Monday evening.

In the meantime, concentration is key as there is between 12 and 20 knots of NE’ly breeze accompanying the fleet, with some sizeable wind shifts at times. Within this context it’s important to adapt your sail plan as best you can and be right on top of your trimming, whilst also absolutely nailing the timing of your gybes.

Melwin Fink, who passed the latitude of Madeira midway through last night, seems to be controlling his trajectory impeccably. Aged just 19, the sailor’s background in dinghy sailing and the many miles he’s clocked up offshore on the family boat, particularly in the Baltic Sea, seem to have stood him in good stead as he’s bang on the pace in the Mini fleet. Over the past few hours, this has notably enabled him to stretch away from the skipper in second place.

Further astern, Hugo Dhallenne also has his foot to the floor. Over the past 12 hours, he’s once more managed to gain the edge over Julie Simon thanks to positioning himself around fifty milles further to the east than his rival, where he is able to benefit from more pressure. Moreover, he is currently the fastest of the fleet, boasting an average speed of 11.6 knots. For him, as is the case for the others, the name of the game is naturally to reduce his deficit in relation to the leader as much as possible and to secure the best possible place on the scoreboard prior to the second leg.

The second leg of the Mini Transat will sadly not include Victor d’Ersu (985 – Babouchka). Indeed, after the sailor from Saint Malo collided with a fishing boat on Monday morning offshore the Portuguese coast, he managed to carry out a complete check of his steed this Monday morning in the port of Cascais. Unfortunately, there is serious structural damage leaving him no other option than to inform Race Management of his official retirement from this 23rd Mini Transat EuroChef.