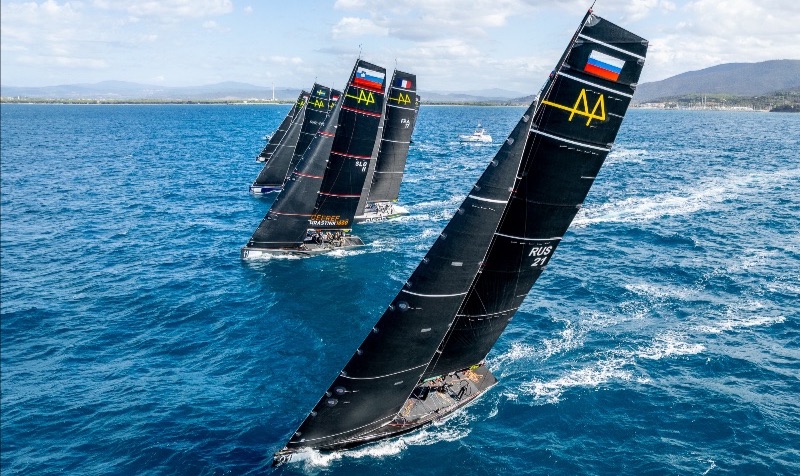 The RC44 World Championship will take place in Italy from October 6-10. Pic - Zerogradinord

Nine teams are in Scarlino, Italy this week to contest the annual RC44 World Championship.

This is fourth event of the 2021 44Cup, following Portorož, Slovenia; Marstrand, Sweden and Cowes, UK, before the circuit concludes with the 44Cup Calero Marinas Lanzarote in November.

This is also the 11th edition of the World Sailing-sanctioned RC44 World Championship since Larry Ellison and his ORACLE Racing team won the first in Puerto Calero in 2010, en route to winning that year’s annual fleet racing season.

Going into this World Championship for the high performance owner-driver one designs, there is a tie for overall lead between two 44Cup titans, Igor Lah’s Ceeref powered by Hrastnik 1860 and Chris Bake’s Team Aqua. Both are on seven points, having respectively won in Portorož and Marstrand, four points ahead of Hugues Lepic’ Aleph Racing, winner of the inaugural 44Cup Cowes event in August.

Igor Lah has raced in Scarlino before, but some years ago, in a different class. “I know it a little – I think it is a marvellous place. And you have Tuscan wine!” Lah’s team was recently rechristened Ceeref powered by Hrastnik 1860, after receiving backing from a Slovenian high quality glass company, renowned for manufacturing cognac and vodka bottles internationally.

As to their performance, his team, on which Britain’s Adrian Stead is tactician, is no stranger to having the 44Cup leader’s golden wheels fitted. “For now, everything is fine, we should improve a little bit, but I made some mistakes. I have to work on them. But we are getting better and better,” said Lah.

A newcomer to the 44Cup for this event is the circuit’s first ever female owner-driver. While some women have been reserve helmsmen for teams, Moscow-based lawyer Valeriya Kovelenko is the first officially and has put together her ArtTube team with tactician Igor Lisovenko, who represented Russia twice at the Olympic Games in the Laser dinghy.

Kovelenko has been campaigning a J/70 for the last five years and in the smaller sports boat has twice won the competitive Monaco winter series as well as the Russian National Championship. Her crew comes from the J/70 as well as the former 44Cup teams, Synergy and Kirill Podolsky’s RUS-7.

“A lot of my crew sailed in the RC44 and have great memories of the class. For five years it has been my dream to join it,” said Kovelenko, who knows RC44 owners Vladimir Prosikhin and Nico Poons from racing them in Monaco and in Russia. “I am happy to be sailing in the World Championship. Thanks to Bertrand [Favre, Class Manager] and Jessica [Gray, Event Manager] for making this happen to us.”

Kovelenko is racing here on the 44Cup’s class boat. This is available for teams interested in joining the circuit. “The RC44 Class Association makes the boat available, ready to go with sails, etc and covers the insurance and transport to events. You just have to bring your own crew,” explains Favre.  “We have a lot of interest.”

Two points short of the podium on the 44Cup leaderboard is Nico Poons’ Charisma which is having an up and down season after their second place in Marstrand. For Pavel Kuznetsov’s promising team led by Evgeny Neugodnikov on Atom Tavatuy, they are showing more consistency but would prefer that this was on the podium rather than mid-fleet.

Uncharacteristically closer to the bottom of the leaderboard than the top is Vladimir Prosikhin’s Team Nika. Since their second place in Portorož, their performance has plummeted. “We started this season very well, but then we found some areas to work on and we are doing that and we are hoping to get better at this event,” admits tactician Manu Weiller.

Alongside Aleph Racing’s Michele Ivaldi, Weiller, despite coming from Spain, is the 44Cup tactician with most experience racing in Scarlino. He has won several events here in other classes. “It is a very nice place, with many different conditions. It can be shifty, from offshore and with waves and wind outside or very light from the south. We might see a bit of everything this week. And it is a beautiful place…”

Bringing up the rear are Torbjörn Törnqvist’s Artemis Racing, which finished third at their ‘home’ event in Sweden and John Bassadone’s Peninsula Racing. During practice racing today, Peninsula Racing had a special star guest helm in Hubert Detrey, who fulfilled his dream of steering one of the RC44, after years managing the hospitality program for the 44Cup.

The RC44 World Championship starts on Thursday with a first warning signal at 1200 (local time) and will conclude on Sunday.

For more information on the event, see: https://www.44cup.org/