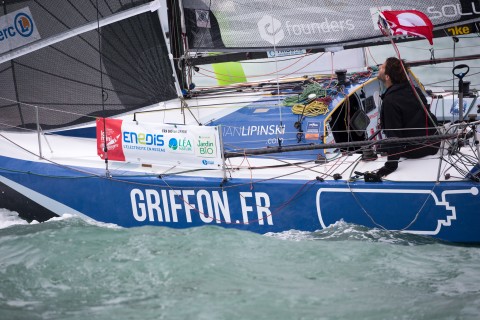 Between the islands of Santo Antao and San Vicente, the competitors have to make their way along a channel spanning seven miles wide. The passage through the gate will give a precise idea of how everyone is ranked as well as drawing up an initial hierarchy prior to making the big leap across the Atlantic from which there is no way back.

They are there. In fact, at the head of the fleet, Ian Lipinski (Griffon.fr) and Simon Koster (Eight Cube Sersa) got through it some time ago after a little hook southwards to distance themselves from the wind shadow created by the mountains of Santo Antao, which culminates at nearly 2,000 metres.

With the disturbed cone of breeze able to influence play as far as 30 miles out, we can well understand the prudence of the top two, who didn’t want to play with fire. Particularly so with three rivals in hot pursuit, Jörg Riechers (Lilienthal), Romain Bolzinger (Spicee.com) and Charlotte Méry (Optigestion – Femmes de Bretagne), who would certainly have snapped up the opportunity to play catch-up.

Behind this leading group, Andrea Fornaro (Sideral) is likely to be first of the chasing pack to negotiate the channel, just ahead of Kéni Piperol (Région Guadeloupe), who has made a great comeback after a prudent start. However, they’ll have to keep an eye out for Aurélien Poisson (Teamwork) who could really close the gap thanks to an option a long way to the south.

It should be roughly the same set-up for Pablo Torres (Bicho II Puerto Sherry) against the group of rivals slightly further to his north made up of Fred Guérin (Les-amis.fun), Jonathan Chodkiewiez (Tasty Granny) and Julien Héreu (Poema Insurance). However, Julien is bound to have other things on his mind today since he celebrated his twenty-fifth birthday on his own albeit with a pot of Nutella, a packet of M&Ms and some spicy sausage… Presents have a sentimental value at sea, the likes of which you find nowhere else.

In the production boat category, the ranking is fairly consistent for now among the top five led by Tanguy Bouroullec (Kerhis – Cerfrance). Aboard Océan Dentiste, one of the support boats, the crew has been endeavouring to get some news from the competitors, though it often boils down to a rather laconic “nothing to report”. The only solid information has come from Marta Guemes (Artelia), who reported that she’d broken the halyard of her large spinnaker, but had managed to switch over to a spare one.The big catamaran also passed close to Victor Barriquand (Charente Maritime) and the crew was able to note that all was well aboard.

The passage through the Cape Verde islands will be an opportunity to draw up a provisional ranking before attacking the Atlantic. From Thomas Dolan (offshoresailing.fr), sixth in the production boat category, and Camille Taque (Foxsea Lady) tenth of the prototypes, a large part of the fleet is likely to negotiate the channel under the cover of darkness. For them, it’ll be important to be particularly vigilant to the last minute wind shifts. Fortunately, the full moon should make the exercise a little less harrowing than in the pitch black.

Race against the clock

There are two others for whom the passage through the Cape Verde islands is a way off yet. Boujdour, skippered by Dorel Nacou (IxBlue Vamonos), has already had her mast sleeved with the help of some generous people who have spontaneously come to the skipper’s assistance. The sailor hopes to head back out to sea as quickly as possible, the moment the repair has dried. In Dakar, there is a group of people rallying together to welcome Erwan Le Mené (Rousseau Clôtures), who is set to make landfall there at first light tomorrow morning.