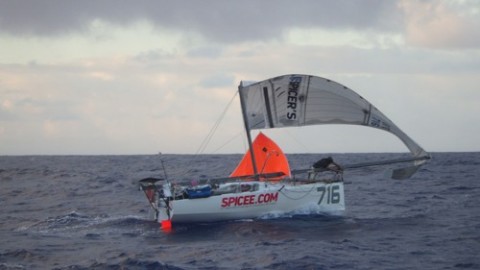 The better it is, the less it changes… In fact, the rankings are looking increasingly similar with every passing day. Even the more or less radical options are failing to shake up the hierarchy of the skippers’ respective positions. However, the situation may well evolve from Sunday onwards.

The skippers are continuing to tick off the miles, day in day out. Indeed, each day of a Mini sailor’s life is relatively active, amidst fitful sleeping, manoeuvres, navigation and maintenance of the boat.

The typical day begins at daybreak, the perfect time to get back to reality, especially given how testing it is to be on watch late into the night and through into the early hours. As such it’s best to get a few minutes shut-eye whenever conditions allow. However, the taste of a breakfast, brief as it may be, alone on the ocean as the sun peeps over the horizon in the east, is simply beyond compare.

It’s time for the day’s first VHF audio session with the support boats, when they are in range that is. Next up, it’s over to fine-tuning the trim and even putting in some time at the helm, just to get an idea about whether it’s the skipper or the autopilot that performs best. We mustn’t forget a spot of stacking too, as the wind is never totally stable in terms of strength or direction.

Then it’s the hallowed time of the weather report issued by Race Management. This involves pinpointing the centres of any active pressure and noting the wind forecasts before switching over to the rankings. Each competitor is allowed to view the distance in relation to the goal for themselves and everyone else. What begins then is the daily conundrum: trying, in light of the weather forecasts and daily progress of any direct rivals, to position them all on the race zone. The craziest assumptions may well be contradicted at the finish when the time comes to look at the cartography archives around a rum punch.

There are always a thousand and one things to do on a Mini of course. Checking your gear and looking for any signs of wear or chafing on the sails, doing a spot of sewing or a bit of whipping to effect repairs or make sure things last, casting an eye over the helming system and the rig… Meantime, certain sailors treat themselves to a musical interlude, immerse themselves in a book or film their adventure. These asides are obviously a lot less evident aboard the leading boats, given that daggers tend to be drawn in the battle for the top spot!

In the current season, it’s not uncommon for fronts to upset the usual wind patterns. In this way, on Sunday 12 November, an easterly wave of breeze is likely to stir things up considerably amidst the trade winds and this may well extend as far as 19°N. As such, the whole fleet is likely to have to contend with weak winds, the direction of which will be more or less random. For the favourites, this means that it may well be game on once more in the hunt for the crown.

Ian Lipinski (Griffon.fr) now boasts a sufficient lead not to be overly alarmed by these shenanigans. However, in the production boat category, the situation could well be turned on its head and Erwan Draoulec (Emile Henry) and Clarisse Crémer (TBS) could see their rivals biting at their heels once more. After adopting a radical southerly option, the likes of Tanguy Bouroullec (Kerhis Cerfrance) may well be among them.

Others don’t have to deal with such problems. Patrick Jaffré (Projet Pioneer), like Antoine Cornic (Destination île de Ré), can no longer get the best of his boat’s potential. The former is having to take time out to repair his rudders and Antoine is suffering from limited power aboard, which is forcing him to reduce his sail area in order to get some sleep. The only consolation for them will be knowing that they are not alone in their misfortune. Indeed, after dismasting yesterday, Romain Bolzinger (Spicee.com) stands little chance of exceeding an average speed of four and a half knots with his jury rig as he continues determinedly to make for Martinique. At the current pace this will likely take around thirteen days at sea.