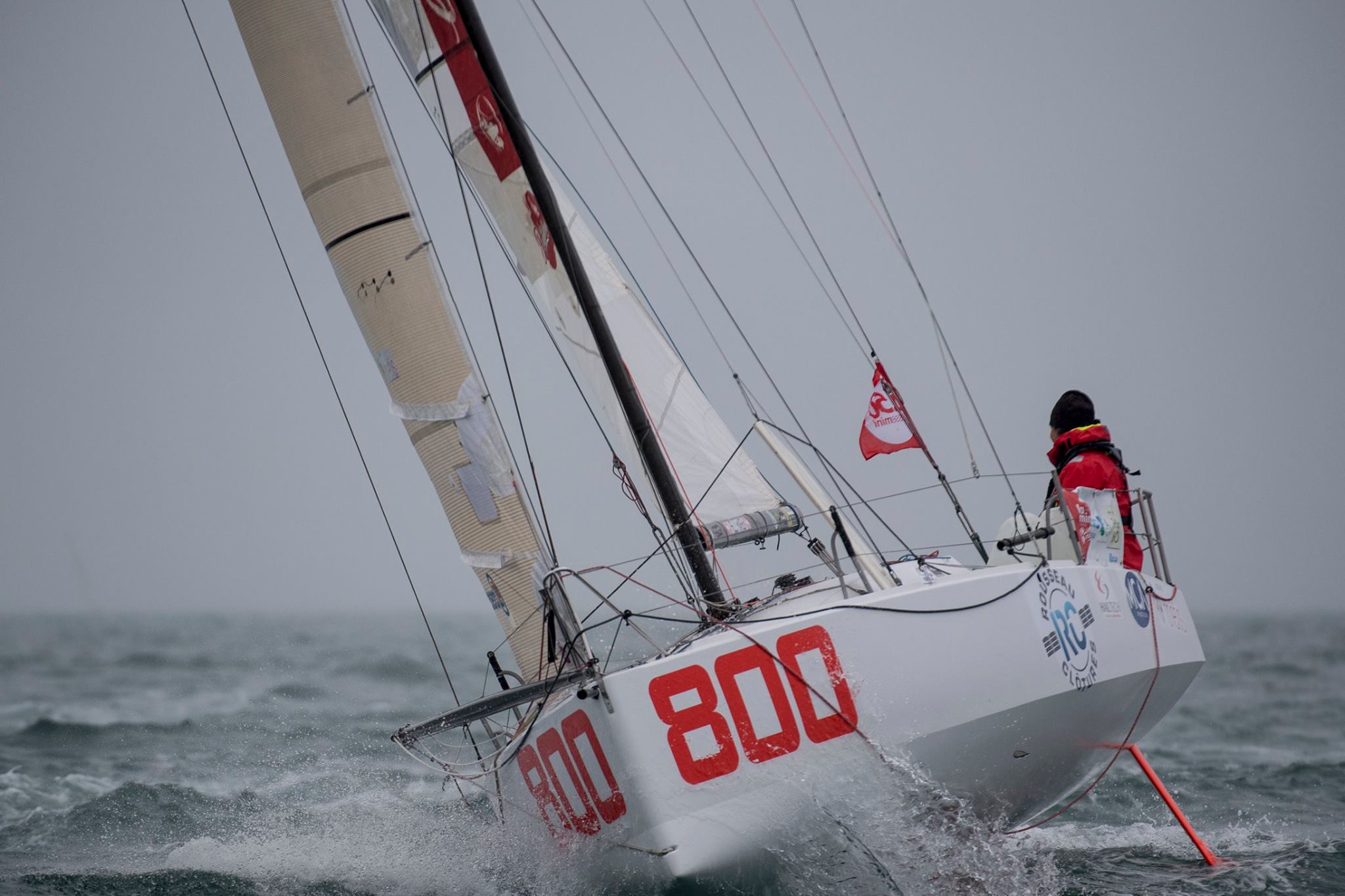 The first 24 hours of a race like the Mini-Transat La Boulangère are a funny old time. Whatever we say and whatever we do, it takes time to adapt before you can power along at your full potential and really enjoy being at sea. This is particularly true when the weather’s not really on your side: grey skies, rough seas, upwind sailing. The tough times will give way to better days in the fullness of time of course.

The first 24 hours are now in the wake of the Mini-Transat La Boulangère fleet. For all that, the switch from one world to another hasn’t gone without its share of difficulties as a result of minor preparation issues and the time required for the solo sailors to get into the swing of things.

Seasick but not sick of the sea

Enemy number one for some at the moment is sea sickness. At this morning’s audio session, certain sailors admitted feeling a little under the weather, including Julien Bozzolo (Mariolle.fr), François Denis (So-Boat.com) and Arnaud Etchandy (Ipar Hego). They’re surely not alone in this, but at the front of the fleet the leaders are already being careful not to disclose any signs of weakness as tradition dictates.

The first hours of racing can also have their share of nasty surprises. Contrary to professional skippers, a Mini sailor rarely has a dedicated ‘préparateur’ or shore crew. Indeed, when it’s not the racer himself or herself, friends often step in to make sure the boat is ready to go within the time limit. In these conditions, it’s hard to be totally shipshape and some sailors are lamenting minor issues which, though not dramatic, can make life awkward in these initial hours of racing. In this way, Julien Héreu (Poema Insurance) has been trying to resolve an issue with his generator, whilst Marc Miro (Alfin) has reported difficulties getting his AIS to work. Meantime, Irish skipper Thomas Dolan (Offshoresailing.fr) has had to retrace his steps after realising that he’d failed to respect the course marks at the coastal course gate. Italian Matteo Rusticali (Spot), who set sail at the helm of the oldest boat in the race, built for the Mini-Transat 1991, has sadly dismasted and was originally making for La Rochelle under jury rig. Given his course, it would seem that he’s now opted instead for the mouth of the Gironde estuary to make landfall.

For now, the remainder of the fleet is trying to contend with a system of prevailing westerlies. All in all, everyone had opted to sail on starboard tack taking them towards Cape Ortegal. With the wind kicking back in from the west, the first choices will have to made: continue along on the same tack or make headway to the north? The weather forecasts are announcing the arrival of a front via the north-west, which should generate some north-easterly wind off its back. By continuing on their tack, the sailors may be in with a chance of closing on the tip of Spain and reaping the benefits of a wind that will ultimately provide everyone with downwind conditions. By making headway to the north, it should be possible to anticipate the arrival of the front to ensure they’re first to benefit from the wind shift. At the head of the fleet, the skippers appear to have opted for the second solution, with the exception of Romain Bolzinger (Spicee.com)). Leading the march, Erwan le Mené (Rousseau Clôtures) once more has the edge over Ian Lipinski (Griffon.fr) but there is little separating them. Behind the leaders, three sailors are managing to keep pace: Aurélien Poisson (TeamWork), who has really been on his game since the start of the race, Jorg Riechers (Lilienthal) and Charlotte Méry (Optigestion – Femmes de Bretagne).

Among the production boats, a number of competitors thought Rémi Aubrun (Alternative Sailing – Constructions du Belon) would be the one to beat, even though he’s done little racing this season. A quick look at the cartography would suggest they were right to be wary as he’s keeping a firm hand on Erwan Le Draoulec (Emile Henry), the latter just two tenths of a mile in front. Valentin Gauthier (Shaman – Banque du Léman) completes the current podium. Also worth noting is the fine performance posted by the Czech sailor, Pavel Roubal (Pogo Dancer), who is just two miles shy of the leaders, despite some complicated training conditions for this sailor, who divides his time between his life in Brno and the Med. Prior to the Mini-Transat, Pavel took a break from sailing to recharge his batteries and spend the summer with his partner and his daughters. His method seems to be paying off…