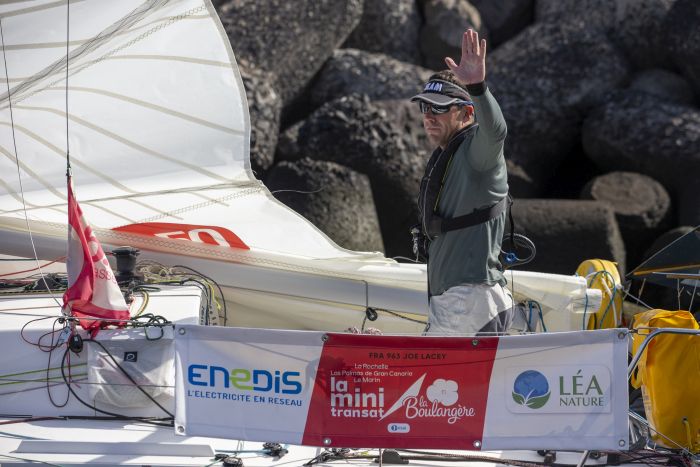 After a little over eight days of racing, the fastest of the fleet have already completed two thirds of the 2,700 miles between Las Palmas de Gran Canaria and Le Marin in Martinique. According to the latest routing from Race Management, François Jambou and Ambrogio Beccaria, leaders of the prototype and production fleets respectively, might well make the finish this Thursday.

Meantime, Briton Joe Lacey has had to receive assistance from a support boat so he is officially out of the race but is valiantly continuing on to the finish. Italian Matteo Sericano reported his retirement this evening, following a collision with a floating object, which has seriously damaged the keel of his prototype. As a result, 80 sailors are still officially racing despite some far from simple conditions in this 22nd edition of the Mini-Transat La Boulangère.

Being the first to make Martinique and savour victory (and rum) and being there to welcome in all the rest of the fleet might well be something that François Jambou (865) and Ambrogio Beccaria (943) are starting to mull over now. However, they are both experienced enough to know that concentration is still key with a third of the course to go and their pursuers waiting in ambush in case either of them slips up.

In the prototype category, Axel Tréhin (945) has been relegated to 100 miles astern of the leader. Meantime, Erwan Le Méné (800) and Tanguy Bouroullec (969) are neck and neck, slugging it out for 3rd place. With a little N’ly separation, German sailor Morten Bogacki (934) remains very much in the match to play catch-up too. In the production fleet, a spot on the podium is particularly highly prized. At the 16:00 UTC position report, Nicolas D’Estais (905), Benjamin Ferré (902), Pierre Le Roy (925) and Félix de Navacelle (916) were grouped within ten miles or so of one another, on the hunt.

Respectively some 867 to 932 miles from the finish at the 16:00 UTC position report this Sunday, François Jambou and Ambrogio Beccaria have eked out fairly substantial leads. However, prudence is a prerequisite as the men and the gear are tired and conditions are not easy with heavy seas. Moreover, their passage is littered with numerous squalls bringing significant rain and above all winds that could reach 35 to 40 knots. As such, wipe-outs can occur at any moment and this squally weather is set to last for at least three days.

Briton Joe Lacey continues his race albeit it unofficially

Yesterday, a support boat sailed alongside Joe Lacey (963) and ultimately a member of the crew climbed aboard the Mini 6.50 to assist him with repairing his tiller pivot. The issue was eventually resolved and the sailor has since been able to continue on his way. However, given that he received outside assistance, Joe Lacey is no longer officially racing, which is sure to be a bitter disappointment to the Briton who has given his absolute all throughout this race.

Matteo Sericano has also suffered a major setback tonight. Having set sail from Mindelo yesterday after repairing his rudder, the Italian quickly turned back, this time as a result of hitting a floating object which has severely damaged his keel. Matteo has attempted in vain to repair it but has since had to announce this retirement this evening.

This morning, Julien Letissier (869) was no longer being located on the cartography for the Mini-Transat La Boulangère. His beacon had failed and at today’s link up Race Management asked him to switch tracker. The message has clearly got through via the support boats since Julien has reappeared on the 16:00 UTC cartography and is in 12th place in the production fleet.

Where are we at with the female sailors?

Eight women (seven in the production boat fleet and one in the prototypes)  took the start of the Mini-Transat La Boulangère and all of them are still racing. In the production category, best placed is Amélie Grassi (944) who’s sailed a blinder after setting sail from Las Palmas de Gran Canaria a good dozen hours or so after the rest of the fleet in 61st position. This evening, Amélie is in the Top 15. Hot on her heels is the youngest sailor in the race, Violette Dorange (955), who seems to be into a good rhythm after a first leg marred by energy woes aboard her boat. On her Ofcet 6.50, Anne Beaugé (890) is also enjoying a great race (20th place at the latest poll). She’s one of the best placed among those skippers not sailing Pogo 3s or Maxis.

Relatively deserted on the race zone, albeit in the top part of the fleet, Russian Irina Gracheva (579) is carving out a fine course aboard her trusty Mini launched nearly 15 years ago. And even though there is still a long way to go, Axelle Pillain (781) and Céline Sallès (514) also look to be on track to pull off their gamble of crossing the Atlantic Ocean on a Mini. Tonight they’re at the midway mark in 40th and 48th places. Meantime, Belgian sailor Marie-Amélie Lénaerts (833) is demonstrating great determination with regards to sorting out her technical woes at sea. Making slow progress throughout yesterday, she’s back up to speed today and continuing on her way. Just one woman is competing in the prototype category, Marie Gendron (930). Hurriedly returning to Las Palmas due to keel issues and a problem with her bowsprit, Marie has since been courageously hurtling along on a S’ly option in a bid to try and catch up with the rest of the fleet.