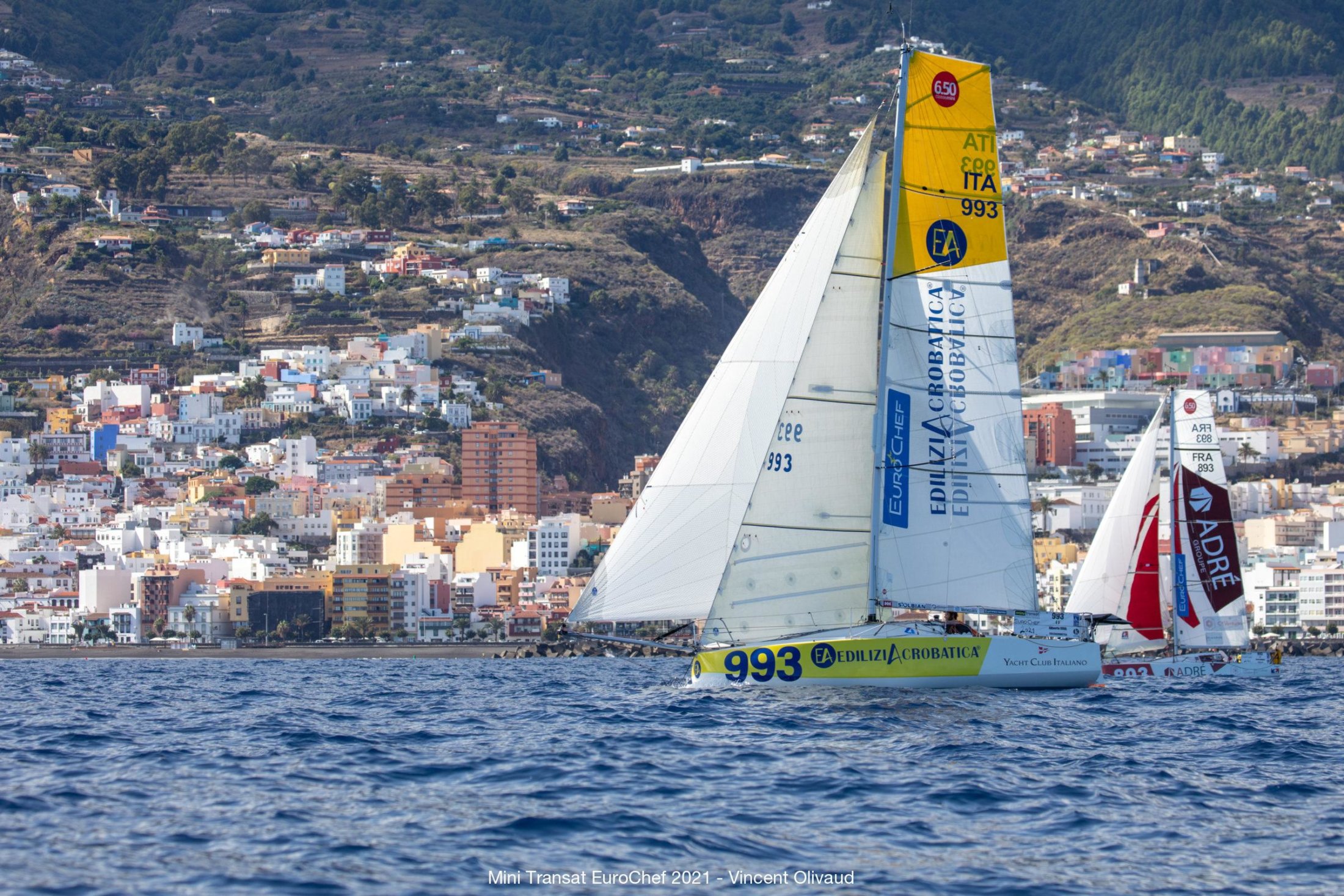 As announced yesterday, the trade winds are now sharing out breeze pretty fairly across the whole of the race zone in the 23rd Mini Transat EuroChef.

As a result, the competitors furthest north are now benefiting from similar conditions to those enjoyed by their rivals further south. Consequently, the differences in speed is fairly minimal all of a sudden, with those skippers further along the racetrack boasting a slight edge.

The reason for this is that as they approach the West Indies, the wind is becoming increasingly vigorous. The added punch is sure to inspire the sailors, whose goal right now is to be as quick as possible, whilst exploiting the many variations served up by this famous north-easterly breeze, along with the odd squall that’s beginning to spice things up a bit.

Yesterday was always going to be a big day for those favouring a route in the deep south. Still benefiting from more pressure than their adversaries further to the north, the latter have made the very best of the conditions to rack up precious miles. This has naturally led to a few gaps opening up or being created within the fleet. For example, the top six in the position report were grouped within 65 miles of one another two days ago. Today, there is nearly 200 miles between them.

Though Fabio Muzzolini (945 – Tartine sans Beurre) has shown a real burst of power, taking the speed title in the last 24 hours and repositioning himself in second place in his category in the process, Pierre Le Roy (1019 – TeamWork) has also reaped the benefits of his option. The two men are now leading the fleet across the Atlantic with a lead of 57 and 102 miles respectively ahead of the third placed skipper, Tanguy Bouroullec (969 – Tollec MP/Pogo).

The gapping between the fleet is beginning to count now, especially when you start to put things in perspective. Indeed, it’s worth noting that in the overall ranking drawn up after the first leg, the skipper of the Pogo Foiler was lying in first place with a lead of at least one hour over the two runners-up. The fortunes of those same two skippers are increasing too.

However, there is one little glitch on the horizon for them: continuing to drop southwards today would only serve to extend the distance they must sail. As such, although they’re benefiting from a better angle in relation to the wind to lengthen their stride, they’re less able to exploit the many wind shifts.

Full throttle without putting too much thought into it
It’s the same scenario among the production boats. Positioned the furthest south of the fleet, Italian Alberto Riva (993 – EdiliziAcrobatica) has managed to hoist himself into second place over the past 24 hours. However, the prize for the most miraculous comeback has to go to Hugo Dhallenne (979 – YC Saint Lunaire). The skipper from near Saint Malo, who was second at the end of act one, has been posting a dazzling performance for some days.

Still lying in 27th place some 70 miles shy of the first boat last weekend, today he’s achingly close to a top five spot, less than 20 miles behind the leader of the gang, Loïc Blin (871 – Technique Voile – Les Entrepreneurs du Golfe). Incredibly, he racked up 236 miles between yesterday’s noon position report and the one from the same time today. That is a staggering five miles better than the fastest prototype and an average of 50 miles more than these rivals over the same timeframe!

“In the first leg, I must admit that I sailed with my foot to the floor without really sparing my steed. In this second leg, the plan is pretty much the same. I’m intending to sail flat out in the hope that the machine and the sailor can go all the way,” explained the sailor on 29 October, start day for this second leg. It has to be said that he’s followed through on that to the letter.

However, there are still a number of players out on the racetrack who are yet to have their final say. With 900 miles to go, the top fifteen boats are grouped within 50 miles of one another and on the hunt. As ever then, it’s absolutely anyone’s game.